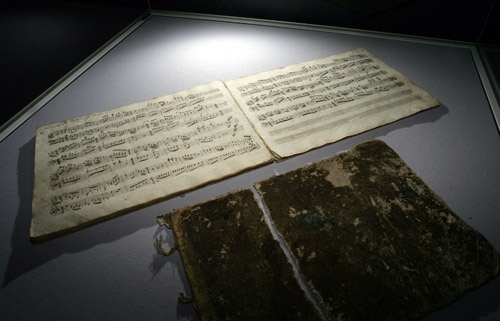 Mozart is still generating hits - millions of them, in fact.
A jubilee year of celebrations marking the 250th anniversary of the composer's birth ended Friday with a flourish - as a harpsichord player tapped out a posthumous premiere of a previously unknown tune, a new online database of all of Mozart's works got its 20 millionth page view.
"The interest exceeded even our boldest expectations," said Ulrich Leisinger, head of research at the International Mozart Foundation, which added two extra Web servers to handle "hits" after it launched the 24,000-page Internet catalog earlier this month.
Underscoring how Mozart's music is still winning him fans on every continent, reclusive North Korea's state symphony orchestra performed "The Marriage of Figaro" and other works at a concert this week in Pyongyang, the North's Korean Central News Agency reported Friday.
In Salzburg, where Wolfgang Amadeus Mozart was born on January 27, 1756, unsigned sheet music found sandwiched between the pages of a tattered old notebook - acquired a few months ago by the city's Roman Catholic archive - was performed.
Classical music scholars and local officials sat in rapt silence as "Allegro di Wolfgango Mozart" was played on a harpsichord, Mozart's favored instrument, in one of several concert halls that regularly hosts performances during the annual Salzburg Festival.
The short piece took only 2 1/2 minutes to play.
"We can't yet prove conclusively that the allegro is a Mozart composition ... but the connection to Mozart is clear," the Austria Press Agency quoted Mozart researcher Christoph Grosspietsch as saying.
More study will be needed before the tune is assigned a number and officially catalogued as a Mozart work, he added.
Other experts who attribute the allegro to the young Mozart said they believe it probably dates from before 1769 - when he was 13 - and that he may well have penned the piece even earlier, at the tender age of 6 or 9.
"The context, as well as the music, strongly suggests that the piece can be attributed to the young Mozart," Ernst Hintermaier, director of the Archdiocese of Salzburg's archive, said earlier this week.
The piece was premiered as a year of Mozart concerts and exhibitions held around the globe winds down.
It got off to an unusual start last January with a much-hyped documentary aired on national television about a new DNA analysis of a skull some say belonged to Mozart. The tests were inconclusive.
Mozart died in 1791 at age 35 and was buried in a pauper's grave in Vienna.