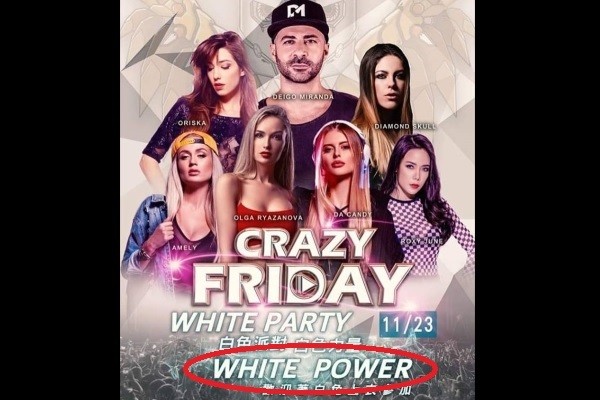 TAIPEI (Taiwan News) -- Foreigners in Taiwan are aghast at an apparent translation gone horribly wrong in an advertisement posted on Facebook on Monday (Nov. 19) by "Tainan's Trump," which used the term "White Power" and features a lineup of almost all white DJs.

On Monday, Tainan mayoral candidate Mark Lin (林義豐) posted a Facebook advertisement for two free concerts to be held in Pingshi Park and Nanying Green City Park on Friday (Nov. 23), the eve of Taiwan's elections, with the title "Crazy Friday White Party White Power." The caption for the ad in Chinese reads:

"'Crazy Friday International Musci Festival'" only supports No. 3 Lin Yi-feng. Tainan final home special plan. White Party, White Power. On the day of 11/23 let us all wear white shirts together. Create Tainan's greatest white frenzy. On 11/23, the eve of the election, get high and turn over all of Taiwan, Tainan Pingshi Park, Nanying Green City Park. Admission to two stage performances is free."

In addition to using the term "White Power," which in the West is associated with white supremacist movements such as the Ku Klux Klan and Nazis, six out of the seven artists featured in the ad appear to be Caucasian, thus reinforcing the impression that it is somehow glorifying whiteness. To add insult to injury, Portuguese DJ Diego Miranda's name is inadvertently misspelled as "Deigo," which can be a variant spelling of the racial slur "Dego," a term used to denigrate Italians.

However, Lin does not shy away from controversy with his wild "Crazy Friday" (虧雞福來爹, kuixi fulaidie) events, which also earned him the nickname Crazy Friday among his followers. On Sunday (Nov. 18), he gained media attention for taking his shirt off to show that, despite his advanced age, he is still fit for the job.

Because of his background in business and flamboyant persona, he has been dubbed as "Tainan's Trump," a title he readily embraces. Like Trump, The 70-year-old tycoon made his fortune in real estate and is only now entering politics.

When asked by ETtoday to comment on being dubbed "Tainan's Trump" Lin said, "If I was president of the United States, I might be even better than Trump, I'm quite confident."

Lin is trying to appeal to young voters by holding regular rallies with popular DJs, and if elected, he promises to offer subsidies to aid young adults purchasing homes and having children.

When asked to comment on the advertisement, Lin sent Taiwan News the following statement:

"Sorry for the confusion. Because white power is seen as 'colorless' and 'pure' in Taiwan, Taiwanese would understand that it has absolutely no meaning of racial discrimination. We are very sorry for the confusion caused by such words. We also welcome advice on the more accurate usage. We will improve."

When asked to comment on the reference to white power in the advertisement DJ Olga Ryazanova's spokesperson Fernando Vieira wrote:

"With all respect I don't see racism in this event. By the way, I ask why white power and they told me in Tainan it’s mean pure clean ( they say ) We are not racist." Following the backlash over the use of the term white power, the poster has been changed to say "Tainan Power." 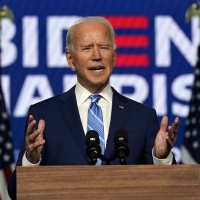