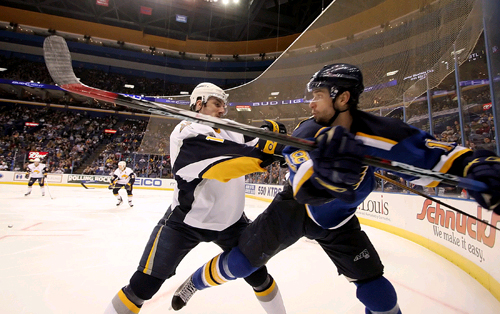 The press box at Pepsi Center is lined with photographs that detail the Colorado Avalanche's exploits in Denver.
Joe Sakic, Peter Forsberg, Patrick Roy, Claude Lemieux, Rob Blake, Ray Bourque will probably all land in the Hockey Hall of Fame, if they haven't already. Mix in quality role players such as Mike Ricci, Adam Foote, Mike Keane, Milan Hejduk and Chris Drury, and you wonder how these guys ever lost.
Then it hits you: this group won only two Stanley Cups. This is the team the Dallas Stars beat twice to reach the Finals. And it's not as if the Avalanche ever underachieved. The Stars had to earn their victories, just like Detroit, just like the Avalanche.
Then it hits you again, with a little more force: we'll probably never see games like those again.
The NHL is following the same salary-cap path of the NFL. And as fans bemoan the loss of the Cowboys-49ers-Packers playoff rivalries, hockey fans will soon be longing for the "good old days" as well.
Maybe it's inevitable, and maybe it's for the best of the league. Competition should be balanced, and teams shouldn't be at the top simply because they have more money. Even more important, every fan should believe his team has a chance to win it all if it puts together the right roster at the right time.
And that's what we have now in the NHL. Tampa Bay and Carolina proved the league's balance by winning the last two Stanley Cups. Anaheim and Buffalo are proving it this year in the regular season. And if you study those rosters, there is plenty to rave about.
But it just doesn't feel the same.
The top four seeds in the West last season lost in the first round of the playoffs.
That's unheard of in any other sport. Anaheim's miracle season this year could fall apart at the hands of a Calgary team that gets good goaltending. The Sabres could crumble at the feet of scrappy Washington. You're just never sure anymore.
A scan of headlines around the league shows some similar storylines. Folks in Toronto are planning a Stanley Cup parade one month and wondering if they'll make the playoffs the next. Fans at Madison Square Garden keep wanting to believe in this incarnation of the New York Rangers but are given reasons to doubt every night. And the good people of Dallas? They're still not sure if Marty Turco is a go-to guy or if Dave Tippett can win in the playoffs.
Maybe we need to simply accept that this is the way it's going to be. This is just like your office league, in which a team can go from first to worst in one year, where every season truly is an adventure.
Maybe this is even better than it used to be. But the photos on the wall at Pepsi Center tell a different story about a different time. And while it wasn't that long ago, it seems like forever.games.
In other NHL action: Carolina 4, Anaheim 2; Pittsburgh 4, Toronto 1; New Jersey 4, Washington 3; Florida 3, Montreal 1; Minnesota 4, Nashville 1; Minnesota 4, Columbus 3, OT; Boston 5, Chicago 3; St. Louis 4, Colorado 2; Calgary 6, LA Kings 4; Ottawa 1, NY Rangers 0.