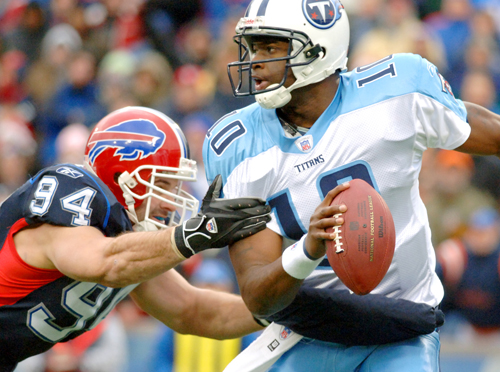 Remember all the questions raised about quarterback Vince Young when he reportedly scored a 6 on the Wonderlic intelligence test at the scouting combine?
They've been answered.
Heading into the final week of the season, the Tennessee Titans (8-7) actually have a shot - albeit a long one - at the playoffs.
If somehow they can pull it off - they need to beat New England and have Cincinnati and Denver lose and Kansas City win for it to happen - they would be the first team in NFL history to make the post-season after starting 0-5.
The catalyst in the turnaround is Young, the third pick in the draft who, despite being quarterback of the national champion Texas Longhorns last season, has been a bit of an underdog.
He lost the Heisman Trophy race to USC's Reggie Bush, took all kinds of heat for his Wonderlic score and wound up getting selected after defensive end Mario Williams and Bush in the NFL draft. He was a forgotten man until six weeks ago, well after Tennessee coach Jeff Fisher inserted him into the lineup in Week 4.
Young lost four of his first six starts and ranked 33rd among the 34 qualifying quarterbacks in passer rating with a 54.8 mark. Even he lost a little confidence in himself as the losses piled up.
"I was wondering if I should have stayed in college because of all the stuff going on," Young said this week. "It was to the point that we were getting our butts whipped and all the stuff that was going on on the sideline. I was, like, 'What is going on? What have I gotten myself into?'"
But then the Titans won, 31-13, on November 19 at Philadelphia and were off and running. They rolled off six straight victories, including consecutive games in which Young brought them back from 14-point deficits, becoming the first rookie quarterback in NFL history to do so.
The highlight was the December 10 game at Houston. Returning to the city where he grew up to face a team that passed him up in the draft to take Williams, he ran 39 yards for the winning touchdown in overtime.
"There was never a doubt in my mind that I wasn't going to be successful in the NFL," Young said. "It was just how long it was going to take and how much I was willing to work."
Young ranks 29th in passer rating but he has rushed for 523 yards and six touchdowns to go along with his 1,972 yards and 12 touchdowns passing the ball. He is the first player in NFL history to have three rushing touchdowns of 20 yards or longer and three touchdown passes of 20 yards or longer in his rookie season.
It appears he has just scratched the surface, and if he's willing to continue working on his throwing motion and understanding the intricacies of the game, he has a chance to be great.
Titans offensive coordinator Norm Chow has done a good job adapting his offense to Young's talents. Just as Mack Brown did with him at Texas, Chow has Young running a lot of bootlegs, sprint-outs and option plays that aren't used a lot in the NFL but are extremely effective for a running quarterback.
Eventually, teams will figure out how to better defend those types of plays, but whether they can overcome Young's phenomenal athletic talents remains to be seen. He isn't as smooth as Michael Vick or as graceful as Cunningham, but it's easy to underestimate his speed and agility.
"I would say he's probably not as fast as Vick," said Patriots coach Bill Belichick. "He doesn't look as fast, but then again he doesn't get run down very often, either. He's kind of deceptive. He has a long stride. He's big. He runs through a lot of tackles."
Just ask the Titans' last six opponents.