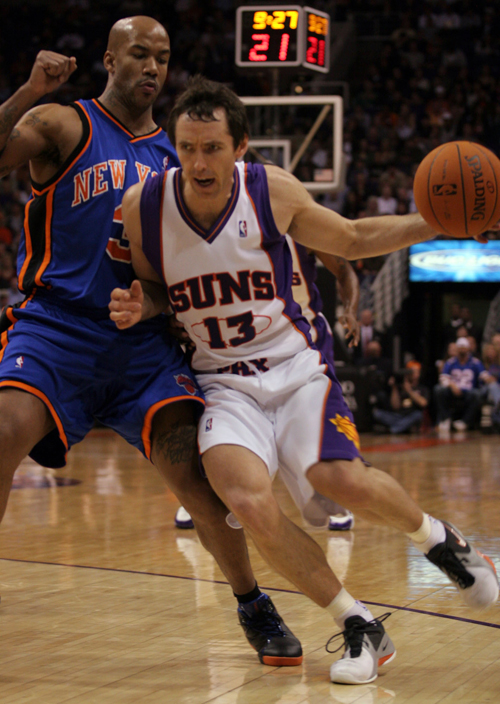 You don't just lose to the Phoenix Suns. You're driving Miss Daisy, while they're Mario Andretti.
You run as if you're wearing clown shoes, while they run in sneakers with wings.
You're the Washington Generals, they're the Harlem Globetrotters.
Unlike the Globetrotters, they do lose once in a while, as they did Thursday in Dallas, but Friday night, Steve Nash and friends took that out on Isiah Thomas' Knicks, 108-86, their 17th victory in the last 19 games.
Or, to quote Thomas' assessment before the game: "They're gooood."
Far too good for a team that was feeling not exactly haughty, but at least proud after Wednesday's triple-overtime victory of survival over the Pistons, the East's best team, plus home-court victories last week vs. Utah and Chicago, three quality Ws in all.
But those were different teams on a different floor. On their floor, the Suns are now 35-4 since Nash arrived.
Which wasn't long after Stephon Marbury departed.
His annual trip back didn't exactly go well Friday: 5-for-17 for 14 points and as many assists as turnovers (four). But he wasn't solely to blame for the Knicks' fourth straight road defeat.
The Knicks' defense surrendered 12-for-26 three-point shooting and couldn't keep the Suns from building a 21-point lead in the first quarter that never dropped below 11 thereafter.
The Knicks' offense also committed 10 turnovers in that quarter to feed the beast that is the Suns' offense and lose any chance of controlling the game's tempo.
Nash, meanwhile, delivered 20 points and nine assists, yet didn't distribute his first dime until the second quarter. But five other Suns scored in double figures, including former Knick Kurt Thomas (12 points, nine rebounds).
"They're like the old San Francisco 49ers, the way they just pick you apart, and they've got players in every area that can do the things that they want done," Thomas said.
He got 21 points from Jamal Crawford and a double-double (19 points, 10 rebounds) from Eddy Curry. But that wasn't nearly enough to successfully christen the Knicks' five-game western trip, which continues Sunday afternoon against the Clippers.
Tempo, of course, is always an issue against the shoot-first, defense-as-an-afterthought Suns and almost 13 months ago, in the same building, the Larry Brown-coached Knicks were able to set it, albeit in an 85-81 loss.
Despite its Curry-centric offense, however, Thomas' team doesn't or can't play as deliberately, instead often getting caught up in trying to outscore its opponent.
Thus, Thomas' pregame fears about tempo proved well-founded when the Suns owned a 21-point lead before the end of the first quarter - during which Nash didn't have an assist, nor Amare Stoudemire a point.
"They do as good a job of any one of enforcing their will and their tempo on the game," Thomas said. "I just hope and pray that we can figure out a way to stay in the game and hang around until the last five minutes of the game, then maybe you can start controlling the tempo with our inside play."
In other NBA action: New Jersey 91, Miami 81; Chicago 107, Toronto 97; Cleveland 109, Milwaukee 99; Washington 112, Orlando 111; New Orleans 99, Denver 89; Minnesota 101, Seattle 82; Indiana 93, Detroit 92; Charlotte 133, LA Lakers 124, 3OT; Houston 94, Atlanta 68; Golden State 110, Boston 100; LA Clippers 102, Sacramento 93; Philadelphia 98, Portland 95.