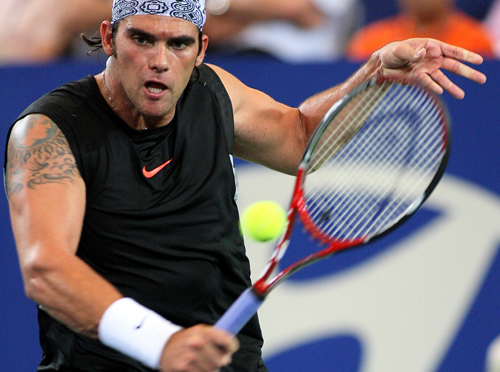 Host nation Australia caused a massive upset on the opening day of the mixed teams Hopman Cup yesterday, beating tournament favorite Russia in their Group A tie.
The Russian pairing of Nadia Petrova and Dmitry Tursunov were odds-on to win the event with local bookmakers, but lost 2-1 to the Australian pairing of Alicia Molik and Mark Philippoussis at Burswood Dome.
Both Molik and Philippoussis are on the comeback trail, Philippoussis after a major form slump and Molik after serious illness. Although both Australians have been in the top 10 during their careers, they find themselves ranked in triple figures entering 2007.
However, they made a mockery of those standings in defeating much higher rated opponents in their singles rubbers to clinch the tie.
Molik, ranked 164th after a middle ear infection that sidelined her for almost two years, upset the sixth-ranked Petrova in three sets, 6-2, 2-6, 6-2.
Philippoussis, ranked 114th, then completed an unlikely win with a straight sets victory over world No. 22 Dmitry Tursunov, 6-4, 7-6 (7-0).
In the dead mixed doubles rubber, the Russians gained some consolation with a 7-6 (8-6), 6-1 win.
Molik has an impressive singles record in the Hopman Cup and claimed another top scalp, despite a second set lapse that saw her drop six successive games.
The 25-year-old served strongly, with 13 aces, and broke the Petrova serve six times from 10 break points.
Molik, who has been ranked as high as eighth in the world and has won six singles titles, moved well around the court in an encouraging start to her season.
She was confident she can climb back into the top 10 and said her court coverage was improving significantly.
"I feel as good as I did before I had my layoff," he said. "There was a couple of balls that I chased down today that I wouldn't have six months ago."
The enigmatic Philippoussis ended his match in style, turning an impending second set loss into an emphatic win.
Tursunov had a set point to level the match on the Philippoussis serve, but the Australian fired down an amazing 203 kilometers per hour second serve ace.
Philippoussis suddenly clicked, holding serve and failing to drop a point in the subsequent tiebreaker as he won the last 10 points of the match.
The 30-year-old was far more willing to serve and volley than in recent times and his famous serve was working throughout, the dual Grand Slam finalist firing down 15 aces.
Philippoussis has been working with Andre Agassi's fitness advisor, Gil Reyes, and coach, fellow Australian Darren Cahill, in Las Vegas and said he was starting to feel the benefits.
"It is nothing to get excited about," he said of the win over Tursunov. "But it is a good match, a good win and a positive start. I have been working on my fitness for the last two and a half months and I feel strong out there."
Under the round robin format of the Hopman Cup, Australia next plays France on Tuesday and on the same day Russia takes on the United States.