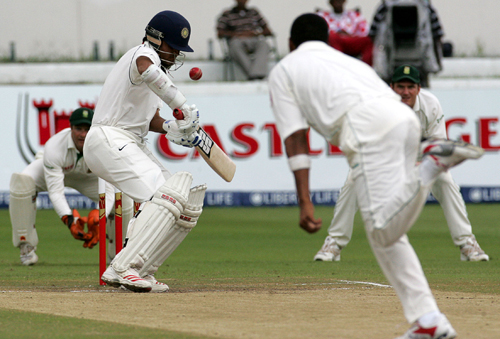 South Africa clinched a series-leveling win as India slumped on the fifth and final day of the second Test at Kingsmead yesterday.
South Africa won by 174 runs after India was bowled out for 179. South African fast bowler Makhaya Ntini took five for 48.
Mahendra Singh Dhoni provided a lone highlight in a poor Indian batting display. He made 47 before he was eighth man out, caught behind in the last over before tea after adding 59 for the eighth wicket with Zaheer Khan.
After only 4.3 overs of play were possible before lunch, the sun came out in the afternoon to give South Africa the opportunity to hit back after losing the first Test in Johannesburg by 123 runs.
There were still some anxious moments for the hosts before victory was sealed, however, as the light started to fade after tea. The umpires looked at their light meters before the last two wickets fell in the space of three balls after tea.
The third and final Test starts in Cape Town Tuesday.
India limped to 47 for four at lunch after Ntini dismissed both overnight batsmen, Sachin Tendulkar and Wasim Jaffer.
India, resuming on 38 for two, lost Tendulkar to the fifth delivery of the day. Ntini produced a virtually unplayable ball that cut back sharply and kept low to trap India's star batsman leg before for nought.
Jaffer followed nine balls later when he played an injudicious pull shot that looped gently to Andre Nel at mid-on. He made 28.
VVS Laxman and Sourav Ganguly kept the South Africans at bay after lunch, putting on 38 for the fifth wicket. Ganguly made 26 but it was an unconvincing innings. Three of his four boundaries were scored off edges before he was out tamely, steering a lifting ball from Ntini to Herschelle Gibbs at gully.
Laxman looked more solid but appeared to misjudge the length of a ball from Andre Nel. Going back deep in his crease he seemed to expect the ball to lift but it shot through at bail height to bowl him.
At that stage India were 85 for six.
Andrew Hall, the fifth bowler to be used, made a breakthrough with his first ball when Kumble fended a lifting ball to Hashim Amla at short leg.