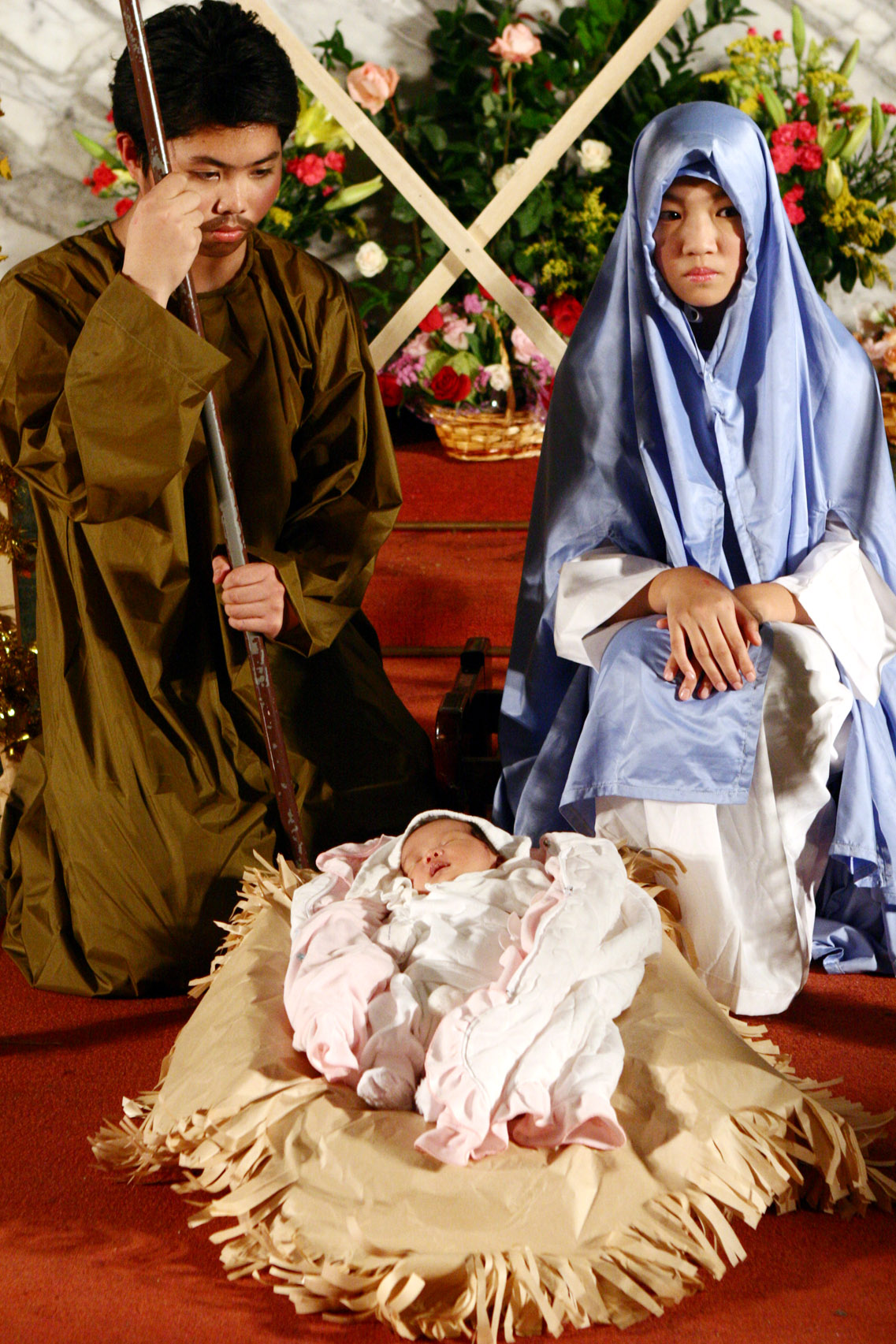 A number of community organizations in Taipei celebrated Christmas and welcomed the New Year by holding their own "noche buenas" (Christmas Eve feasts) at the Taipei Art Park last Sunday.
One of those groups, the Cordillera Organization in Taiwan, organized a picnic featuring traditional dishes such as pinikpikan, dinakdakan and dinuguang manok.
"I assigned officers and members who had some free time to cook those dishes," said group president Cyril Salbino. "It's our gift to our members who have been been very supportive of the Cordillera Organization in Taiwan this past year."
Pinikpikan is similar to the tinolang manok or chicken stew of the lowlanders. Before putting the chicken in a pot of boiling stock flavored with ginger and onions, Cordillerans lightly grill the bird in an open fire. This slightly blackens the fowl's skin, enhancing its flavor.
Another Cordilleran dish, dinakdakan, is grilled pig's head flavored with calamansi and mayonnaise. It is quite similar to the Kapampangans' sisig - grilled pig's cheeks and ears, and chicken liver, smothered with onions, red-hot siling labuyo and calamansi juice.
Dinuguang manok or "chicken chocolate meat" uses the innards of chicken - intestines, gizzard, heart and liver - as its main ingredients. To thicken the soup, chicken's blood is added.
"Nothing is wasted," said Imelda Calabias, treasurer of the Cordillera Organization in Taiwan.
"The only part that we don't eat is the bird's feathers," added Francis Lammawin, founder of the organization.
Temporarily based in Thailand, Lammawin said he only has one wish for his country this Christmas.
"I hope that the Philippines will move forward, and enjoy economic growth. Just look at Thailand, Vietnam and Laos. Their economies are enjoying robust growth," he said.
"What should we do? If we want to change, we have to start with ourselves. Calling for the ouster of government officials and politicians is the wrong approach. Instead of complaining about our country's political and economic state, let's do something constructive. Let's be honest and let's work hard. By doing so, we could have a positive impact on those around us, and in our community."
Francis is confident that the Cordillera Organization in Taiwan will continuously grow under the leadership of Cyril and his dedicated team of officers.
Probably the oldest Filipino association in Taiwan, the COT is comprised of Filipinos from the Cordillera Administrative Region. CAR, one of the most picturesque and enchanting regions in the Philippines (think rice terraces, Sagada caves, and strawberry fields), is composed of six provinces: Mountain Province, Ifugao (land of the famed rice terraces carved from the base of the mountainsides), Benguet (the country's salad bowl), Apayao, Kalinga (white-water rafting capital of the north), and Abra (natural dye capital of the Philippines and home to some of the country's best loom weavers and embroiderers).
"I am optimistic that our group will further grow in 2007 with the help of our founder, Francis Lammawin," Cyril said. "I hope our members will keep on supporting us. Without them, there will be no COT."
The Cordillerans' Christmas party also featured a raffle draw. Prizes were donated by Bing Go, Cosmos, Francis and Connie Lammawin, and MECO. Lutong Pinoy also helped the group organized the event, Imelda said.
"We are very thankful to those people who have made our event a success," she said. "Would you believe that one of our members asked her employer to give her a day off because she wanted to attend our party? It's her first day off in two years."
In addition to COT, Aguman Kapampangan and the Kapulungan ng Samahang Pilipino also held simple Christmas gatherings at the Taipei Art Park last Sunday.
Meanwhile, the Federation of Filipino Communities in Taiwan said it was going full blast with its charity drive for communities devastated by Typhoon Reming. Comprising several local Pinoy groups, the group aims to build at least one classroom or a barangay health center in a town or village battered by Reming. Your donation would be used to purchase building materials from cement and corrugated iron to bricks and lumber. Since this is a long-term program, the federation will also be donating books, computers and school gear (bags, pens, notebooks) to its adopted school in the near future. Those kids need your help, and a fully equipped classroom could just be one of the best aginaldos that they would be getting this Christmas. You may course your donation - in cash or in kind - through an EEC Elite outlet nearest you. EEC will also be shipping the relief goods to the Bicol region for free. For inquiries, call (02) 2596-2889