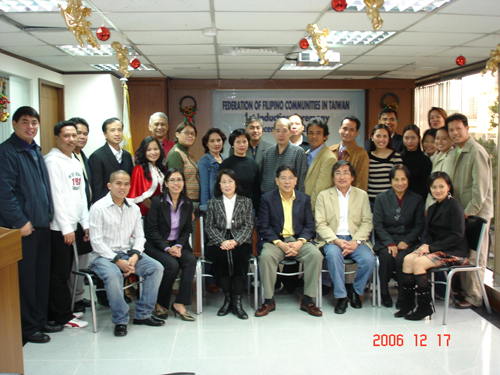 The Federation of Filipino Communities in Taiwan held its induction ceremony at the Manila Economic and Cultural Office in Taipei on December 17. The affair was a quiet and modest one since the group unanimously decided to donate its induction ceremony budget to the victims of Typhoon Reming in the Philippines' Bicol region.
Antonio Basilio, resident representative of the Manila Economic and Cultural Office, facilitated the oathtaking of the elected officers and members of the federation. They are Luz Tsai of the Danshui Filipino Community (secretary general), Lersa Li of the Aguman Kapampangan Group in Taiwan (deputy secretary general), Nene Ho of the Filipinos Married to Taiwanese Association (secretary), Beth Fan of the Bicol Association in Taiwan (treasurer), and Raymond Sandoy of the Pundok Bisaya International (auditor). The latter was represented by Ryan Pendon at the oathtaking.
The board of directors is comprised of Vicky Lin of the Vismin Group, Imelda Calabias of the Cordillera Organization in Taiwan, Ellen Panaligan of the OFW Family Club-Taiwan Chapter, and Ernie Go of the Hsinchuang Filipino Community.
Those who were not able to make it to the induction ceremony were Johnny Sy of the Ilan Filipino Community, Normie Valdez of the Genuine Ilocano Group, Jun Sanchez of Samahang Makata International, Gracelyn Mosquera of the Kapulungan ng Samahang Pilipino, and Mark Rondon of the Tagalog Region Association.
MECO Labor Representative Rey Gopez, MECO Assistance to Nationals Head Carlo Aquino, MECO's Butch Lee, and the Reverends Lito Salvador and Felipe Bacalso of the Fu Jen Catholic University witnessed the induction ceremony.
The federation is a non-profit, non-political and non-sectarian group comprised of the leaders of different Filipino groups and associations in Taiwan. The federation is guided by a constitution that was drafted and approved by all its members.
The federation has already launched a charity drive for communities devastated by Typhoon Reming. In addition to donating relief goods to typhoon survivors, the group also plans to build at least one classroom or a barangay health center in a town or village battered by the violent storm. Donations may be coursed through the EEC Elite outlet nearest you. EEC will also be shipping the relief goods to the Bicol region for free.