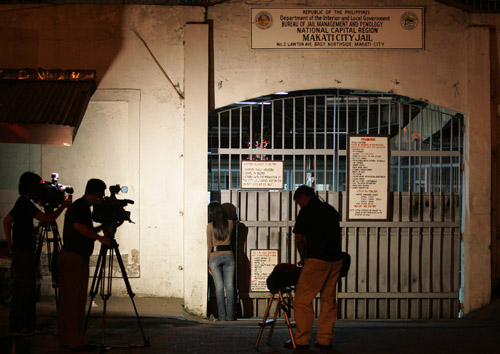 The Philippines has bowed to pressure from Washington over custody of a U.S. Marine convicted of raping a Filipina, transferring him to the American embassy in Manila.
Police and the U.S. embassy spokesman said Lance Corporal Daniel Smith was taken from a local jail late on Friday.
His case has become a headache for the government, which agrees with Washington that under the terms of a Visiting Forces Agreement he should remain in U.S. custody until the end of "legal proceedings" against them.
Arroyo's chief legal counsel Sergio Apostol said the transfer was authorized by the Bureau of Jail Management.
He added it was allowed under the original order of Judge Benjamin Pozon, who sentenced Smith to 40 years in jail on December 4 for the rape of a Filipina last year.
"The decision of Judge Pozon was that the detention of Smith at Makati city jail was temporary and that he can be transferred after an agreement between the Philippines and the United States is reached," Apostol said.
Zosimo Paredes, the executive director of a commission overseeing the VFA, said, however, that the transfer was "irregular." He said that only Pozon's court could order Smith's transfer.
On December 4, a local court sent the 21-year-old to a Manila jail, jeopardizing the Philippines' close security alliance with its former colonial master.
Last week, Washington said it was canceling military exercises with the Philippines next year because of the issue.
"Lance Corporal Smith is now in U.S. military custody and he will remain so until the completion of the judicial proceedings," U.S. embassy spokesman Matthew Lussenhop told GMA 7 television.
He said it was too early to speculate on the prospects of holding military exercises next year following Smith's transfer. Manila is reliant on U.S. military aid and advice to help fight Muslim insurgents and, in addition to the annual war games, has up to 300 U.S. military advisers working with local troops to help them capture militants in the restive south.
The yearly exercises are the centerpiece of a close security alliance and usually involve up to 5,000 U.S. soldiers and around 3,000 Filipino troops over a two-week period.
Smith, who took part in the exercises last year, was found guilty of raping a 23-year-old management accounting graduate in a van in a former U.S. navy base while on shore leave. Three other U.S. Marines were acquitted of rape earlier this month.
Lawyer Evalyn Ursua, counsel of the rape victim given the name Nicole, expressed surprise at the transfer.
Ursua told dzRH radio that the victim's legal team planned to file charges against those behind the transfer, and an impeachment suit against President Gloria Macapagal Arroyo, who she said was the only official who could authorize the transfer.
"This is tantamount to rape of the law and of the Philippine Constitution," she said. "They spirited Smith in the dead of night, commando-style. The guard was not asleep, the guard helped in the escape, and this had the blessings of the president."