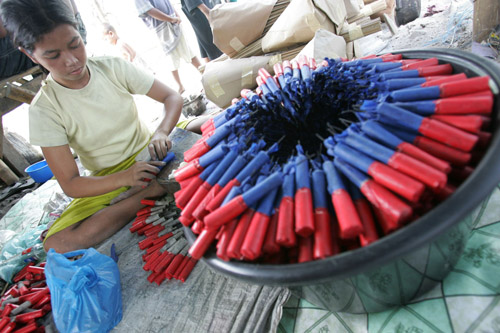 As December draws to a close each year, many slums in the Philippine capital resemble a war zone after dusk, reverberating to the repeated booms of firecrackers which sound like heavy artillery.
The holiday season celebrations sadly come hand in hand with deaths and injuries, many among children. Already this year police in and around Manila have reported 178 injuries from fireworks.
Some of the firecrackers are home-made, cans filled with explosive powder with a crude fuse attached. Many are churned out in small workshops and factories around Manila's suburbs.
Hundreds are maimed each year when the firecrackers burst prematurely.
This year, some of the fireworks on sale have prompted the government to take action.
Police in Manila have banned the sale and use of a bazooka look-a-like called the "Boga," which consists basically of a plastic pipe with a trigger, colored to make it look like the real thing.
Scores have been injured, blinded or deafened by the instruments, many because they peered inside the barrel after pulling the trigger.
"An ounce of prevention is better than a pound of cure," police chief Reynaldo Varilla said while issuing the ban.
Police have ordered the confiscation of the device, but with hundreds of Bogas already sold, few have confidence police will be able to fully implement the order.
Ronald Baranda, who gave up his job as a taxi driver last year to manufacture the device full time, says it is not as dangerous as other fireworks.
"It looks like a real weapon, though different in style with an attached toy gun as a prop," he told Reuters after demonstrating how the device worked. "So it will be fun, clean."
Other vendors also say their wares are not dangerous but that they get a bad press.
"Sales are very bad because of TV news," said Susan Endaya, who has sold firecrackers at the capital's Divisoria market for five years. "There is so much bad news. But what I am selling is not dangerous."
Parents say they are not taking any chances. With little regulation of the industry and lax safety standards, customers say they will not risk starting the New Year with tragedy.
"We want to avoid any accidents. I am scared we will get hurt. Money for food might end up being used to pay for hospital bills," said Net Paruelo, a mother of three.