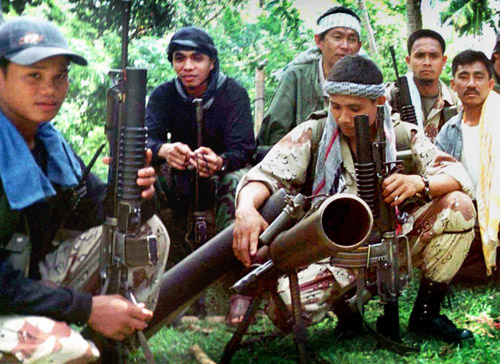 The most wanted man in the Philippines, the head of a group of Islamic militants linked to al-Qaeda, may have been killed in a firefight with troops some months ago, officials said on Thursday.
Troops on the remote southern island of Jolo have found a decomposing body they believe could be of Khaddafy Janjalani, chief of the Abu Sayyaf group, they said. But the body could not be identified and samples have been sent for DNA tests.
"I hope it's Janjalani but there is no official confirmation until such time that the tests are complete," armed forces chief General Hermogenes Esperon told reporters.
"If we get confirmation that it is indeed Janjalani, this is a big point in our fight against terrorism. If not, then the country is assured that our government troops will continue their pursuit operations."
Janjalani, believed to be 31, is on the U.S. Federal Bureau of Investigation's list of most wanted terrorists and has a reward of US$5 million on his capture.
Marine spokesman Lieutenant-Colonel Ariel Caculitan said arrested Abu Sayyaf members led troops to a makeshift grave on Jolo last Wednesday and told them the body in there was Janjalani's. He was killed in a firefight with soldiers in September, they claimed.
"There is still no confirmation if the body indeed is of Janjalani," Caculitan said. "While there is a big possibility that it is him, there is still the element of mistake."
Missionary murder
Janjalani is the younger brother of the Abu Sayyaf's late founder Abdurajak Abubakar Janjalani, who was shot by police on the southwestern island of Basilan in 1998.
The Abu Sayyaf claimed responsibility for the Philippines' worst terror attack in February 2004 when a bomb crippled a ferry near Manila, killing more than 100 people, and for coordinated bombings in Manila and Mindanao in February 2005 that killed 10.
In the late 1990s, the Abu Sayyaf became notorious for a series of high-profile kidnaps and high ransoms paid for the freedom of Western tourists.
Janjalani has been indicted by a U.S. court for the kidnap and killing of American missionary Martin Burnham in 2002, who was abducted along with his wife and held by the Abu Sayyaf for over a year.
But Janjalani, who has named himself after Libyan leader Muammar Gaddafi, is believed to have been leading the Abu Sayyaf back to its Islamic militant roots in recent years.
The group has links to Jemaah Islamiah, which is fighting for a pan-Asian Islamic state, and two Indonesians suspected of carrying out the 2002 Bali bombings are suspected to be also in hiding on Jolo.
Abu Sayyaf leaders have been mostly pinned down on Jolo island in recent months, with about 6,000 soldiers hunting them down. U.S. commando teams are providing intelligence to Philippine troops on the ground.
A U.S. Embassy official said tissue samples from the body had been given to an FBI team on Jolo and it would also conduct DNA tests. There was no word when a result could be expected, the official said.