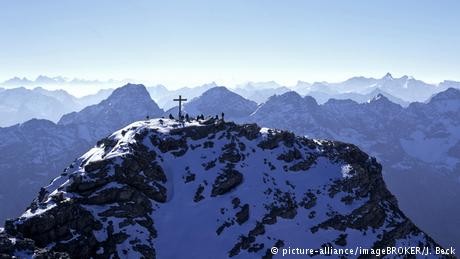 It is one of the most famous mountains in the Allgäu Alps - and could soon be history. According to experts, the summit of the Hochvogel will soon collapse, and according to calculations up to 260,000 cubic metres of rock could fall into the valley. The possible scenario hardly triggers fears among local people: According to the authorities, there is no particular threat to the population.

For years a huge crevice at the summit on the border between Bavaria and Tyrol has been getting bigger and bigger, the first rockfalls have already occurred. Researchers are using sensors to monitor the movement of the massif in order to be able to predict the feared large rockfall.

The crack at the summit is currently 40 metres long, 8 metres deep and 3 metres wide. In the Zugspitze area as well as in two other regions in Austria and Italy, mountain regions threatened by drone flights and measurement technology are also being inspected.

It is unclear whether the Hochvogel summit will actually come to an end with a great deal of noise. "There have been smaller and larger events for years," says Thomas Figl from the Tyrolean State Geological Survey. It is difficult to assess whether the rockfalls will continue step by step or whether the big bang will come.