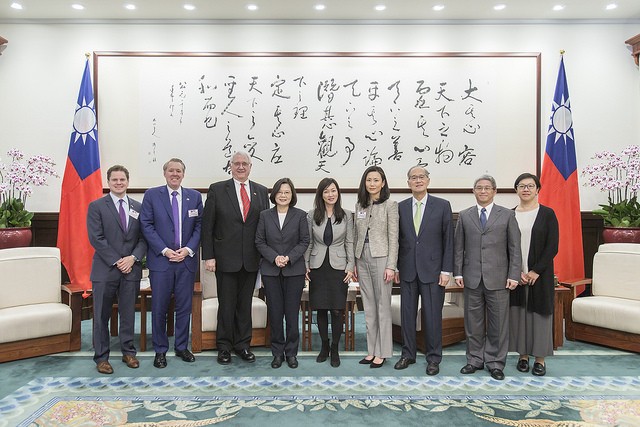 TAIPEI (Taiwan News) — President Tsai Ing-wen (蔡英文) said on Tuesday when disinformation is used to erode democratic systems, nations around the world need to work together to tackle this challenge.

“Because of our commitment to freedom of speech and media, democratic Taiwan is on the frontline of combating disinformation,” said the President, criticizing authoritarian countries for taking advantage of freedom in democracies to divide their societies.

The president met with a delegation representing a U.S. think tank, the Center for Strategic and International Studies (CSIS), at the Presidential Office on Tuesday.

Speaking of the threats of disinformation on social media, President Tsai referred to a report published by the U.S.-China Economic and Security Review Commission of the U.S. Congress last week, which states that Beijing has intensified its political warfare activities in Taiwan over the past year, trying to undermine Taiwan’s democracy and government with disinformation.

The President also mentioned the interview of James Moriarty, chairman of the American Institute in Taiwan, by a local TV news channel in mid-November. Moriarty noted that in the lead up to Taiwan’s local elections scheduled for Nov. 24, external powers have been trying to alter the debate and spread false information, a maneuver he considers “very dangerous.”

“Such non-traditional challenges are far more serious than we have previously imagined,” added the President, calling for like-minded countries around the world to further strength cooperation in defending shared values, including freedom, democracy, human rights, and the rule of law.

Visiting Taiwan after four years, CSIS Chief Executive Officer John Hamre said he was stunned by how many big changes there had been over the past few years.

“Four years ago, it was still the prevailing sentiment that China and the United States, or the West, were on a slow gradual convergence. That's now gone,” noted Hamre.