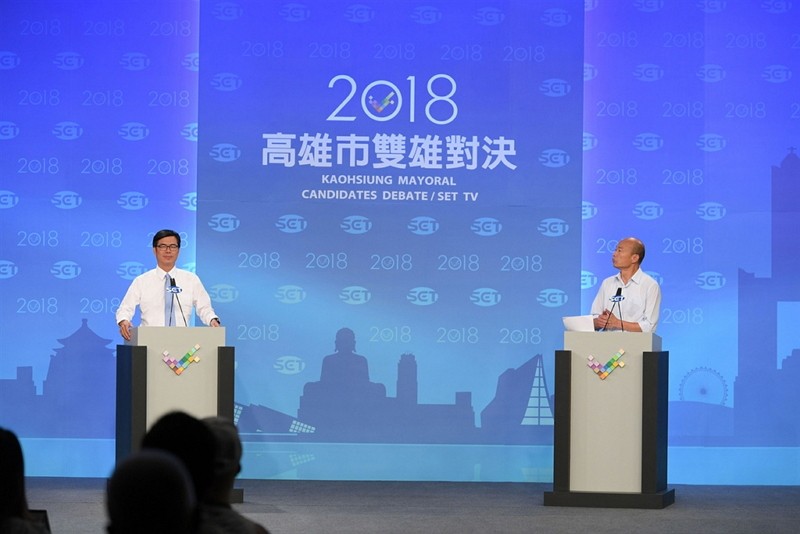 Kaohsiung mayoral candidate Chen Chi-mai (陳其邁) of the Democratic Progressive Party (DPP) and the Kuomintang's (KMT) Han Kuo-yu (韓國瑜) squared off Monday night in their only head-to-head debate ahead of the Nov. 24 election.

The two spent most of the debate trading barbs, with Chen trying to portray Han as an outsider who knows little about Kaohsiung while Han accused Chen of representing a continuation of the DPP's longtime rule in the city that has not dealt with the many problems brought up by Chen in the debate.

The two focused on problems facing Kaohsiung, home to Taiwan's container port and its petrochemical industry, such as industrial transformation, the city's hefty debt, a challenging tourism environment, and people leaving the city to find work elsewhere.

In Chen's opening remarks, he criticized Han and the KMT for using derogatory and foul language to describe Kaohsiung and its former mayor Chen Chu (陳菊) during the campaign, which he said reflected the KMT's long-term disregard for the city.

If elected, Chen Chi-mai said, he would establish a one-stop windows for investors to facilitate clusters for semiconductors and smart industries, promote agricultural products in overseas markets, and expand the MRT network to Lujhu and Linyuan districts to close the gap between urban and rural areas in the city.

In turn, Han distanced himself from KMT Chairman Wu Den-yih (吳敦義), who on Saturday indirectly referred to Chen Chu as "a fat sow" but later apologized for the gaffe, which could have a negative impact on Han's election.

"I hereby reaffirm that anyone who campaigns for me should refrain from abusive words. They should respect Han Kuo-yu," he said.

He reiterated his plan to tap into the oil reserves of Taiping Island in the South China Sea as a way to improve the fiscal position of the Kaohsiung city government.

The race was originally considered a slam dunk for the 54-year-old Chen because Kaohsiung, the largest city in the south, is a traditional DPP stronghold where the KMT has lost every mayoral election since 1998, but this time the race is rated as a toss-up.

Unlike Chen, who has a long resume in politics, including serving five terms as a lawmaker representing Kaohsiung until his recent resignation, Han has largely disappeared from the political scene since his nine-year stint as a lawmaker in now New Taipei from 1993 to 2002.

Over the past few months, the 61-year-old Han has been surprisingly successful at whipping up voter enthusiasm that not only placed Kaohsiung into the national spotlight but raised the profile of other KMT candidates in this year's local elections.

In the portion of the debate when each asked questions of the other, Chen focused on municipal issues, asking Han questions such as what his plans were to transform the city's 16 fishing ports into modern fishing harbors that serve purposes other than fishing.

Chen also asked Han whether he would agree that the tax revenue from plants in the petrochemical industry should be collected by Kaohsiung instead of Taipei where their headquarters are located to address the pollution issue.

Han sidestepped both questions and did not use all of the three-and-a-half minutes allotted for answers.

He said it was "meaningless" to ask him about fishing port transformation. "I am running for Kaohsiung mayor," Han said. "It's like I wouldn't ask you how many fire hydrants there are in Kaohsiung."

Han said he just moved to Kaohsiung a year ago and could not have a full understanding of all municipal issues.

On the second question, Han said he very much valued the development of not only the petrochemical industry, but also fishing and agricultural sectors. His being unfamiliar with all of the details "doesn't mean I don't care about them," Han said.

In one of the questions Han posed to Chen, he questioned whether Chen would be able to revive the tourism industry, suggesting that the DPP's policy toward China was responsible for the fall in Chinese visitors to the city after the DPP came into power in 2016.

The debate held from 8 p.m. to 10 p.m. Monday night was broadcast live on Sanlih E-Television and the Public Television Service.

Independents Chu Mei-feng (璩美鳳) and Su Ying-kuei (蘇盈貴) are also vying for Kaohsiung mayor but did not participate in the debate because they were not invited.