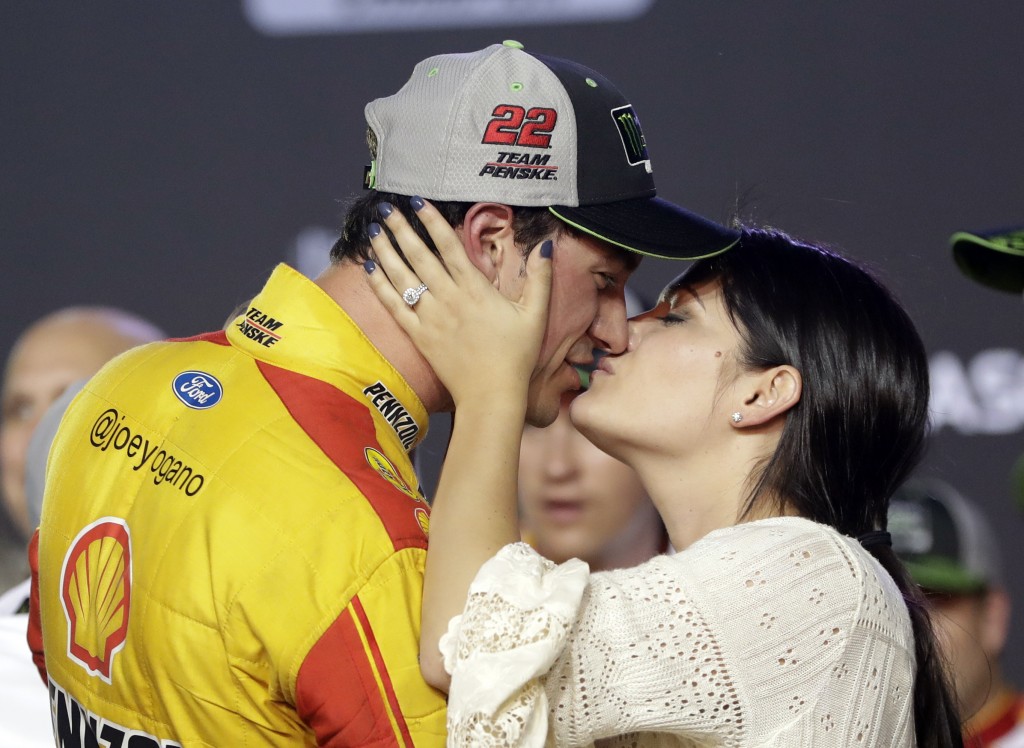 HOMESTEAD, Fla. (AP) — Joey Logano was the underdog in NASCAR's title race, the driver few thought capable of keeping pace with the Big Three and stealing the title from one of the favorites.

Logano proved everyone wrong with an upset victory in a season in which he only became a true contender once his Team Penske group started the postseason. He blazed his way through the playoffs and closed out his improbable run Sunday with a win at Homestead-Miami Speedway that seized his first NASCAR title.

"It's been so hard and such a long road to get here and been so close and had that feeling of defeat, and man, it stings," Logano said. "But I felt so confident going into this week that we were the car to beat. My race team, I wasn't worried about them at all, and I knew I just had to do my job and everyone was going to do their job and everything was going to be fine."

He won the title with two victories and eight top-10 finishes in the postseason. At Homestead, where it was winner-take-all, Logano led a race-high 80 laps but needed a late caution for one final shot to win the race. It came when teammate Brad Keselowski spun Busch teammate Daniel Suarez for a race-changing caution.

Logano was fourth on the restart with 15 laps remaining but powered his way alongside leader Truex, used a strong move in the outside lane three laps later to take over the top spot. Logano pulled away from there and won for Penske.

"We were the favorite. We executed down the stretch like nobody's business," Logano said. "I knew we had a short-run car. I said it before the race started that if it was anything longer than 25 laps we were going to be in trouble. That showed all day. But it came down to the short run and we are champions. NASCAR champions."

Logano won the title in his 10th season at NASCAR's top level and is the first driver from Connecticut to win a championship.

Logano capped a banner year for Roger Penske, who also was elected into the NASCAR Hall of Fame, won the Indianapolis 500 for a record 17th time and celebrated Team Penske's 500th victory.

Team Penske also has been the cornerstone for Ford the last six seasons, and Logano gave the manufacturer its first Cup title since 2004.

Here are some other items of note from Sunday's championship race:

Truex said goodbye to his championship hopes and farewell to Furniture Row Racing.

Truex fell just shy of winning his second straight NASCAR championship in the final race for Colorado-based FRR. Furniture Row shuttered its doors after a 14-year run in which it morphed from an underfunded backmarker to NASCAR champion with Truex behind the wheel.

Truex was in prime position to repeat until a late caution ruined the night and left him wondering what might have been.

"No question we had the car to beat," Truex said. "But if you don't lead the last lap, it doesn't matter what you got. We fought hard. We played the right strategy. We were off a little in the daytime, just like last year. We kept getting it better and better and better. On the long run, man, the thing was nasty. We killed them. That was cool, but it didn't come down to that tonight."

Once 5-hour Energy pulled out of NASCAR and no other sponsorship could be secured, owner Barney Visser pulled the plug on the organization.

Truex wanted to deliver the ultimate parting gift for FRR.

ONE FOR THE ROAD

Jimmie Johnson hugged it out with crew chief Chad Knaus and toasted with beers to the end of their 17-year professional relationship. Johnson and Knaus are parting ways after seven NASCAR championships.

They couldn't grasp greatness one final time, finishing 14th in the finale and going winless in a season for the first time in his Cup career.

"He is my brother, there is just no way around it," Johnson said.

Johnson hasn't won since Dover in 2017, an unthinkable string of 59 straight losses.

"I've had such a fortunate career and I would have loved to keep that streak alive," Johnson said.

Busch and Harvick combined to win 16 races, lead nearly 3,500 laps and each were considered a heavy favorite to win a second NASCAR championship. They got a big 0 in the win column when they needed it most.

Harvick, dominant in the No. 4 Ford all year, lagged on the speed charts all weekend. The Joe Gibbs Racing' pit crew flubbed two stops for Busch — the blunders cost him six and four spots off pit road — that denied one of NASCAR's biggest career winners a second title.

"You can always have stops where things don't go your way," Gibbs said. "That's part of life."