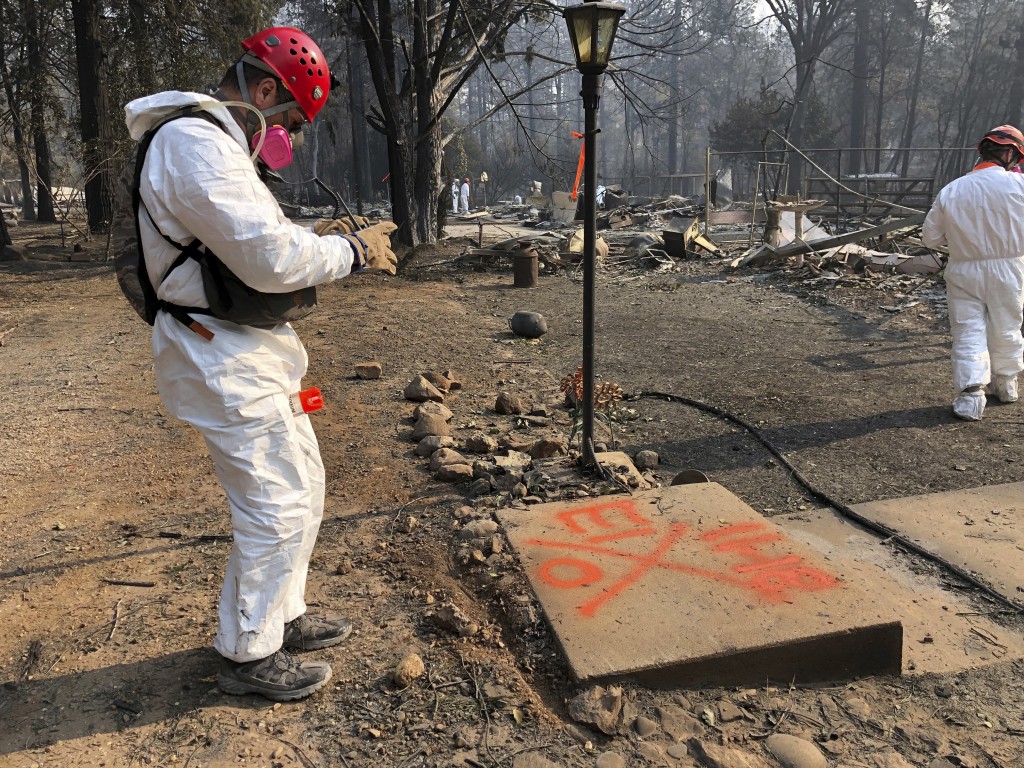 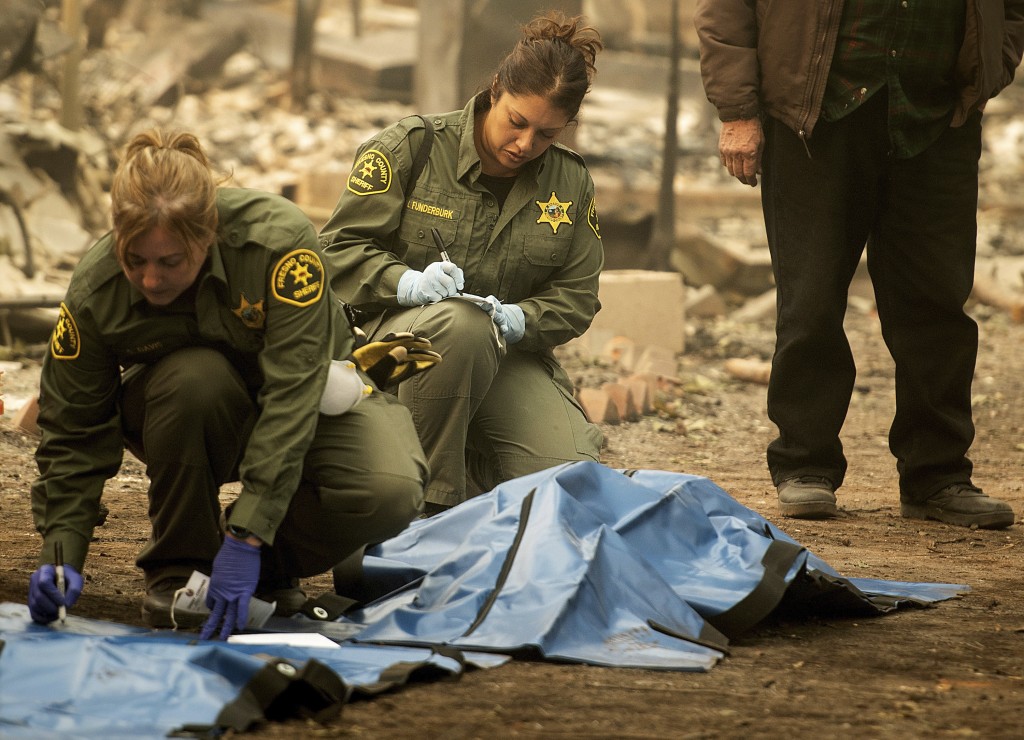 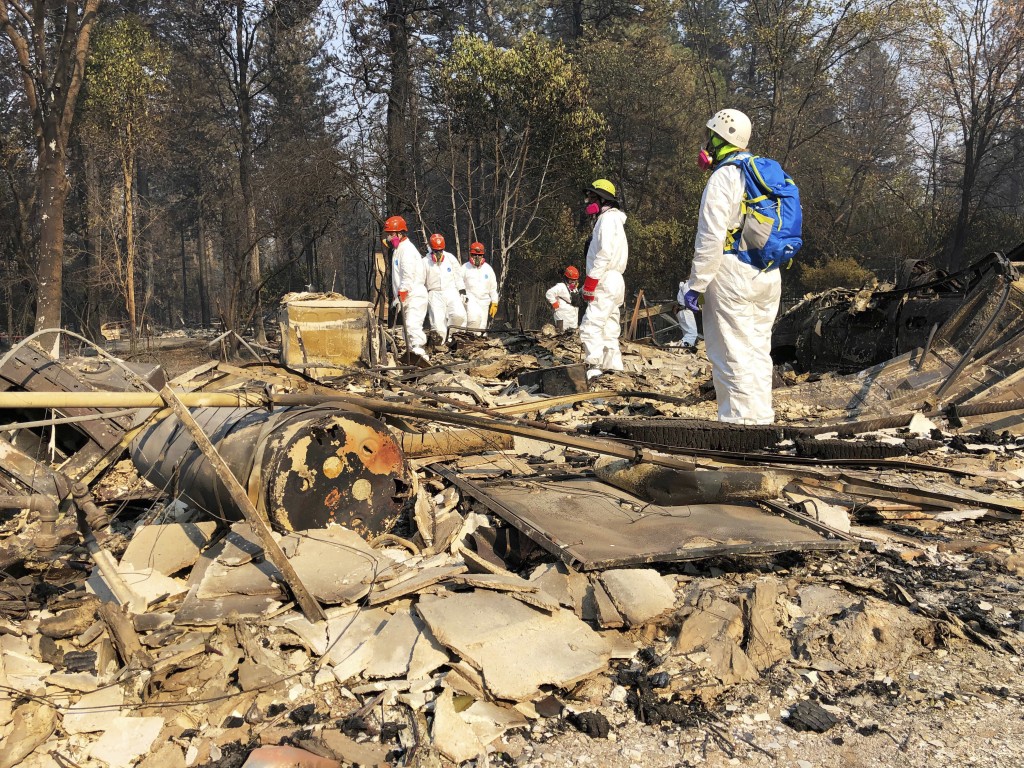 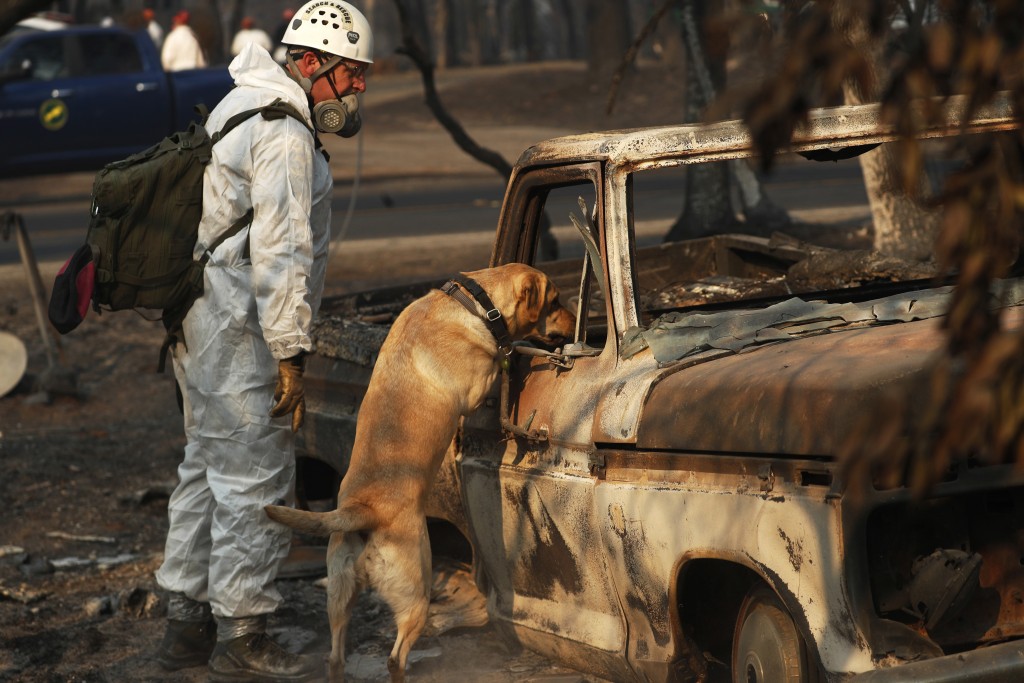 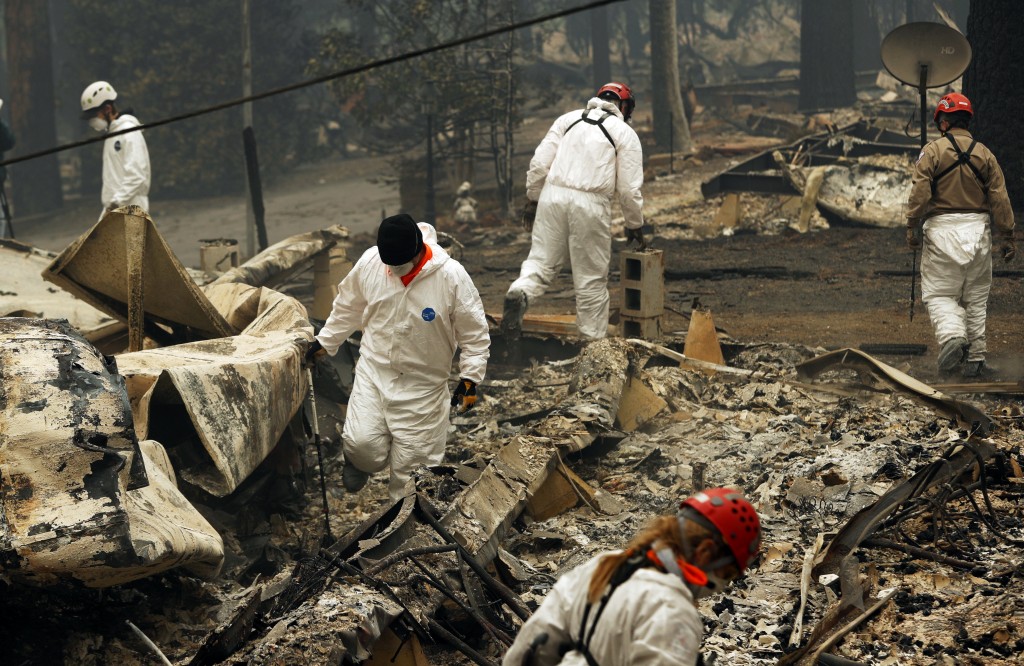 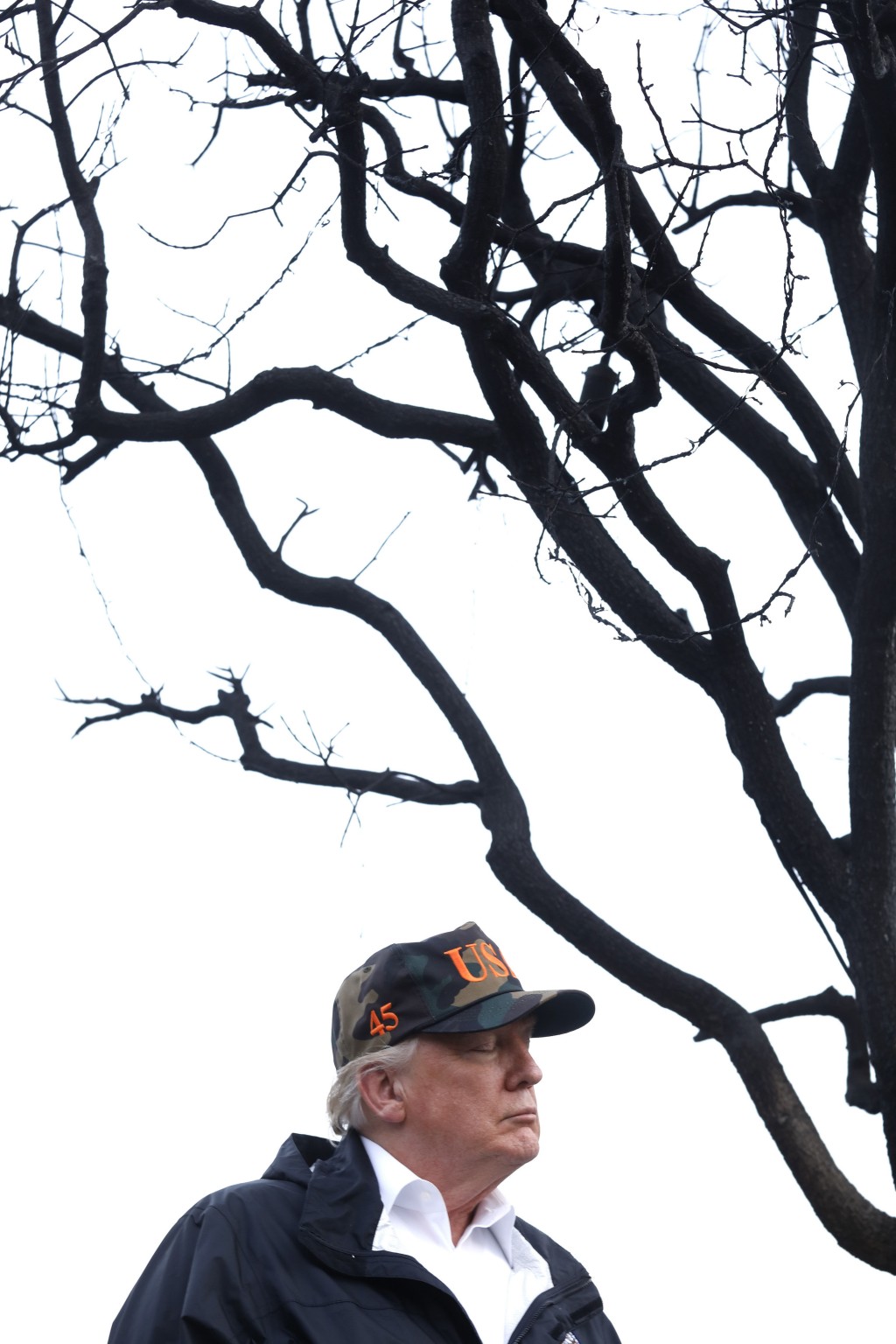 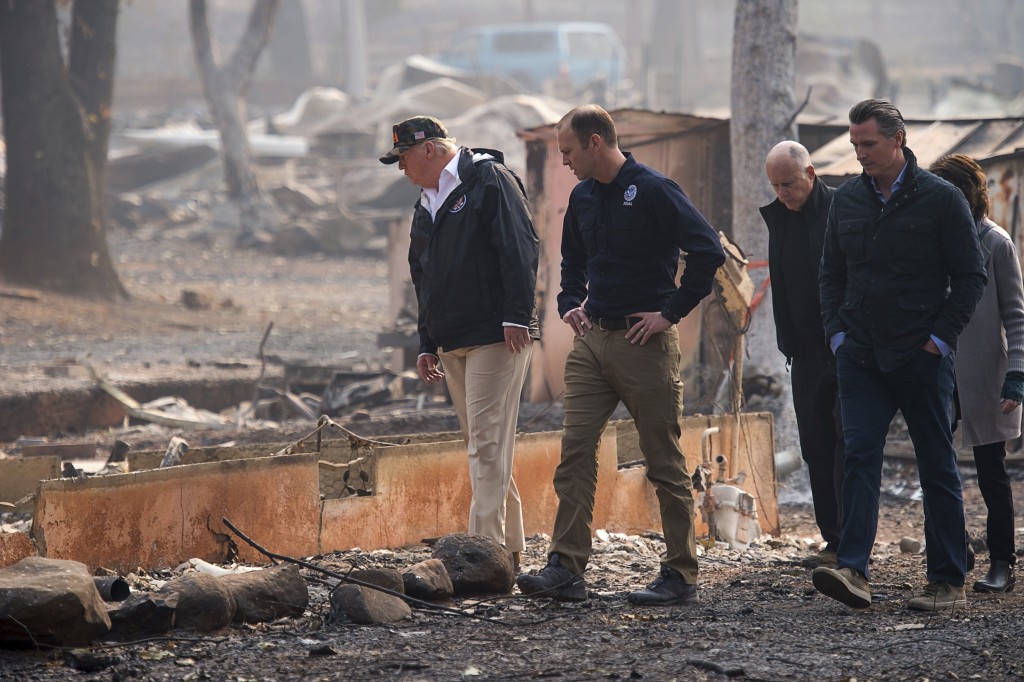 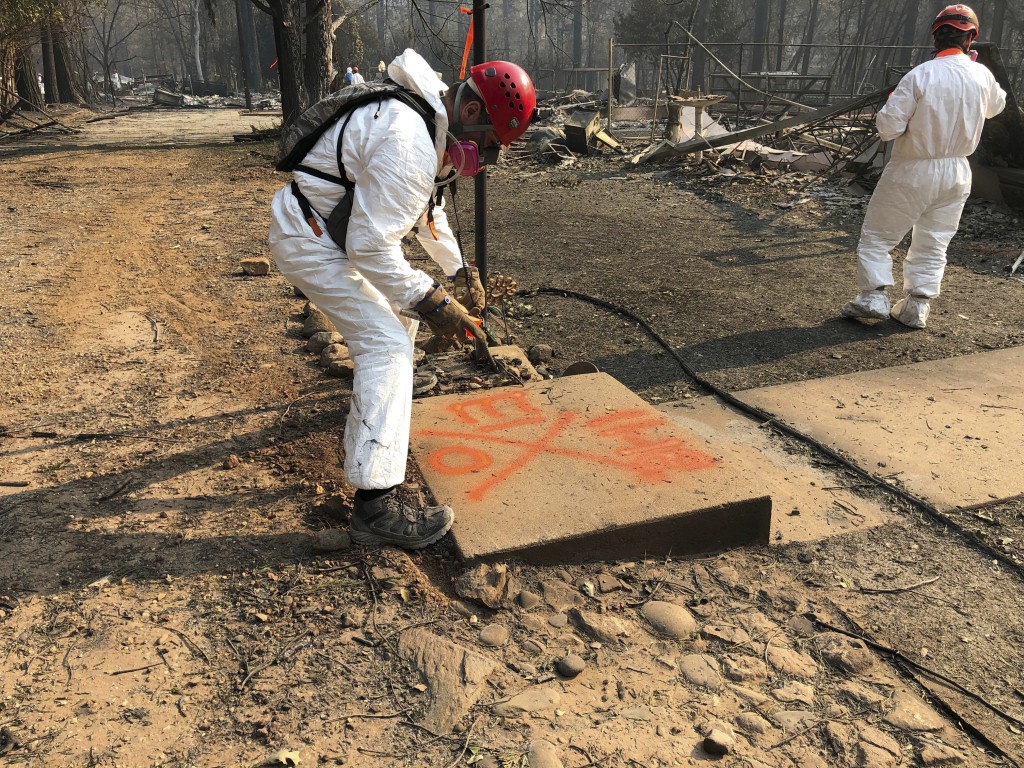 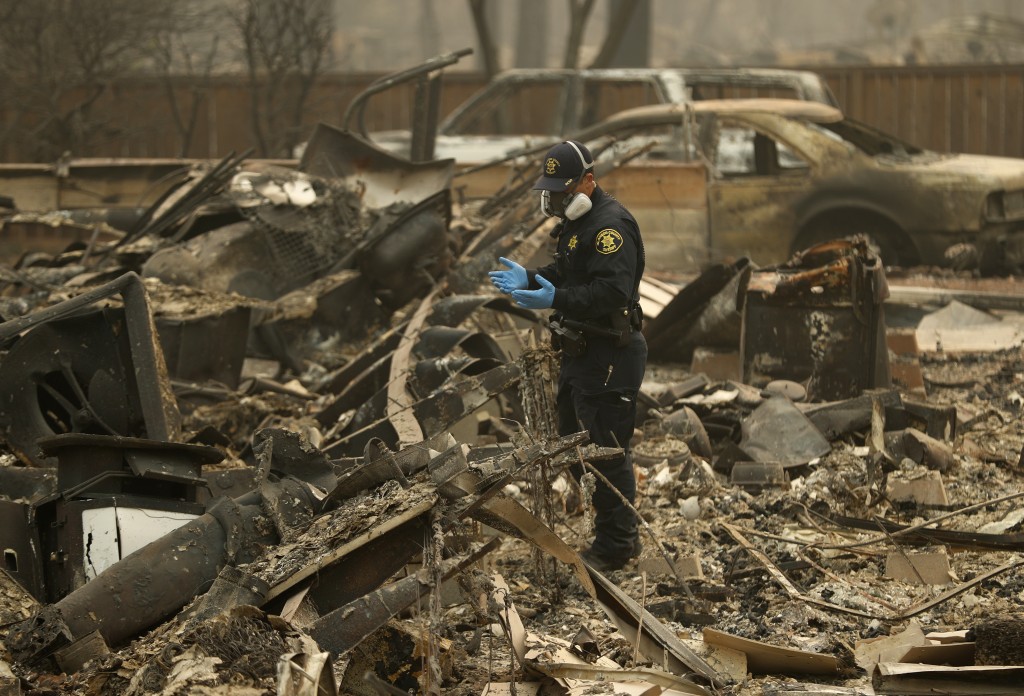 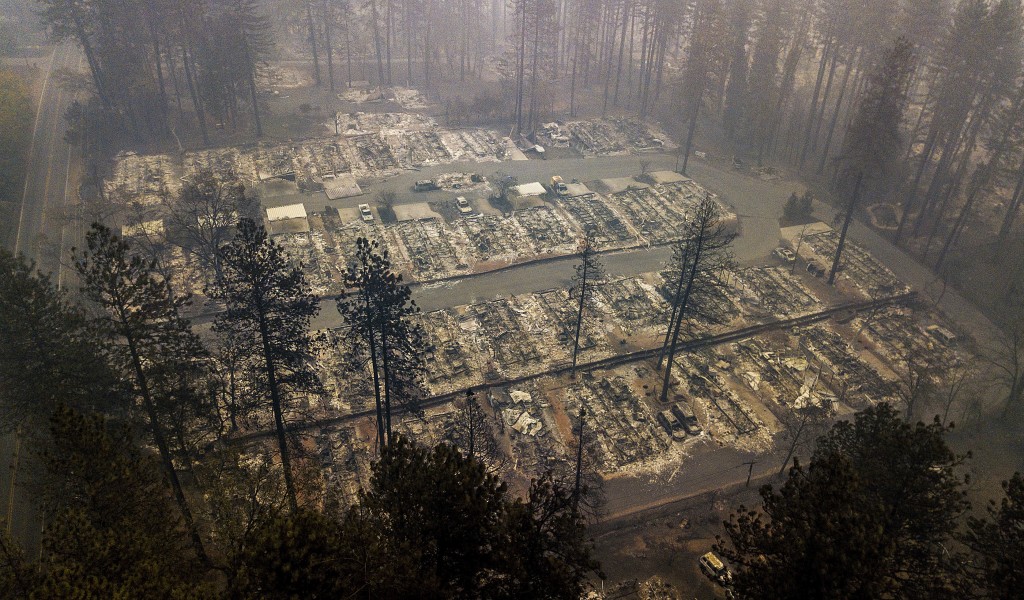 PARADISE, Calif. (AP) — The search for remains of victims of the devastating Northern California wildfire has taken on new urgency as rain in the forecast could complicate those efforts while also bringing relief to firefighters on the front lines.

Up to 400 people fanned out Sunday to search the ash and rubble where homes once stood before flames roared through the Sierra foothills town of Paradise and surrounding communities, killing at least 77 people in the deadliest U.S. wildfire in a century.

Wearing white coveralls, hard hats and masks, teams of volunteers and search and rescue crews poked through the smoky debris for fragments of bone before rains can wash them away or turn loose, dry ash into a thick paste. The so-called Camp Fire has destroyed more than 10,500 homes.

A team of 10 volunteers, accompanied by a cadaver dog, went from house to house in the charred landscape. They scrutinized the rubble in five-minute sweeps, using sticks to move aside debris and focused on vehicles, bathtubs and what was left of mattresses.

When no remains were found, they spray-painted a large, orange "0'' near the house and moved on.

Robert Panak, a volunteer on a team from Napa County, said he tried to picture the house before it burned and think where people might have hidden. His morning search was fruitless, but he wasn't deterred.

"I just think about the positives, bringing relief to the families, closure," Panak said.

Sheriff Kory Honea said it was within the "realm of possibility" that officials would never know the exact death toll from the blaze. He also questioned whether the search for remains could be completed by midweek when rain is forecast.

"As much as I wish that we could get through all of this before the rains come, I don't know if that's possible," Honea said.

About 1,000 names remain on a list of people unaccounted for more than a week after the fire began in Butte County about 140 miles (225 kilometers) north of San Francisco, authorities said.

Authorities don't believe all those on the list are missing and the roster dropped by 300 on Sunday as more people were located or got in touch to say they weren't missing.

On Sunday afternoon, more than 50 people gathered at a memorial for the victims at First Christian Church in Chico, where a banner on the altar read, "We will rise from the ashes."

People hugged and shed tears as Pastor Jesse Kearns recited a prayer for first firefighters, rescuers and search teams: "We ask for continued strength as they are growing weary right now."

Paul Stavish, who retired three months ago from a Silicon Valley computer job and moved to Paradise, placed a battery-powered votive candle on the altar as a woman played piano and sang "Amazing Grace."

Stavish, his wife and three dogs managed to escape the fire, but the house is gone. He said he was thinking of the dead and also mourning the warm, tight-knit community.

"This is not just a few houses getting burned," he said. "The whole town is gone."

Hundreds of search and recovery personnel are involved in the effort, going to homes where they received tips that someone might have died.

But they are also doing a more comprehensive, "door-to-door" and "car-to-car" search of areas, said Joe Moses, a commander with the Monterey County Sheriff's Office, who is helping oversee the search and rescue effort.

The search area is huge, Moses said, with many structures that need to be checked.

The fire also burned many places to the ground, creating a landscape unique to many search-and- rescue personnel, he said.

"Here we're looking for very small parts and pieces, and so we have to be very diligent and systematic in how we do your searches," he said Friday.

The death count only grew by one Sunday and firefighters managed to expand containment to 65 percent of the 234 square mile (606 sq. kilometers) burn zone.

Rain was forecast for midweek in the Paradise area. The National Weather Service said the area could get 20 mph (32 kph) sustained winds and 40 mph (64 kph) gusts, which could make it hard for crews to keep making progress against the blaze.