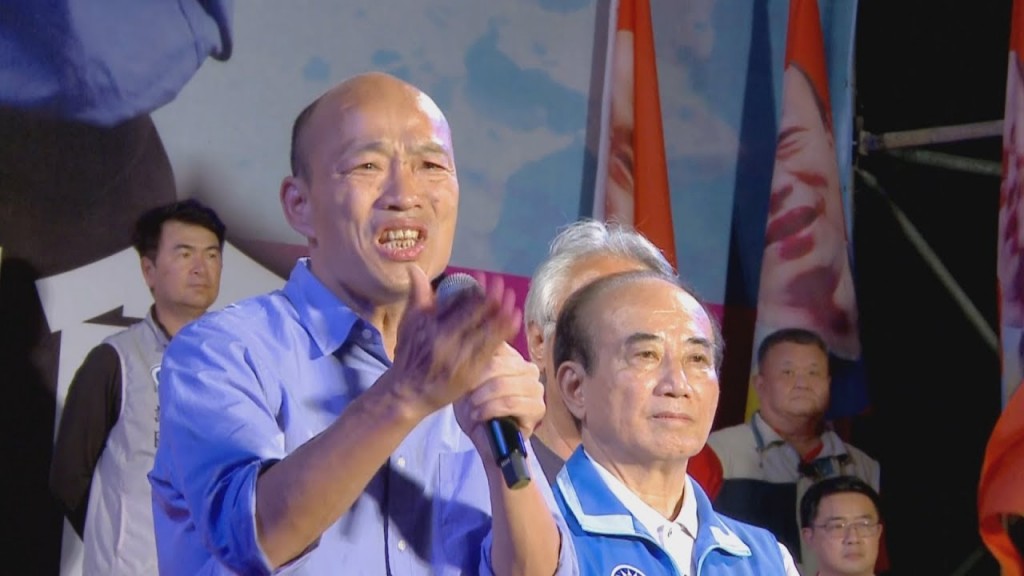 KAOHSIUNG (Taiwan News) -- Two years ago, the idea that the KMT could take control of Kaohsiung City Council was inconceivable. Even two months ago, the idea seemed fanciful at best.

But this week, according to a poll carried out for United Daily News, which admittedly tends to back the KMT, their candidate to be the new Mayor of Kaohsiung, Han Kuo-yu (韓國瑜), holds a 17 percentage point over his DPP rival Chen Chi-mai（陳其邁）.

So, what on earth has happened? It has been a seismic couple of months in Kaohsiung politics and there is an awful lot to unpack. If you had to try and explain the rise of Han Kuo-yu in just one sentence, the easiest way would be to draw a comparison with the rise of various populist politicians around the world.

In the same way that Donald Trump won the U.S. Presidency and Jair Bolsonaro surged to victory in the recent Brazilian elections, Han Kuo-yu has employed a combination of strong rhetoric, hollow and uncosted policy pledges, and fake news.

He has also cultivated the impression that he is a regular man-on-the-street rather than a career politician to try and persuade people that he offers a genuine chance for change. However, when you scratch below the surface, little of what Han Kuo-yu says stands up to scrutiny.

The myth of Han as a political outsider

Han has tried to position himself as being something different from the usual breed of politicians. He has portrayed himself as an outsider in the same way that Ko Wen-je (柯文哲) did so successfully in Taipei in 2014.

If you believe Han’s election literature, he is a man who comes from the world of business, a CEO candidate, who will bring this acumen into Kaohsiung City Hall to sweep away the establishment and help make everyone in the city more wealthy.

The truth is very different. Han Kuo-yu is a career politician who was a KMT member of the Legislative Yuan between 1993 and 2002, who also served as KMT caucus leader for a spell.

What is more, his time in office was beset with scandal. In May 1993, after future-President Chen Shui-bian (陳水扁) said something in parliament that Han didn’t like, he strode up to him, flipped over a table, and punched Chen in the face, hospitalizing him for three days.

Han also had controversial links to Xu Tian-de (許天德), a notorious gangster and leader of the Tiandao League (天道盟). After a rival of Xu was shot in Taipei, Han arrived at a police station with the person he claimed was responsible.

However, the following year, Xu Tian-de was arrested carrying a sub-machine gun and the subsequent investigation found that he was the man responsible for the earlier shooting. Han has been asked about this incident during the Kaohsiung campaign and has yet to offer any form of satisfactory explanation.

After leaving that position at the behest of the incoming Tsai administration in 2016, Han then ran to be Chairman of the KMT, finishing a lowly fourth with just 5 percent of the vote.

Han has never been the CEO of a private company in his life. He has been a politician or public sector worker for twenty-five years and is as much a part of the establishment as any other Kaohsiung candidate. He also has no obvious connections with Kaohsiung having spent his entire life living in Taipei and Yunlin.

So why have so many people in Kaohsiung seemingly embraced him?

Han’s policies, if we can call them that, have been focused solely around the idea that he can make the people of Kaohsiung more wealthy. Needless to say, this is music to the ears of many in a city which is still struggling to shake off its heavy-industrial heritage, where wages are low, and a high proportion of people working in the public sector have been hit hard by the Tsai administration’s recent pension reforms.

But quite how he plans to bring wealth and prosperity to Kaohsiung is still unclear.

Han has proposed a start-up fund for young people to create new businesses in the city. But he has not explained where the money for this will come from, how much money will be made available, whether it will be grants or loans, or what kinds of business ideas will be eligible.

Will a new business need to create a certain number of new jobs to receive funding? Will they need to be operating in specific sectors? Or, as some people suspect, will anyone be able to rock up at Kaohsiung City Hall, say they want to open a bubble tea shop, and walk away with a chunk of public money in their pocket? Han and his team have offered no detail whatsoever.

One of his most bizarre proposals is to start drilling for oil around Taiping Island. This area in the South China Sea has significant oil reserves, but they are also hugely strategically sensitive, with Communist China, the Philippines, and Vietnam all also laying claim to them.

Even if Han as Mayor had the authority to order drilling there, which is highly debatable, the diplomatic furor that would follow such a move would undoubtedly cause more harm to the Taiwanese economy than any benefits striking oil might bring. He is also completely overlooking the environmental impact such a move would have.

Another idea is to open casinos on Qijin (旗津), the island in Kaohsiung harbor which is currently home to some of the city’s best preserved cultural attractions and traditional communities as well as being a center for the city’s shipbuilding, steelwork, and oil refinery industries. Han has offered no explanation of the impact such a move could have on the area or assessed whether such a move would be legal given Taiwan’s ban on the construction of casinos on the mainland.

These are just three examples of policies which sound like they have been plucked out of thin air and, given the absence of any detail, probably have been. Much like Donald Trump proposing a logistically impossible and prohibitively expensive wall along the border with Mexico, Han appears to be trying to say what he thinks will be popular, with absolutely no concept of whether his ideas are deliverable or not.

But it doesn't seem to matter because his ideas are being lapped up by the electorate in Kaohsiung, many of whom argue that regardless of whether you agree with Han’s suggestions, he is a politician who will do something different. It is a dangerous stance to take.

Much of the reporting of the Han Kuo-yu campaign seems to imply that his popularity is largely among young people.

But in fact, when you ask around, most young people can see through his façade. Some don’t care and will vote for him anyway. Many more will not, although there is no guarantee they will support DPP candidate Chen Chi-mai instead.

If Han does claim victory in Kaohsiung, it is likely to be the elderly residents of Kaohsiung that put him there. Driving around the city, it is in the non-gentrified, poorer areas of the city where Han’s posters and flags are most prevalent. These are the areas populated mostly by elderly people.

What is the appeal of Han to this demographic? There are a few things.

The elderly population is likely to be less educated and therefore more easily convinced by Han’s empty rhetoric and hollow promises.

They are also extremely active on LINE, Facebook, and other social media platforms and so much more vulnerable to the plague of "fake news" that has swept Taiwan during this election campaign.

There are countless examples of how this has impacted the Kaohsiung Mayoral race. After the recent televised debate between the Mayoral candidates, a story claiming that DPP candidate Chen Chi-mai had been fed answers through an earpiece went viral.

There was no evidence to support this claim and indeed watching Chen’s rather flat and uninspiring performance in the debate, it is hard to imagine he could possibly have been prompted. The independent Kaohsiung City Election Committee has examined video evidence and dismissed the claim. But the idea has already taken hold and many people in Kaohsiung now believe it.

Another false story claimed that DPP legislator Chiu Yi-ying had to plead with the crowd "don’t leave" at one of Chen’s campaign rallies. In actual fact, what Chiu did was thank the crowd for staying so late at the rally.

While there is no specific story which has swung public opinion away from the DPP and towards Han, the steady stream of false stories, lies, and misleading propaganda has had a cumulative effect. And when these stories pop up on their LINE feed, it is the elderly and uneducated people, those unable to critically analyze information, who are incapable of determining the validity what they are reading.

These people have been hit in the pocketbook by the decision to retrospectively cut their pensions. Some have lost as much as 40 percent of their income. They are extremely angry about this and many are out for revenge.

Speaking to these people, time and again, you hear them saying that they have to vote KMT to teach the DPP a lesson. Some believe the KMT will restore their pensions. Other’s don’t. But for them, this election is not about either Han Kuo-yu or Chen Chi-mai. It is about punishing the Tsai administration for depriving them of their money.

Lessons for the DPP

So, what can the DPP do about the rise of Han at this stage of the campaign? The honest answer is not a great deal.

It was always going to be difficult for them to find a candidate to step into the shoes of the charismatic Chen Chu, who was such a popular Mayor. But in Chen Chi-mai, they have chosen the very antithesis of her. He is lacking in charisma, offering little change in policy direction, and for many people totally uninspiring.

In the recent Kaohsiung mayoral debate, Han made a number of errors which Chen was unable to capitalize on. The general consensus was that Chen won the debate, but his insipid performance looked bland and tepid when put alongside Han’s impassioned campaign rallies.

The United Daily News poll, which gave Han a 17 percentage-point lead, looks to be exaggerated. His recent gaffs have damaged his standing even with his elderly core vote, as has closer scrutiny of his career to date. But this election looks certain to be a close competition and whoever wins in Kaohsiung is unlikely to win by a large margin.

If Han does emerge victorious, then Kaohsiung can look forward to an unpredictable roller-coaster ride through the next four years. Any policies he might try to implement is anybody’s guess at this point. How much damage he could cause in a single term is also, as yet, unclear.

If Chen does manage to scrape through, Kaohsiung will continue to tick along as it has for the past twenty years, developing slowly but surely. But his success will be a hollow one, scraping home in an election he should have walked easily through.

However, it will still be vital that the DPP takes the rise of Han Kuo-yu as a warning and learns from it. Because if they can’t change the narrative around the party, and in particular the Tsai administration, their ability to secure a second-term for Tsai as President and retain their majority in the Legislative Yuan in 2020 will become increasingly difficult.