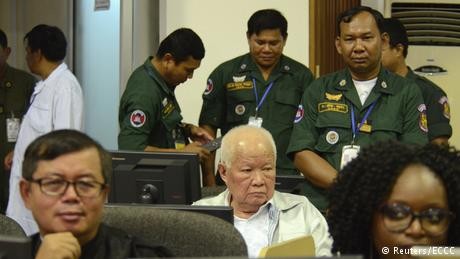 In a historic ruling, two former leaders of the Khmer Rouge regime have been found guilty of genocide by a United Nations-backed war crimes court in Cambodia.

"The chamber ... finds that the crimes of genocide ... were committed" against ethnic Vietnamese and Cham Muslims, presiding judge Nil Nonn said. It's the first time the long-running tribunal has issued such a ruling.

Nuon Chea, 92, and Khieu Samphan, 87, (top picture, C.) are the last surviving senior leaders of Pol Pot's bloody regime, and are already in jail serving life sentences for forced transfers and disappearances of masses of people.

The tribunal on Friday also found them guilty of crimes against humanity and other breaches of the Geneva Conventions, sentencing them once more to life imprisonment.

Khieu Samphan was found guilty only of genocide against the Vietnamese and not against the Chams, for lack of evidence.

More than 1.7 million Cambodians, almost a quarter of the population, were murdered between 1975 and 1979, as Pol Pot, known as "Brother Number 1," attempted to forcibly transform the nation into a socialist agrarian republic.

The UN tribunal, officially called the Extraordinary Chambers in the Courts of Cambodia, was established in 1997, but has been hindered by the deteriorating health of defendants and political interference.

The court has convicted just three people, and many believe Friday's verdict might be the tribunal's last, with Prime Minister Hun Sen — himself a former Khmer Rouge member — claiming that further investigations could threaten stability in the country.

Pol Pot died at the age of 72 in 1998 while under house arrest, before he could be turned over to an international tribunal. Some claim he committed suicide using prescribed medications.