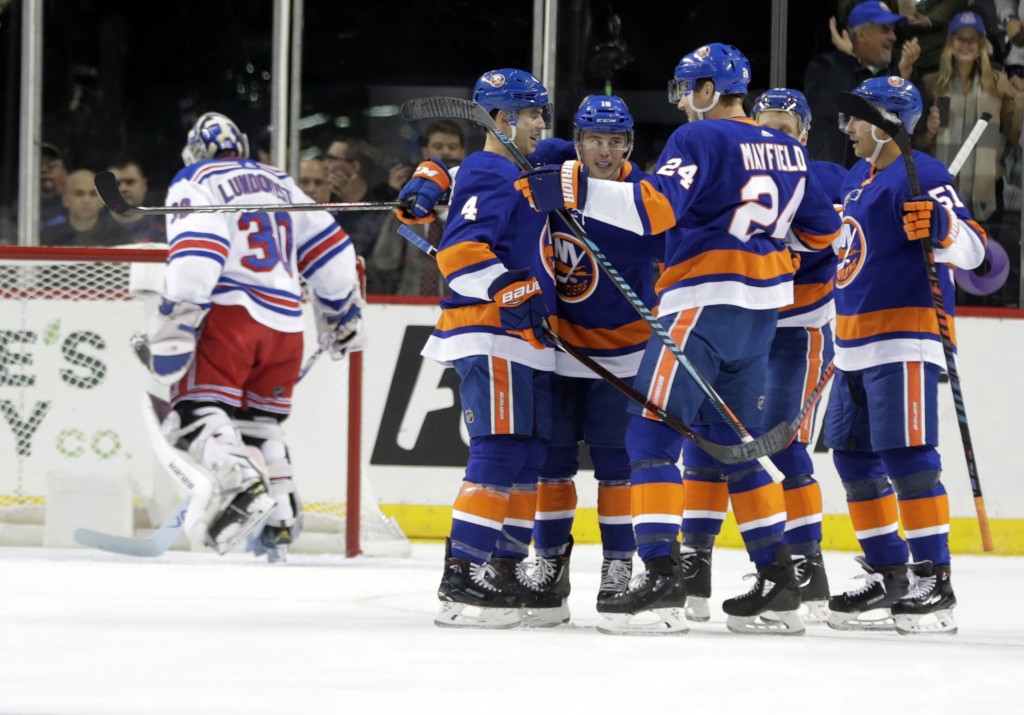 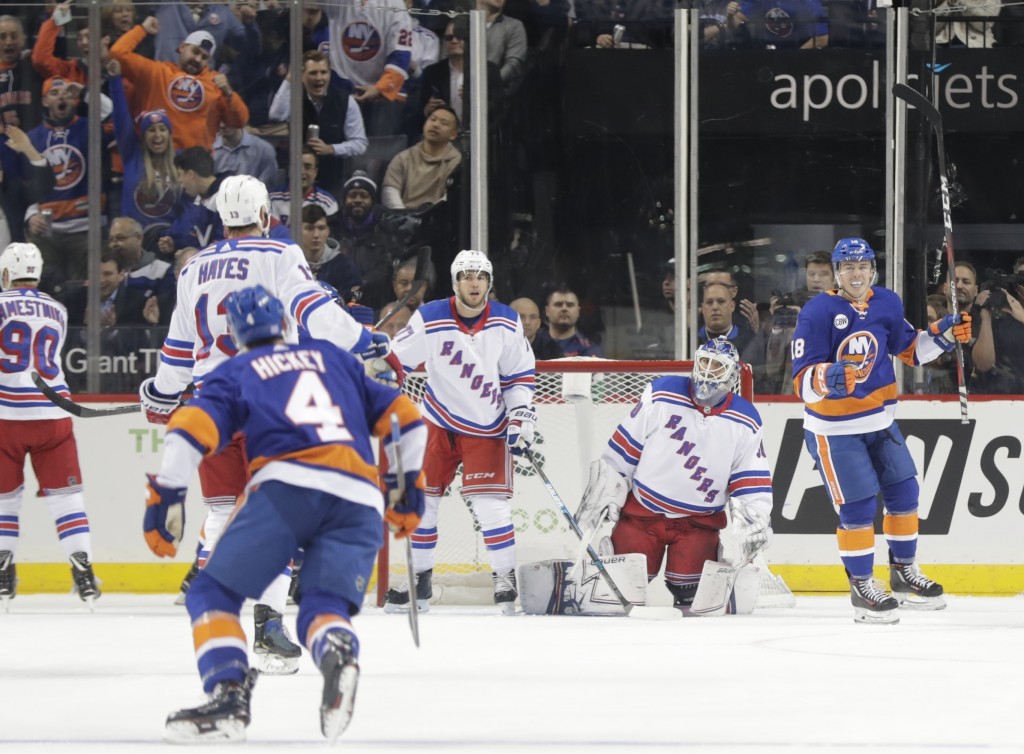 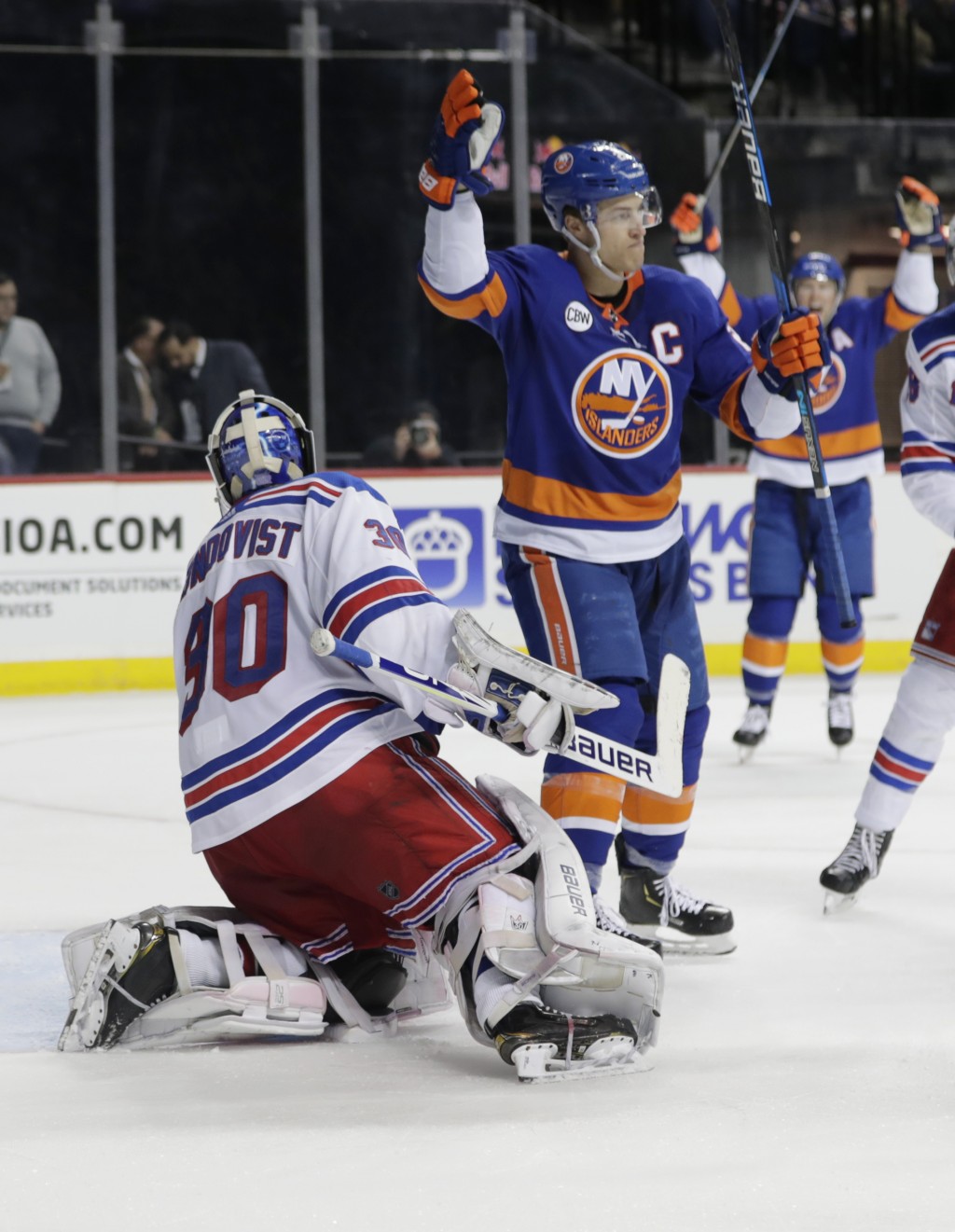 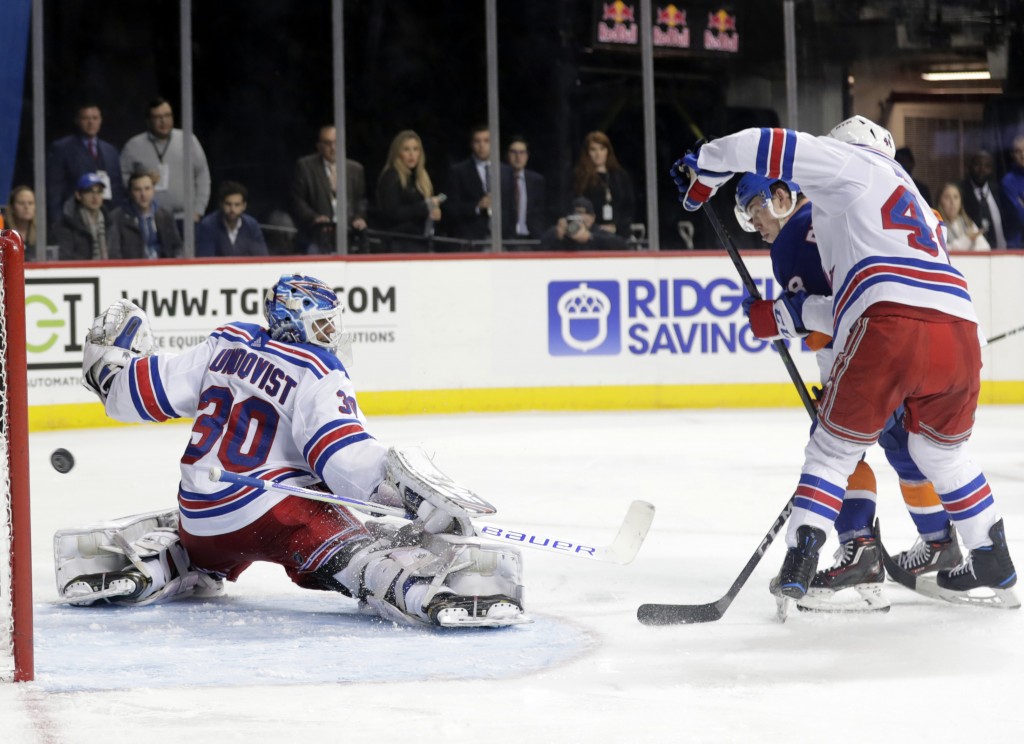 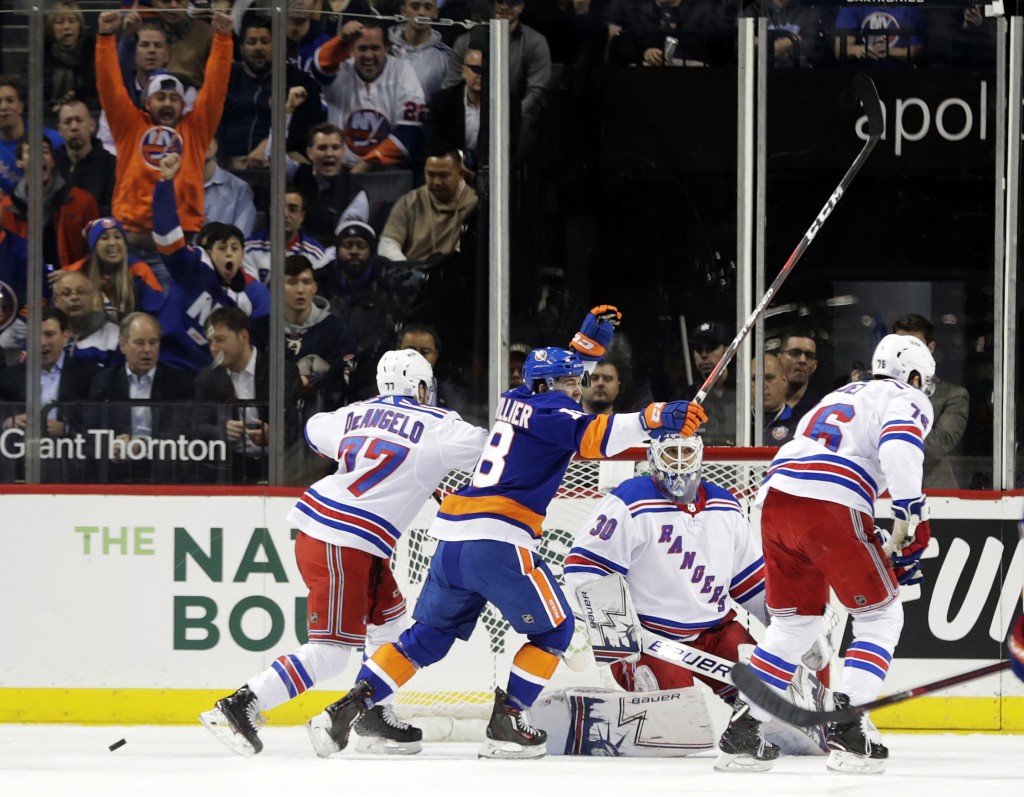 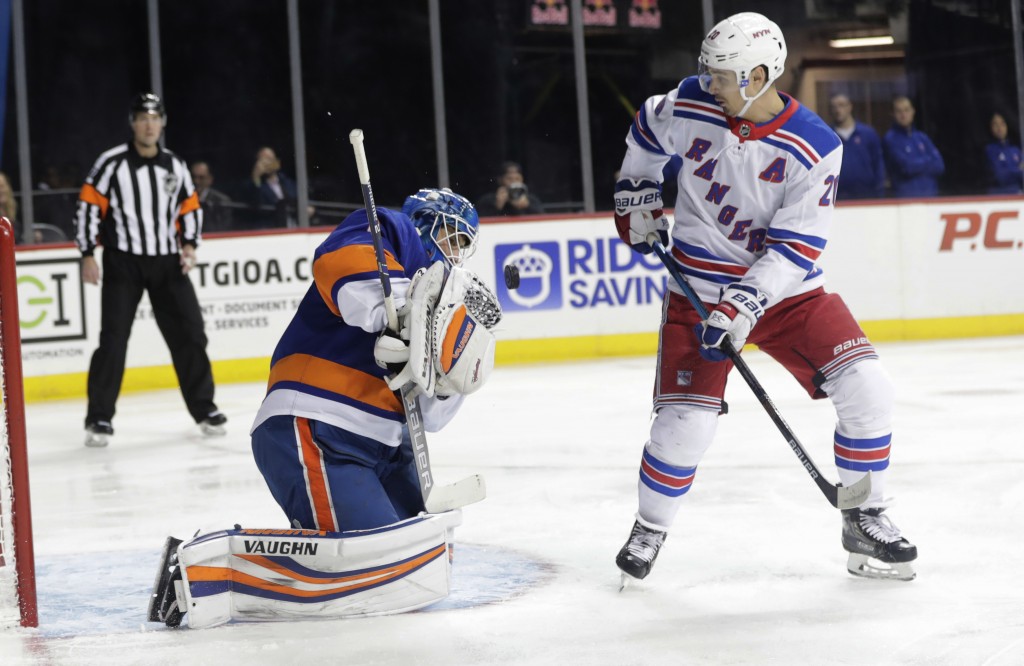 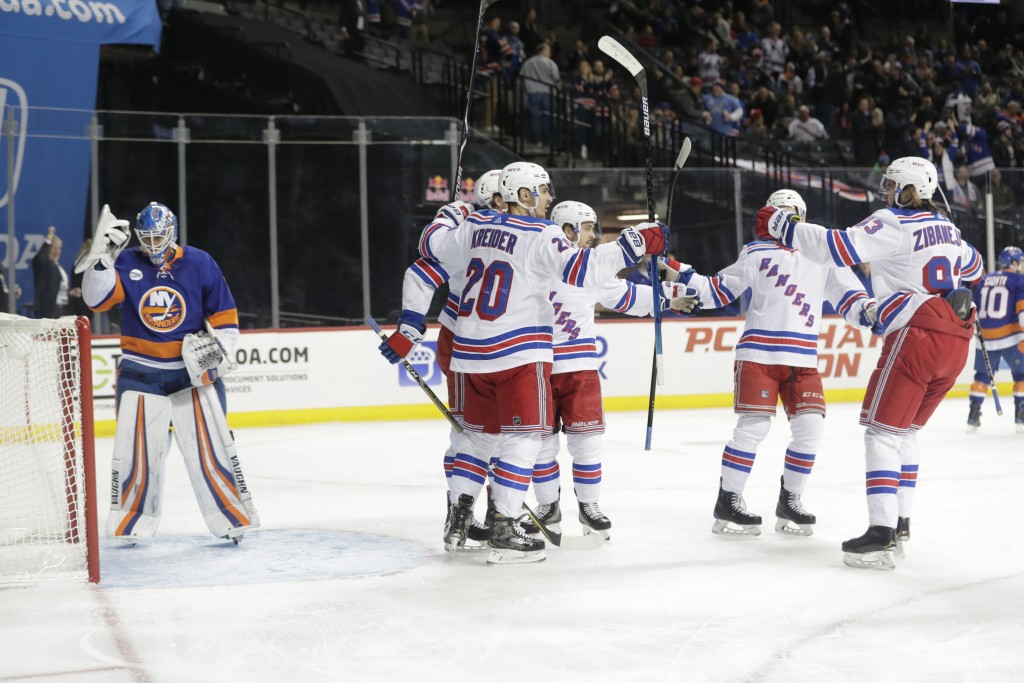 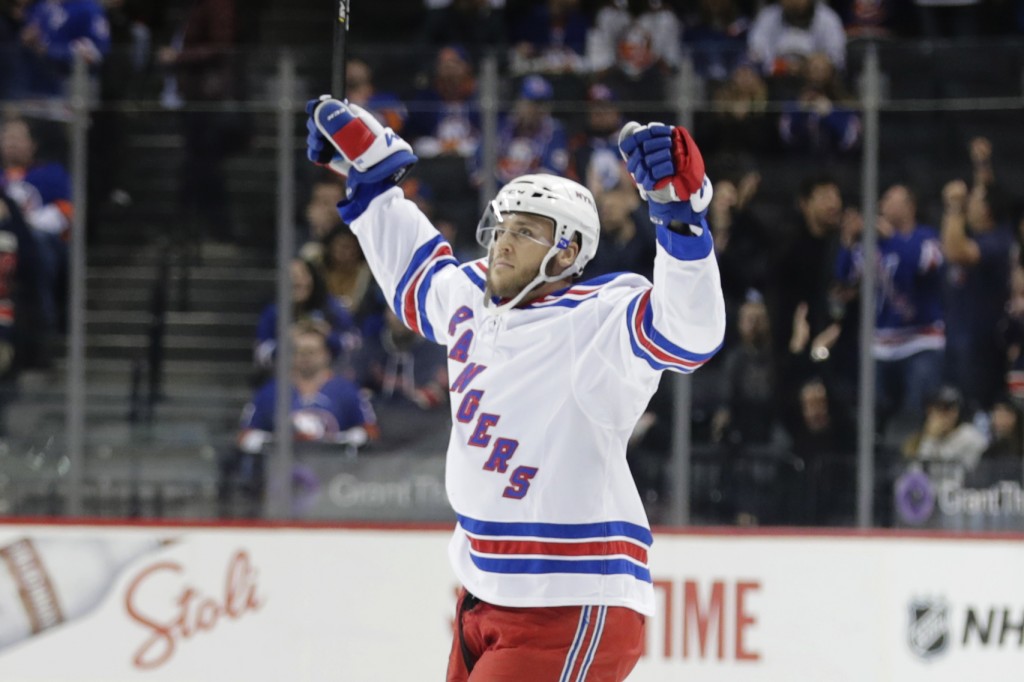 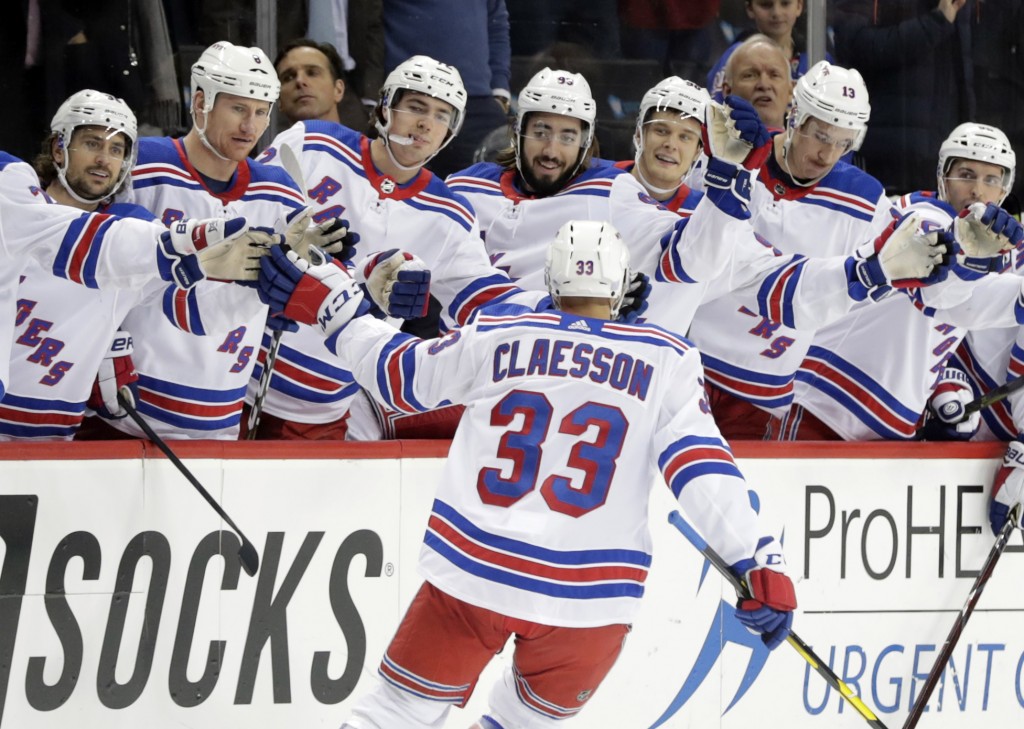 NEW YORK (AP) — Anthony Beauvillier had three goals and an assist, and the New York Islanders held off the Rangers 7-5 on Thursday night to keep up their recent mastery over their cross-town rival.

Leo Komarov had a goal and an assist, and Anders Lee, Brock Nelson and Cal Clutterbuck also scored as the Islanders beat the Rangers for the 12th time in 13 meetings since the start of 2015-16 season. Valtteri Filppula had three assists, Nick Leddy added two, and Thomas Greiss stopped 36 shots to help the Islanders get their seventh win in their last 10 overall.

Beauvillier got his first career hat trick and first four-point game as the Islanders, second in the Metropolitan Division, remained perfect in seven games against division teams this season.

Chris Kreider had two goals and Fredrik Claesson and Filip Chytil also scored for the Rangers, who were 6-0-1 in their last seven. Henrik Lundqvist gave up five goals on 17 shots through the first two periods. Alexandar Georgiev replaced him to start the third and had five saves.

Komarov scored midway through the third to give the Islanders a 6-3 lead after trailing 2-0 less than six minutes into the game.

Kreider's second power-play goal of the night with 6:47 left pulled the Rangers back within two, and Chytil scored with 2 1/2 minutes remaining to make it 6-5.

The Rangers pulled Georgiev for an extra skater with a little more than two minutes remaining but couldn't get the equalizer. Clutterbuck sealed the win with an empty-netter with 21 seconds left.

The Islanders finished 2 for 5 on the power play, and the Rangers were 2 for 4.

Beauvillier put the Islanders ahead 3-2 with his second of the night when he skated in on a breakaway and beat Lundqvist at 2:24 of the second period.

However, the Rangers tied it with a short-handed goal 57 seconds later as Hayes got the puck near center ice, skated up the left side and beat Greiss from the left circle with his fourth. It was the first short-handed goal allowed by the Islanders this season.

Beauvillier, who had just one goal in his 16 games this season, put the Islanders back ahead for good when he deflected Johnny Boychuk's shot past Lundqvist on a power play at 5:13.

The Islanders, 2 for 24 on the power play in their previous six games, got their second of the night with the man advantage. Lee deflected Leddy's point shot down past Lundqvist for his sixth with just under six minutes left in the middle period to push the lead to 5-3.

The Rangers got on the scoreboard first with a pair of goals 35 seconds apart. Kreider scored on a power play by backhanding the rebound of Neal Pionk's shot from center point past Gress for his ninth.

Brett Howden then stole the puck in the right corner and passed it across to Claesson beyond the left circle, and he fired it past Greiss at 5:35 for his first since signing with the Rangers in the offseason.

The Islanders tied it with two goals 1:03 apart midway through the opening period. Beauvillier, standing in front of Lundqvist, deflected Thomas Hickey's shot from the right point up over the goalie's shoulder at 9:35.

Nelson tied it when Leddy's point shot deflected off him in the left circle and past Lundqvist for his ninth at 10:38. It gave Nelson eight goals and 12 points in his last 12 games.

NOTES: Kreider played in his 400th regular season game. ... Rangers F Vladislav Namestnikov played in his 300th game. ... Hayes had the Rangers' third short-handed goal this season. ... The Rangers' Mika Zibanejad had an assist on Kreider's goal, giving him 15 points (eight assists) in his last 15 games. ... Islanders placed forwards Casey Cizikas and Andrew Ladd on IR retroactive to Tuesday. F Matt Martin, who missed the previous five games due to an upper-body injury, was placed on IR retroactive to Nov. 1. Stephen Gionta and Michael Dal Colle were recalled from Bridgeport of the AHL. ... Beauvillier now has six goals and six assists in seven career games against the Rangers. ... Filppula has 17 assists and 21 points in 21 games against the Rangers.