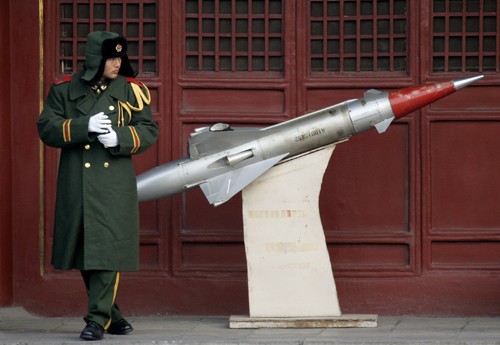 China needs a strong and credible military, the government said yesterday in a key policy document, citing what it termed security challenges it cannot ignore, such as Taiwan's independence drive.
North Korea's nuclear program and a strengthening U.S.-Japan alliance are also evolving factors that make Asia-Pacific security more volatile, forcing China to boost its armed forces, the 2006 Defense White Paper argued.
"To build a powerful and fortified national defense is a strategic task of China's modernization drive," said the white paper, the fifth ever issued by Beijing.
It said that China's defense expenditures had grown by more than 15 percent every year since 1990, although that figure falls to 9.6 percent once inflation is taken into account.
China's defense white papers are scrutinized carefully by overseas observers for clues about future policies and the fate of the 2.3-million-strong People's Liberation Army, the world's largest military.
"The struggle to oppose and contain the separatist forces for 'Taiwan independence' and their activities remains a hard one," said the white paper.
The Taiwan authorities still pose "a grave threat to China's sovereignty and territorial integrity, as well as to peace and stability across the Taiwan Straits and in the Asia-Pacific region as a whole," it said.
China and Taiwan have been separated since the end of a civil war in 1949, but Beijing still considers the island part of its territory, awaiting reunification, by force if necessary.
Looking at the overall situation in the Asia-Pacific, the paper argued that "new changes have occurred in the hotspots in the region."
"The United States and Japan are strengthening their military alliance... (Japan's) military posture is becoming more external-oriented," it said.
"(North Korea) has launched missile tests and conducted a nuclear test."
Addressing its own nuclear capability, China said it was based on "a self-defensive nuclear strategy."
"Its fundamental goal is to deter other countries from using or threatening to use nuclear weapons against China," it said.
China remains firmly committed to the policy of no first use of nuclear weapons at any time and under any circumstances, it said. By the middle of the century, China aims to be capable of winning "information wars," a form of conflict in which high-tech operations such as attacks on the adversary's computer systems play a crucial role.