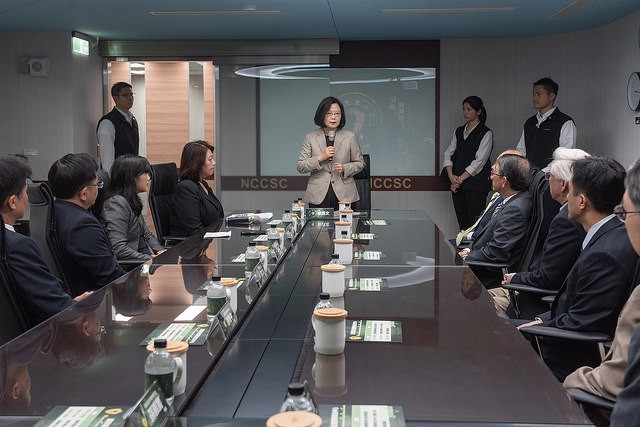 The President attended the opening ceremony of the National Communications and Cyber Security Center (NCCSC) on Thursday, which she considers “a landmark” for Taiwan’s information security development, according to the press released from the Presidential Office.

Reiterating her statement that “cyber security is national security,” President Tsai noted that Taiwan is situated in a volatile and complex global environment, wherein information security stands at the forefront of national defense.

“We don’t have much time,” said the President, urging various government ministries to work together and speed up the construction of information technology protection, as well as the incubation of talent and experts in the field of cyber security.

Speaking about the establishment of the NCCSC, President Tsai expressed confidence that the government will better deal with such tasks as information security management, computer attack responses, and collaboration with international partners in cyber security, among several other factors.

“Cyber security capabilities are also an important signal for national power,” said President Tsai, adding that building a safe, unobstructed, and reliable broadband is key to realizing a digital nation, an important policy promoted by the Tsai administration.

Through improving information protection in Taiwan, “we can reinforce digital governance, improve the digital economy, and push for industrial transformation,” said the President, calling for collaborative efforts between the private sector, non-governmental organizations, and the government.