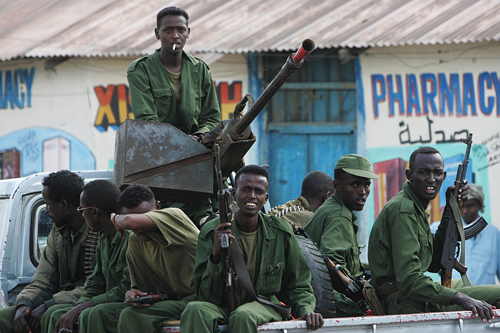 The U.N.-backed Somali government yesterday moved swiftly to assert authority over the capital that an Islamic movement's fighters abandoned the day before, though the leader of the Islamic group vowed to continue to fight.
Somalia's prime minister was preparing to enter the capital, Mogadishu, which Islamic forces held for six months before a string of defeats in the last 10 days at the hands of government troops backed by Ethiopian soldiers and jets.
Sheik Sharif Sheik Ahmed, the executive leader of the Council of Islamic Courts, told The Associated Press yesterday that his fighters would not be pushed out of Somalia.
"We will not run away from our enemies. We will never depart from Somalia. We will stay in our homeland," he said from the southern coastal port of Kismayo, where his forces retreated from Mogadishu.
Until now, Somali Prime Minister Mohamed Ali Gedi has ruled from Baidoa, the single Somali town the government held before Ethiopian troops came to its aid, spearheading the rout of the Islamist militias that threatened to take control of the country less than two weeks ago.
"Now the difficult task of rebuilding the country begins," Gedi told an Associated Press reporter who was traveling with him. "We want to restore law and order."
Gedi said he is ready to bring peace to the nation.
"I want to disarm the entire country's general population," he said. "Our people are sick of civil war and instability."
Gedi himself was 30 kilometers to the west of the capital in Afgoye. He was expected to travel to Mogadishu later yesterday for a visit meant to symbolize the government's victory.
Advance groups of heavily armed Ethiopian and government troops began visiting key installations in the capital early yesterday.
Even before the rise of the Islamists - who tried to establish a government based on the Quran - Gedi's government was kept out of Mogadishu by clan violence. There was an attempt on his life during a rare trip to the city in November 2005.
Somalia's parliament is expected to vote today to impose three months of martial law on the country in a bid to silence the guns. The government has already appealed over the radio for police officers to return to work immediately.
Somalia's president, meanwhile, vowed to take the fight to Kismayo.
"We are going to go there (Kismayo) and confront them (the Islamic fighters)," Abdullahi Yusuf told reporters. "If we capture them (Islamic fighters) we will bring them to justice." He also pledged to go to Mogadishu, a place he last visited in 1977. He gave no date when he will go to the capital.
Yusuf said Ethiopian troops will remain in Somalia for the time being as "the government is not up to the level of taking back the entire country overnight."
The Islamic movement took control of Mogadishu six months ago and then advanced across most of southern Somalia, often without fighting. Then Ethiopian troops and fighter aircraft went on the attack in support of the government last week.