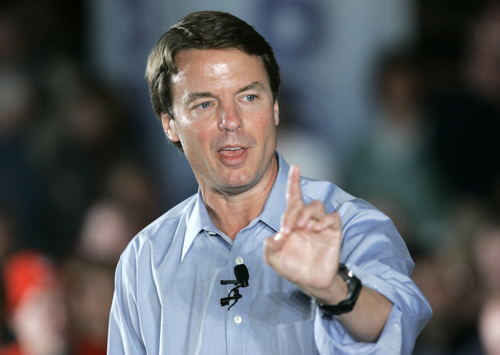 In a bleak New Orleans neighborhood still wrecked from Hurricane Katrina, Democrat John Edwards launched a run for the presidency on Thursday with a call to cut U.S. troops in Iraq, restore American leadership in the world and end poverty.
The Democratic vice presidential nominee in 2004 said the United States must lead not just with its military might but through a "moral authority" that had been eroded by the administration of U.S. President George W. Bush.
"We didn't used to be the country of Guantanamo and Abu Ghraib. We were the great light for the rest of the world and America needs to be that light again," said Edwards, wearing blue jeans, work boots and an open-neck shirt.
"We've had one of the most experienced foreign policy teams in history - (former Defense Secretary Donald) Rumsfeld, (Vice President Dick) Cheney - they've been an absolute disaster by any measure."
Edwards, 53, is the third candidate to formally jump into a Democratic race in which he ultimately might have to compete for money and support with leading contenders Senators Hillary Rodham Clinton of New York and Barack Obama of Illinois.
One December poll of 600 likely voters in Iowa, a crucial state because it holds the first presidential nominating contest in January 2008, placed Edwards joint first with Obama at 22 percent, although early surveys are not always seen as reliable indicators.
Edwards called for a U.S. exit from Iraq, starting with the withdrawal of 40,000 to 50,000 U.S. troops, saying that the only solution to the violence there was a political one. The former Senator from North Carolina voted to approve the war, but said he now realized it was a mistake.
He also said the United States should join the fight against global warming. Other nations, he said, "need to see our better angels again."
Edwards, the son of a millworker and the first person in his family to attend college, was one of the country's most successful and wealthy personal injury attorneys before entering politics in 1998.
He left the Senate after one term to run for president, entering the primaries as a potential "fresh face" before candidates like Howard Dean and Kerry zoomed past him to lead the pack.
His roots in the South, where he grew up in North and South Carolina, could be an asset for a party trying to broaden its appeal. The last three Democratic presidents - Lyndon Johnson of Texas, Jimmy Carter of Georgia and Bill Clinton of Arkansas - were from the South.