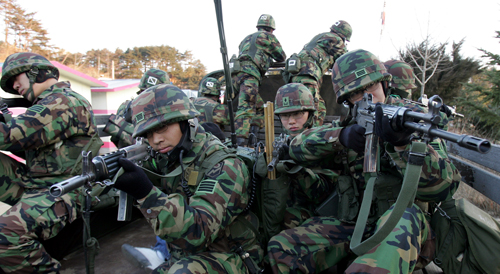 South Korea's Defense Ministry called North Korea a serious threat in a new report yesterday, saying it is believed to have about 50 kilograms of plutonium, enough to produce up to seven nuclear weapons.
The biennial defense report also said the North is believed to be capable of producing biological weapons, including anthrax weapons, and possesses up to 5,000 tons of toxic agents housed at many facilities.
The report described North Korea "as a serious threat, considering the serious nature of its nuclear test and threat of weapons of mass destruction," the ministry said in a statement.
North Korea stoked regional tensions in October when it conducted its first nuclear test, drawing U.N. sanctions and global condemnation.
Last year North Korea pledged to dismantle its nuclear program in exchange for security guarantees and aid. No progress has been made in implementing the agreement because of North Korea's objections to U.S. financial restrictions imposed on the communist regime for its alleged money laundering and counterfeiting.
During nuclear talks last week, North Korea continued to insist that the U.S. lift the sanctions before it would move ahead on dismantling its nuclear program.
Risk of attack
The report said North Korea has the capability to launch a surprise attack on South Korea without repositioning its troops because it deploys about 70 percent of its ground forces south of the capital, Pyongyang.
North Korea "is consistently preparing for war for a long period and is likely to keep this military policy in the future," the report said.
North Korea often accuses South Korea of conspiring with the U.S. to attack it, an accusation denied by Washington.
South Korea is trying to strengthen its defense capability as it prepares to regain wartime operational control of its forces, which have been under the command of U.S.-led U.N. forces since the 1950-53 Korean War.
Seoul regained peacetime control of its troops in 1994, but the U.S. is still supposed to control South Korean forces if a war breaks out. South Korea and the U.S. agreed in October that Seoul will retake control of its troops sometime between 2009 and 2012.
South Korean President Roh Moo-hyun, who has pursued a foreign policy that is less dependent on Washington, called for the transfer of command, saying the move is long overdue.
About 29,500 U.S. troops are stationed in South Korea as a deterrent against the North. The presence of the troops is a legacy of the Korean War, which ended in a cease-fire rather than a peace treaty.