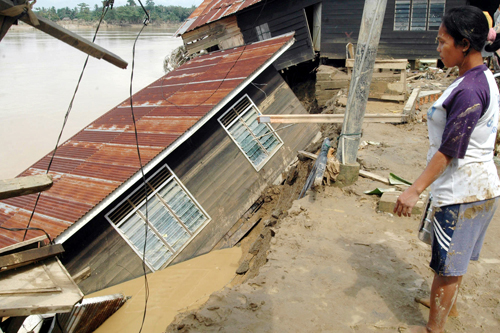 Thousands of people forced from their homes by flooding in Indonesia were cleaning up their houses and villages yesterday, but neighboring Malaysia was bracing for a second wave of high water.
In Indonesia's Aceh and North Sumatra provinces, where floods and related landslides killed at least 104 people, the number of displaced fell from 400,000 to nearer 200,000 as people returned from shelters on high ground and temporary government camps.
Aid was getting through to many of those in need of food and other basics, but rain was still heavy enough in some isolated areas to block relief shipments, officials said.
"There are still five villages and two districts that we cannot reach because of the rain," health ministry crisis chief Rustam Pakaya told Reuters, adding that 155 people were still missing and 222,231 remained displaced.
Many who had returned were cleaning mud and debris from their homes, but others found the task overwhelming.
"Some of them tried to go back home, but they came back again to the camps because their houses are still covered with mud," Pakaya said.
He said scores of health clinics had opened in badly affected areas to help treat and prevent medical problems.
Parts of peninsular Malaysia, across the Strait of Malacca from Sumatra, were also hard hit by floods, the Southeast Asian country's worst since 1969.
The Bernama news agency said at least 11 had been killed and 63,000 displaced, while the state Meteorological Department expected rains in Johor and southern Pahang to continue until Sunday.
"Of course, we hope there will not be a second round of the heavy rains that caused the current floods," the New Straits Times newspaper yesterday quoted Malaysia's Deputy Prime Minister Najib Razak as saying. "But we will be ready for it if it happens."
Officials said three states including Johor, the hardest hit, would remain on red alert.
"Other states have been put on standby," Che Moin Omar, director of the government's crisis and disaster management directorate, told the newspaper.
The opposition took the government to task over its handling of the crisis.
"One woman died because no rescue boat came despite promises of help by government agencies during the past 24 hours," said Lim Guan Eng, leader of the opposition Democratic Action Party.
Malaysian palm oil prices rocketed to 8-year highs on Thursday on fears floods could severely cut supplies. Johor is one of Malaysia's top palm oil producers.
The floods also raised concerns in Indonesia about flows of palm oil, rubber and coffee to markets and ports. Traders said damaged roads and bridges had disrupted transport and hampered delivery.
But in Aceh, home to major offshore natural gas fields and onshore processing plants, output and movement of natural gas were unaffected, industry officials said.
The floods came two years after a giant tsunami left around 170,000 dead or missing in Aceh, a remote but resource-rich province whose capital, Banda Aceh, is 1,700 kilometers northwest of Jakarta.
Authorities blame heavy rains and the effects of deforestation for the latest destruction. Lack of adequate cover leaves ground less able to absorb excess water or hold soil in place.