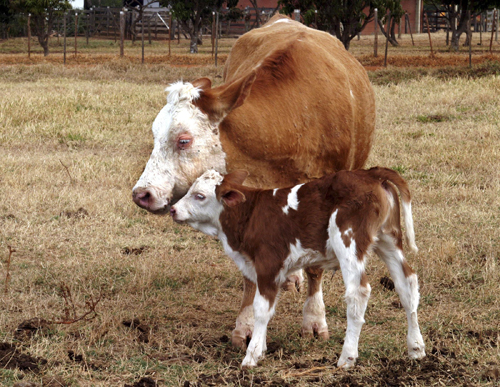 Meat and milk from cloned animals may not appear in supermarkets for years despite being deemed by the U.S. government as safe to eat. But do not be surprised if "clone-free" labels appear sooner.
Ben & Jerry's, for one, wants consumers to know that its ice cream comes from regular cows and not clones. The Ben & Jerry's label already says its farmers don't use bovine growth hormone.
"We want to make sure people are confident with what's in our pints," company spokesman Rob Michalak said. "We haven't yet landed on exactly how we want to express that publicly."
For food that does come from clones, the Food and Drug Administration is unlikely to require labels, officials said.
The FDA gave preliminary approval Thursday to meat and milk from cloned animals or their offspring. Federal scientists found virtually no difference between food from clones and food from conventional livestock.
The U.S. government believes "meat and milk from cattle, swine and goat clones is as safe to eat as the food we eat every day," said Stephen F. Sundlof, director of the FDA Center for Veterinary Medicine. Meat and milk from the offspring of clones is also safe, the agency concluded.
Officials said they did not have enough information to decide whether food from sheep clones is safe.
If food from clones is indistinguishable, FDA doesn't have the authority to require labels, Sundlof said.
Companies trying to distance themselves from cloning must be careful with their wording, he added.
"If the statement implies that that particular product might be safer than another product, FDA would not allow that," Sundlof said. "But there may be room for providing a contextual statement that is truthful and not misleading."
A dairy industry group said it is too early to use clone-free labels. The FDA is at least a year away from finalizing approval of food from clones.
"It really may be somewhat premature to be talking about a label when FDA said meat and milk won't be in the food supply in the foreseeable future," said Susan Ruland, spokeswoman for the International Dairy Foods Association.
She added that cloning is new and, so far, rarely used, while growth hormones have been in widespread use for more than a decade.
With members such as Kraft and Dannon, the association represents an industry worried about consumer reaction to cloning.
Right to choose
Surveys have shown most are uncomfortable with the idea of cloned livestock. Industry research shows overall sales could drop 15 percent once clones are allowed in the food supply.
"You hear a lot from the technology companies this week that this is a great technology - we're not hearing that yet from the people who would actually use it and the people who would sell the product," Ruland said.
For now, farmers and cloning companies are abiding by a voluntary ban on meat and milk from clones. The FDA said the informal ban would remain until its decision is final.
Critics want the final decision to include labels for food from clones.
"When they deny us mandatory labels, they don't just deny us the right to choose," said Andrew Kimbrell, executive director of the Center for Food Safety.
"They also deny our health professionals the ability to trace potential toxic or allergic reactions to this food," Kimbrell said. "It's bad enough they're making us guinea pigs. But when we have health effects, we won't be able to trace it."
Jim Greenwood, president of the Biotechnology Industry Organization, said labeling meat from a clone would be as absurd as telling consumers that a steak was produced through artificial insemination, or by cows actually mating.
"None of that information would be useful to consumers," Greenwood said.
Federal scientists studied reams of data on the composition of meat and milk from clones and those of conventionally bred animals.
"You can't tell them apart," said L. Val Giddings, a vice president of IO and a former Agriculture Department geneticist. "There is not an analytical, scientific test you can use to tell one from another. You just can't do it."
The cloning industry says the technology is latest in a series of reproductive tools for farmers and ranchers to help deliver the food consumers want. To produce a clone, the nucleus of a donor egg is removed and replaced with the DNA of a cow, pig or other animal. A tiny electric shock coaxes the egg to grow into a copy of the original animal.
Cloning companies say the technology would be used primarily for breeding and not for steak or pork tenderloin. Thus, consumers would mostly get food from their offspring and not from the clones themselves.
Still, some clones would eventually end up in the food supply. As with conventional livestock, a cloned bull or cow that outlived its usefulness would probably wind up at a hamburger plant, and a cloned dairy cow would be milked during her breeding years.