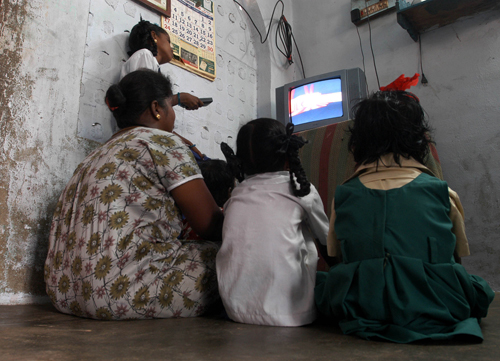 These days, it seems, the huddled masses are yearning to get free TVs.
Declaring color television a basic necessity, an Indian political party promised free sets to the poor and swept to power in May in the southern state of Tamil Nadu. So far, the Dravida Munnetra Kazhagam party, or DMK, has handed out 60,000 sets and plans to give away 30,000 more in coming months.
As far as political platforms go, this one clearly has been a winner.
"I will always vote for DMK," said Parimala, a 51-year-old widow who like many in these parts uses only one name.
Peeling onions on the bare floor of her tiny, 2-by-1 meter living room, her eyes hardly wavered from the soap opera playing at full volume on the 36-centimeter box adorned with a purple sticker reading: "Government of Tamil Nadu Color TV 2006."
An electoral stunt for sure, but one that illustrates how populism has emerged as the default position of parties across India's political spectrum as they contend with the fading of once-dominant ideologies.
The Congress Party, which has dominated India for much of post-independence history, is struggling to find a new path since abandoning the socialism espoused by the nation's first prime minister, Jawaharlal Nehru. Hindu nationalism also is not the force it was just a decade ago.
Many areas have seen the rise of populism, with politicians offering a mishmash of social programs and other promises to the masses.
But no one has gone as far as Tamil Nadu's DMK. Part of the reason is money: Tamil Nadu is one of India's wealthiest states, giving its government full tax coffers.
"In other states the populism is mainly rhetoric, but in Tamil Nadu they can afford to give out so much," said Kamal Mitra Chenoy, a political scientist in New Delhi. "The kind of material benefits to the voters in Tamil Nadu are unprecedented."
The state's two main political parties - the DMK and the All India Dravida Munnetra Kazhagam - face the problem of not being very different from one another.
Trading leadership
Both push regional Tamil rights and champion the poor. And both are led by film industry celebrities - DMK has M. Karunanidhi, a flamboyant former screenwriter; its rival has former Tamil star actress J. Jayalalithaa.
The two parties have traded leadership of the state for three decades, and "since the battle is so tight they resort to these kind of promises," Chenoy said.
Thus, the free TVs - and houses and stoves and whatever else can be used to lure voters.
Paramila's tiny house in Sumathuvapuram, a village on the outskirts of Kanchipuram, a city famed for its temples and silks, is one of about 100 homes built here by DMK for supporters in a key election district after the party came to power in 1996.
DMK was voted out in 2001 but staged a comeback in last May's elections, and now voters like Paramila are eager for the goodies they were promised during the campaign.
"In January, they are giving us gas stoves," she said with a grin.
Politicians wrap such giveaways in the justifying language of social welfare.
Television, "nowadays, it is not just entertainment, it is more, it informs about health, politics and public awareness issues," said DMK's party secretary, T.K.S. Elangovam,
Farm workers could not afford to buy a TV set on the US$1.30 a day most earn, he said. Besides, the sets are no burden to state coffers, bought at bulk for about US$60 each, he said.
Not everyone sees the giveaways in such altruistic terms.
"The problem is that the bulk of the money goes to freebies instead of to development," said S. Viswanathan, editor of Tamil Nadu's Industrial Economist magazine.
Critics also note that relatives of Karunanidhi, the party leader, own the region's main cable company, Sumangali Cable Vision, and the free TVs have helped boost subscriptions.
The cost - an initial payment of US$11 plus a monthly charge of US$2.20 - is steep for the poor, but 30 of the 100 households that got TV sets in this village have signed up.
Perhaps that will provide the party with a new opportunity to make promises.
"Tell the government they must reduce the rate," said Alamelu, a 35-year-old housewife, waving her TV remote control in the air. "I had to take out a loan for the deposit."