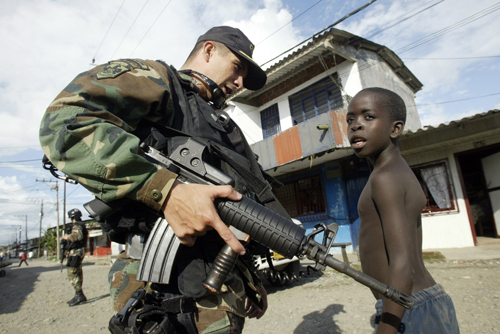 In a slum church fortified by steel doors, the Reverend Ricardo Londono teaches children music, hoping to steer them away from becoming killers.
"We are convinced that every child that picks up an instrument is less likely to pick up a gun," he says as children joyfully raise a cacophony with drums, recorders and cellos.
The Catholic priest is well aware of the dangers on the streets of this impoverished neighborhood called Antonio Lleras: The day before, two men were shot just blocks from the church. A day later, two more men would be gunned down nearby.
This is Buenaventura, a city where drug-traffickers and demobilized veterans of Colombia's political violence are warring with a seriously underpowered police force in a struggle that has killed hundreds in the streets this year.
"They all are fighting for control of this zone because it's close to the sea and that, for them, is strategic," said Londono, who has run this church for eight years. "The young people look to them for jobs as a narco, an informer or a hit man."
Some 350 kilometers southwest of Bogota, the city of 300,000 is the country's largest port. It's from here that the coffee is exported and the imported cars roll in.
The port is also a key way station for the world's largest cocaine industry. Some 20 tons have been captured in and around Buenaventura this year, a third of all the cocaine netted along the Pacific coast.
Being poor and having a port make Buenaventura a tempting place for drug traffickers, said Roy Barrera, the region's congressman. "This perverse marriage of these armed groups and drug traffickers has turned the town into a ghetto in the hands of the mafia."
Lying halfway down Colombia's 1,300-kilometer Pacific coast, Buenaventura is its biggest slum. According to the government, some 80 percent of the mostly Afro-Colombian population survives on less than 7,500 pesos (US$3) a day, compared with a national rate of 50 percent.
Killings have doubled in two years to top 300 in 2006 - 24 times the homicide rate of New York City. And that doesn't include the unknown numbers who have disappeared.
The authorities appear to have little control over the daily slaughter.
Days after publicly denouncing the drug traffickers' infiltration of the city, Buenaventura's Roman Catholic bishop, Hector Epalza Quintero, began receiving death threats. He fled the city, returning four weeks later.
The hefty bribes thrown around by drug traffickers put heavy pressure on city institutions.
During a town hall meeting on October 27 to discuss security, President Alvaro Uribe dramatically demanded the arrest of the city's top security official, who sat just meters away and had just been accused by a naval officer of offering him a bribe to return an intercepted cocaine shipment.
Following a peace deal with Uribe's government, many so-called paramilitaries from right-wing groups demobilized and returned to lives of poverty, whereupon some hooked up with drug traffickers.
In Antonio Lleras, where the children learn to make music, battle lines are clearly drawn. The neighborhood is controlled by the leftists, and the one next door by rightists. No one crosses between the two.
The stench of rubbish hangs in the air of Antonio Lleras and people live in wooden shacks, some with only black plastic garbage bags for walls.
With no room left on land, newcomers build huts on stilts in the water. Farther out in the deeper waters, people here whisper, some of those killed in the conflict are weighed down with concrete.
Emilio Mosquera, a 22-year old father of three, sits on a plastic chair in broiling tropical sun, his shack precariously perched above the bay. His next-door neighbors left after their floor collapsed into the water.
"The main problem is that there's no work for us," Mosquera said as men slammed dominoes on a table behind him. "The odd job we get, mostly unloading and loading timber on to the boats, pays 15,000 pesos (US$6) a day. But you work one day and then there's nothing for a week."
When asked about the killings, Mosquera turns away and says: "I'm not getting in to that."
Across much of urban Colombia, left-wing militias are lying low in the face of greater police vigilance. But not in Buenaventura.
After one man was killed recently, his corpse was rigged with a bomb that injured two of the policemen who arrived on the scene.
The violence is so bad that a special forces unit of Colombia's marines has set up a base in the Antonio Lleras slum after gunmen riddled a funeral procession with bullets.
"These are our abandoned countrymen," Major Juan Vega, who oversees the base, said as he watched children play in the dirt, his rifle at the ready. "Most don't have water, most can't afford to eat regularly."
His voice trailed off as he took in the stench and the filth.
"Very abandoned."