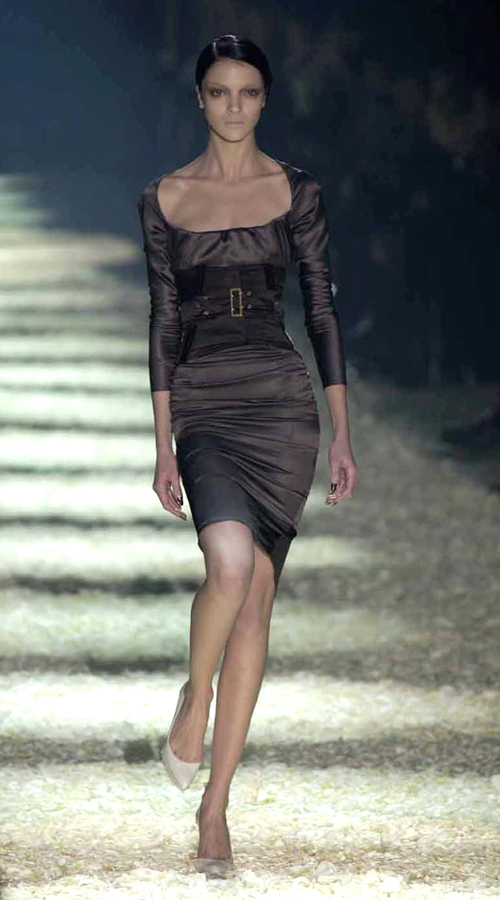 When designer Coco Chanel unveiled the first real "Little Black Dress" 80 years ago, it caused quite a stir in the world of women's fashion
Now the iconic garment is so ubiquitous it has its own entry in the New Oxford Dictionary and online Wikipedia encyclopedia.
Fashion's most timeless of octogenarians today remains as much a style statement as it was in its first daring incarnation in 1926 - a symbol of simple, practical chic.
With New Year's Eve celebrations approaching, the LBD, as it is known for short, is likely be the sartorial choice of women of all ages and places, eager to exude elegance or avoid a fashion faux pas.
"What she invented is more a 'principe,' an idea, the fact that a dress can be used in different situations and can be changed by the addition of accessories," said Paris-based fashion historian, teacher and author Florence Muller.
Up until the 1920s, female elegance meant changing outfits for every occasion or part of the day, with highly-decorative clothes that were heavy, uncomfortable and often required a helping hand to put on.
Chanel's revolution ushered in the one dress that could be worn from dawn till dusk with little adornment apart from well-chosen costume jewelry, yet remain the ultimate in modern elegance, Muller said.
The initial LBD was a simple crepe creation with a high neckline, long fitted sleeves and cut to just above the knee, with no buttons, embroidery, layering or fringing. And it was in black, a color associated in post-World War I Europe with mourning, the clergy or worse, a servant's uniform.
'Chanel's Ford'
Vogue magazine's French edition in November 1926 dubbed it the "uniform of the modern woman," while its American counterpart called it "Chanel's Ford," a reference to Henry Ford's mass production of the car making it affordable and therefore accessible to all.
"For any girl, any woman with little money, it's marvelous to have the possibility of having one dress for the whole season, for the whole year, and be well dressed.
"It's an economy," said Muller, who teaches at the Institut Francais de la Mode and has just written a book, "Les Paruriers - Bijoux de la Haute Couture" ("Costume Jewelry for Haute Couture").
Since then, the LBD has gone on to inspire leading designers and high street stores through the decades, constantly reinvented in shape, cut, fabric and detail, but remaining a wardrobe staple.
It has had books and an exhibition devoted to it, while movie actresses are often still associated with the stylish Little Black Dress they wore in a certain scene of a film years earlier.
Audrey Hepburn was photographed in various black dresses, but a long one she wore in the 1961 movie "Breakfast at Tiffany's," worn with a pearl choker and designed by Hubert de Givenchy, is often described as the definitive LBD.
It sold at auction recently in London for US$807,616, or some six times the reserve price.
Australian pop star Kylie Minogue wore a demure Little Black Dress for one of her early public appearances following treatment for breast cancer when she attended Chanel's haute couture show in Paris last July.
And British actress and model Elizabeth Hurley stole the show when she attended the premiere of the 1994 film "Four Weddings and a Funeral" in a sexy, safety-pin-held Versace version.
Karl Lagerfeld, Chanel's artistic director since 1983, has put the LBD's enduring success down to the fact that "one is never over or under dressed with a little black dress," according to written quotes supplied by the fashion house.
"A woman never looks bad in a little black dress, they can always trust that look," the veteran German designer is attributed as having said.
The Little Black Dress has even leant its name to a Toronto-based personal shopping and image consulting company, set up in 2005 by stylist and former Canadian model Monifa Miller, who said she chose the title to give the idea "of something that is essential."
Never outdated
She said the LBD was a constant in a woman's wardrobe, which she tended to refer her clients to because its simplicity meant they would get a lot of wear out of it. "A black dress, it's not really going to go out of style," she said.
While some may put its lasting popularity down to black's quality of flattering the complexion as well as showing off, or being forgiving on, the figure, others point to its reassuring safety when unsure how to dress for an occasion.
But for Gabrielle 'Coco' Chanel, it was apparently simply a sign of impeccable taste.
"Really, they are so badly dressed... I will put them all in black to teach them good taste," she was quoted as saying by Albert Flament in "L'Illustration" of November 1932, according to the house of Chanel.