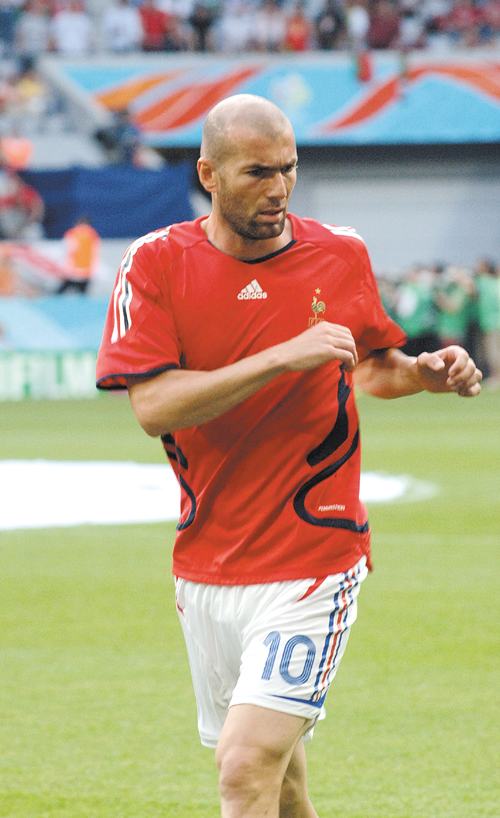 An Italian fashion designer has launched a new range of leisure wear inspired by Zinedine Zidane's infamous headbutt on Marco Materazzi in this year's World Cup final.
The logo on Alessandro Ferrari's new line of T-shirts and fleeces features a man headbutting another man, but condemns the Frenchman's violent reaction to Materazzi's provocation.
The two figures are set beside a target symbol made up of the colors of the French and Italian flags, signifying the coming together of the two nations after the final.
Ferrari's new range is called Xqua - pronounced "Perqua" - a play on words following the now legendary "Pourquoi, Zidane?" ("Why, Zidane?") exclamation made by a French football commentator.
"The idea came to me on a wave of emotion after Italy won the World Cup," Ferrari was quoted as saying by Italian news agency Fidest.
"After Zidane's headbutt on Materazzi I thought of turning that unsavory act into a positive social message aimed at the youngsters, and at the same time offering a trendy product of high quality.
'Pourquoi, Zidane?'
"The name of the branding was born out of the 'Pourquoi, Zidane?' commentary and the questioning of any act of violence."
The Zidane-Materazzi incident triggered a whole host of commercial spin-offs, including songs, video games and joke books.
Materazzi recently published a book entitled: "What I really said to Zidane," which includes phrases he might have said to the former France captain. The proceeds from the book are going to children's charities.
Zidane was sent off in the second period of extra time in the July 9 World Cup final for head-butting Materazzi, who had insulted the French midfield maestro.
Italy went on to defeat France 5-3 on penalties after the match had finished tied at 1-1. Zidane put France ahead with a penalty kick before Materazzi headed the equalizer.
Zidane retired from football after the World Cup.