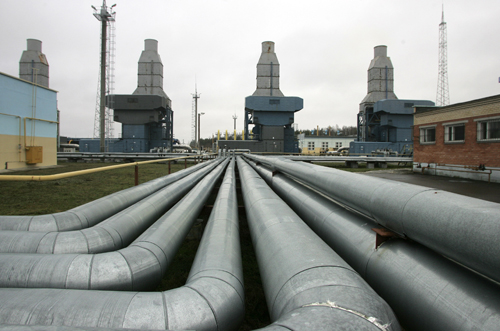 Russia's natural gas monopoly has warned Belarus not to siphon gas from the main pipeline leading across its territory to Europe if it goes ahead with a threatened supply cutoff on New Year's Day.
The European Union and Germany, meanwhile, urged the neighbors to resolve their price dispute quickly and guarantee supplies.
But with both sides refusing to back down, Minsk repeated its threat to disrupt deliveries of Russian gas destined for Europe if state-controlled OAO Gazprom shuts off gas supplies meant for Belarus.
"We will not be able to deliver gas to Europe without a contract," Belarusian Prime Minister Sergei Sidorsky said late Thursday on state television.
Gazprom has demanded that Belarus buy gas at more than twice the current price next year and pay for the increase in part by ceding a half-share of its own government-controlled pipeline operator. Belarus is ready to sell 50 percent of Beltransgaz but wants to keep the gas price lower.
The dispute echoes last year's conflict over gas prices with Ukraine, which led to brief supply shortages in some European nations after Gazprom suspended deliveries to Ukraine and accused it of siphoning gas meant for transit.
The gas war with Ukraine provoked European concerns about Russia's reliability as a key energy supplier, and Gazprom spokesman Sergei Kupriyanov said the company will do everything it can to fulfill its obligations to European customers.
Russia provides for a quarter of Europe's gas consumption, with about 30 percent going through Belarus.
Kupriyanov warned Belarus not to disrupt flows through the Yamal-Europe pipeline, which carries about two-thirds of the Russian gas that transits Belarus on the way to European countries - mainly Germany, Poland and Lithuania.
"Yamal-Europe is exclusively an export pipeline" and is owned by Gazprom, he said, adding that its connections with the rest of the Belarusian system are sealed and that any attempt to disrupt the flow through Belarus would be detected by the company at its headquarters in Moscow.
While Gazprom owns Yamal-Europe, it is under the day-to-day operation of Beltransgaz.
The head of Gazprom's export arm acknowledged that despite a buildup of underground reserves in European nations and the option of increasing the flow of gas exports through Ukraine, shortages could still occur in Europe, according to an interview with French daily Le Figaro.
Alexander Medvedev warned that "if Belarus siphons off a part of the gas destined to our European clients that crosses its territory, that gas will be missing from the system.
"I cannot, therefore, exclude any future forced rationing of our stocks and, therefore, shortages for our clients," he was quoted as saying in an interview released by the newspaper before publication yesterday.
"I ask my Belarusian colleagues to think hard before taking that path."
Gazprom, which has been raising prices closer to market levels after selling gas cheaply to ex-Soviet republics for years, is demanding Belarus pay US$105 in 2007 - with about a third of the cost to be paid by ceding 50 percent of Beltransgaz.
Belarus now pays US$47 per 1,000 cubic meters of Russian gas, and has offered to pay US$75 dollars, including US$45 in cash and the rest in Beltransgaz shares.
A higher price would be a blow to Belarus' Soviet-style state-run industries, whose financial health - and, in turn, a portion of authoritarian Belarus President Alexander Lukashenko's popularity - depends on cheap gas.
Shaken by last year's dispute between Russia and Ukraine, the European Union called on Belarus and Russia to resolve their conflict as soon as possible and guarantee continued and adequate supplies to EU nations.
EU Energy Commissioner Andris Piebalgs said the EU was "following the situation very closely since it may affect gas supplies to the European Union," and called for a swift agreement "that does not put in question gas transits to the EU."
German Economy Minister Michael Glos said Germany "views with concern the dispute ... and the delivery shortfalls for Europe that might be connected with it."
He urged the sides to "to reach a workable agreement as soon as possible ... and thus provide proof of their reliability as delivery and transit countries."
Glos' ministry said, however, that there was no threat to supplies in Germany, in view of gas companies' storage capacities and the fact that relatively little of Germany's gas - about 30 percent - transits through Belarus.