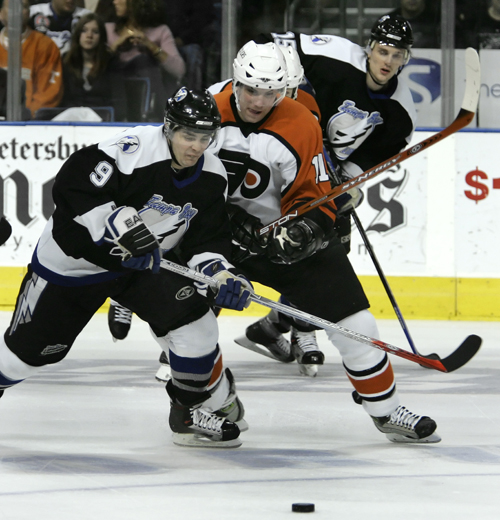 They call them momentum saves in hockey - big saves that can turn around a game and even end a losing streak.
Robert Esche made a number of such saves Thursday night at the St. Pete Times Forum as the Flyers halted their franchise-record 10-game losing streak with a 4-3 victory over the Tampa Bay Lightning.
Esche made a career-high 42 saves, including 18 in the second period when the Flyers gained momentum off his work with two goals. He had not started a game since November 18 at San Jose as he recovered from surgery on his right groin.
"It wasn't that big a deal and it was a no-lose situation because we lost 10 in a row and there's no pressure on," Esche said.
"I know what kind of goalie I am. A battling goalie. I know how I have to play."
Esche said he was in pain for the entire game. "It was definitely sore," he said of his groin. " ... I battled through it. But I was seeing the puck well and didn't think about it much."
The victory also snapped the Flyers' 10-game losing streak against the Lightning since April 4, 2003.
"You want to win hockey games and we haven't beaten this team in a long time and I thought our start was great. ... We had energy," coach John Stevens said.
Esche had a 4-1 lead before Tampa Bay made it dicey in the third period with a pair of goals.
"They made it tight there, but I thought the work ethic and fight on the puck was terrific," Stevens said. "Peter Forsberg led the way there."
Forsberg had three points and Simon Gagne had his fifth two-goal game. The top line with Mike Knuble was plus-6.
"As a line, as a team, we played a good game," Forsberg said. "We have to be a plus line if this team is going to win. As a line, we worked and created chances all over the ice, battled hard down low."
The Flyers scored first on a power play on Alexei Zhitnik's first goal as a Flyer at 4 minutes, 1 second. Shortly after, Esche poke-checked the puck away from Vincent Lecavalier, who came streaking in off a dynamic feed from Martin St. Louis.
"He was confident; you could see it in his face and in his movement," Gagne said of Esche. "Every time he was facing a shot, he was confident to stop it, and even on the rebounds, too."
St. Louis tied the game at 10:06. The Flyers jumped ahead at 16:41 after a pass from Alexandre Picard up the middle of the ice to Forsberg. The play ended with Mike Knuble's give-and-go to Gagne.
Gagne notched his second goal at 9:30 of the second period. Pitkanen lasered a hard pass on net that Gagne converted for his 19th goal, making it 3-1.
"First time I heard music in here in a long time," Todd Fedoruk said in the locker room afterward. Fittingly, the boom box was blaring beside Esche's locker.
In other NHL action Thursday: Buffalo 4, Carolina 1; Detroit 7, Columbus 4; Los Angeles 7, Edmonton 4; Phoenix 3, San Jose 2.