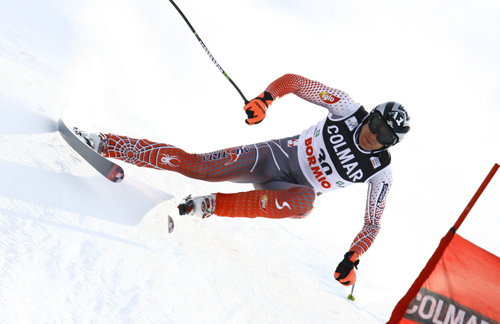 Austria breathed a sigh of relief after Michael Walchhofer won the first of two Bormio men's Alpine skiing World Cup downhills by the smallest possible margin on Thursday.
The downhill World Cup champion, starting 30th, powered down the daunting Stelvio piste to post a winning time of one minute 51.90 seconds after Switzerland's Didier Cuche had clocked 1:51.91.
Thursday's race was rescheduled from the French resort of Val d'Isere because of warm weather there earlier in the month. A second downhill follows on Friday.
"This is certainly a big win for me but also the entire team," said Walchhofer, who can now add Bormio to a list of 10 World Cup victories that includes Kitzbuehel and Wengen downhills.
"Everyone was nervous, the people were expecting us to win," added the tall Austrian, whose last success was a downhill in Kitzbuehel in January.
"I was lucky too. To win by one hundredth of a second you need to be lucky."
Cuche, leader of the World Cup downhill standings but looking for his first win in two years after recovering from a knee injury, could at least take some consolation in his third successive second place in downhill. "I have to keep smiling," he told reporters.
Kathrin Zettel led an Austrian sweep of the top three places in a women's Alpine skiing World Cup giant slalom on Thursday.
The 20-year-old, in second place and 0.21 seconds adrift of compatriot Marlies Schild after the first run, held her nerve to put in a strong second leg and clock a combined winning time of two minutes 09.50 seconds.
Nicole Hosp was second in 2:09.60 with Schild, winner of all three slalom races so far this season as well as a super-combined, third in 2:09.66 after making two big mistakes in her second run down the Hirschenkogel piste.
Zettel has now won both this season's giant slaloms to date.