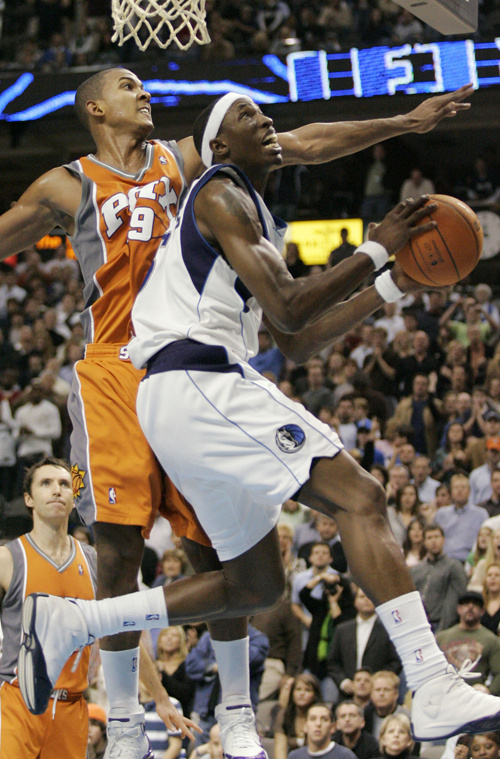 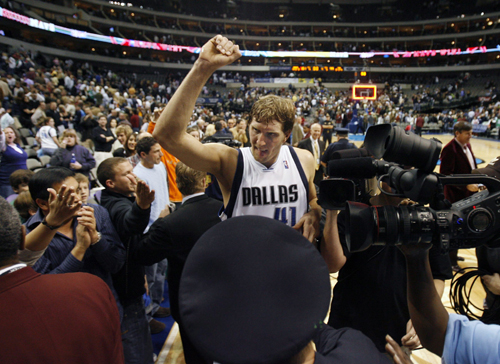 The latest installment of Mavericks-Suns came down to what everyone usually expects in possibly the NBA's most exciting rivalry.
A last shot.
Dirk Nowitzki made his and Amare Stoudemire missed, and with that the Mavs claimed a thrilling 101-99 comeback victory Thursday night at American Airlines Center.
"Really great basketball game," Mavs coach Avery Johnson said. "Two heavyweight teams going at it."
The Mavs (22-7) won their eighth in a row and are 2-0 against the Suns this season. Unlike the previous meeting November 9, when both were bringing up the rear in the standings, last season's Western Conference finalists were back atop their respective divisions.
"You could have called it then," Phoenix guard Steve Nash said. "You would imagine both teams would have fought out of that, and here we are."
The teams traded punches Thursday. No lead was safe for either side, changing hands seven times, including four in the fourth quarter.
The Mavs, owners of the best record in the NBA, seemed to be cruising, riding a Jason Terry shooting spree to a 13-point edge midway through the third quarter. The Pacific Division-leading Suns (19-8) erased that in a blur of dunks and 3-pointers, going up nine (89-80) three minutes into the fourth period
With the game tied at 97-97, Terry rifled a Nash-like pass from 35 feet out to Howard under the basket. Howard (16 points and 12 rebounds) converted on a double-clutch reverse for a two-point edge with 22.8 seconds left.
Playing the two-man game, Nash hit Shawn Marion for a driving layup with 6.3 seconds remaining to tie it again. The Mavs called timeout to set up a play from halfcourt.
Although Terry had a season-high 35 points - his only other 30-point game was also against the Suns - Nowitzki was going to get the ball with a chance to win it.
"He was the only option," Johnson said. "We didn't have a Plan B."
They didn't need one. Terry shipped the ball over to Nowitzki, who was guarded by Marion right of the free-throw circle.
Before he could be double-teamed, Nowitzki took a step back and drained a 19-footer with 1.3 on the clock. Stoudemire's desperation shot at the buzzer bounced harmlessly off the rim.
"I heard my number called," said Nowitzki, who scored 27 and grabbed 10 rebounds. "Earlier my jump shot really didn't feel great. I wanted to quick-shoot it as soon as I got it. I didn't really hesitate and it went up. I'm just happy it went in."
Even with Nowitzki's heroics, Johnson made sure to single out Terry. If facing two-time MVP Nash wasn't enough motivation, Terry was coming off a four-point game (1-of-7 shooting) Tuesday against Charlotte.
"He just said, `You better show up,' " Terry said of Johnson's pregame challenge. "He said, `You've been on Christmas break an extra day longer than everybody else."
The Mavs went small for long stretches, taking centers Erick Dampier and DeSagana Diop out of the game to combat Phoenix's speed. Devean George played all but 22 seconds in the fourth period, teaming with Nowitzki and Howard on the front line.
Howard used his four-inch height advantage and length to guard Nash at times. The Mavs wanted to give Nash as many looks as possible defensively.
Despite Phoenix shooting 51.4 percent, it was held to fewer than 100 points for only the fifth time this season. The Suns came in averaging 111.8.
In other NBA action Thursday: Dallas 101, Phoenix 99; San Antonio 106, Utah 83; Denver 112, Seattle 98.