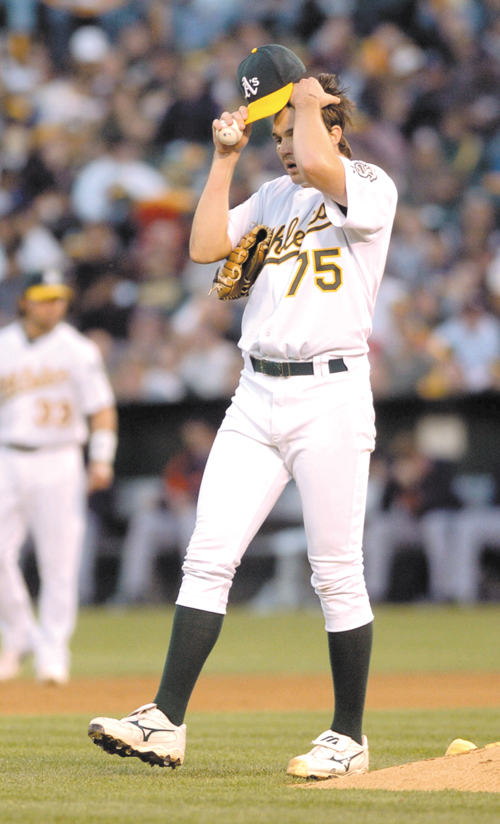 With Barry Bonds poised for his final season in San Francisco, the Giants splurged on a heck of a going-away present.
They lured starting pitcher Barry Zito from across the Bay, landing the A's left-hander with a seven-year, US$126 million free-agent contract that is the most lucrative deal in Giants history.
It is also the richest deal ever given to a pitcher - by any team - but the Giants decided to bust their budget after concluding that Zito is their choice to take over as the face of the franchise when Bonds retires.
Zito, 28, is the age Bonds was when he signed with the Giants in 1992. Zito was 16-10 with a 3.83 ERA last season and made the All-Star team for the third time. In 2002, Zito won the Cy Young Award as the American League's best pitcher.
The Giants are enamored of his track record. Over Zito's first six full seasons in the major leagues - all with the A's - no pitcher has made more starts than his 208 and only Randy Johnson has won more games among left-handers.
Zito has never been on the disabled list, never skipped an assignment because of injury.
His reliability made him a top target of several teams - agent Scott Boras said Wednesday that there were four serious suitors - but the Giants won out with a staggering offer that ranks as the sixth largest in baseball history.
Zito's deal could increase in value to US$137 million, because it includes an US$18 million option for an eighth season, in 2014, with a US$7 million buyout. The option kicks in if Zito pitches 200 innings in 2013, 400 over 2012 and 2013 or 600 innings combined from 2011-13.
The massive contract prompted accusations that the Giants overpaid. Competing offers, according to mlb.com, included US$84 million over six years from the Texas Rangers and US$75 million over five years from the New York Mets.
But two sources within the organization argued that in Zitgo's case, money is not an object. He is the player the Giants wanted, budget be damned.
"If the alternative is not getting him, we'd rather be accused of overspending," the source said.
After committing around US$80 million in payroll in recent seasons, the Giants will push the total to a team record US$95 million in 2007.
In an off-season of rampant rumors about Zito's future, the Giants managed to keep their aggressive pursuit under the radar. The turning point in negotiations came during a dinner meeting at the Peninsula Hotel in Beverly Hills on December 3, when Magowan, executive vice president Larry Baer, General Manager Brian Sabean and Manager Bruce Bochy met for more than four hours with Zito and Boras.
The Giants made a strong pitch for Zito, but apparently swung him with a frank assessment of the team's recent failed seasons.
"The Giants meeting was very, very impressive," Boras said late Wednesday. "They were right on in talking about the things that were important to Barry the passion, the commitment, their strengths.
"And their ability to be candid about their weaknesses gave them credibility. The Giants people separated themselves and, in the end, it allowed Barry to see the flavor of the organization."
Geography was also a factor. The Southern California native wanted to stay close to his parents. Zito is fond the Bay Area and the feeling is mutual. Upon arriving in Oakland in 2000, he became a fan favorite because of his hip persona - Zito surfs, plays guitar and does extensive charity work.
He is the type of mentor the Giants want for their young pitchers. After reaching an agreement with the Giants, he asked for the team phone list so he could introduce himself to the rest of the staff.
Zito has a career record of 102-63 with a 3.55 ERA. He will be the No.1 starter for the Giants, topping a rotation that will also include Lowry, Matt Cain and Matt Morris.
"It's obviously a huge piece of the puzzle as far as solidifying our rotation," Lowry said. "We have a couple No.1 pitchers now, in my opinion. I think if Matt Cain opened the season as the No.1, that would put pressure on him that he didn't need. This is a huge move to help him."
The previous record for a pitcher was the eight-year, US$121 million deal Mike Hampton signed with the Colorado Rockies before the 2001 season. Hampton has since fizzled because of injuries and ineffectiveness.
The Giants, though, see Zito as the closest thing in baseball to a sure thing. His work ethic reminds them of a young Bonds, and his pitching style - crafty rather than overpowering - evokes comparisons to Greg Maddux and Tom Glavine, who have remained effective into their early 40s.