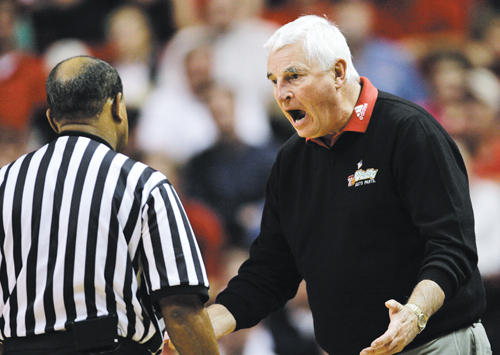 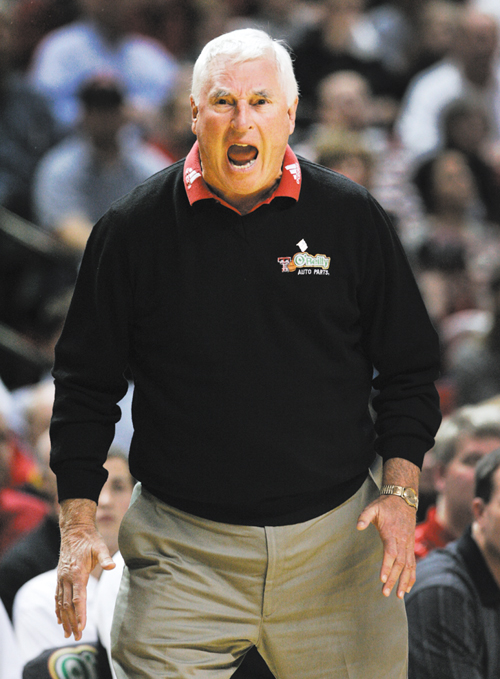 The garish plaid sports coat was replaced long ago by a snug-fitting sweater. The jet-black hair is gone, too, replaced by a thick shock of white.
Even his name has changed - from Bobby to Bob - in the 41 seasons he has ruled the sideline, barking at officials and demanding his players flawlessly execute his offense.
Through all of the change, though, one thing has remained constant: Bob Knight's passion for basketball.
Ultimately, that's what drives him. Passion is the reason he can downplay the fact he's on the verge of achieving one of the greatest accomplishments in college sports, surpassing Dean Smith and becoming college basketball's all-time leader with 880 wins. Texas Tech didn't get Knight the record Thursday night at United Spirit Arena, losing to UNLV, 74-66, but it will happen soon.
The record, Knight insists, will never be about him. Knight says it'll be about the kids at Army. And Indiana. And Texas Tech. Those are the players who have made him one of the most successful coaches in the game's history. After all, he has never scored a bucket or dished an assist in any of his 1,233 games.
But it's not just about the stars, such as Isiah Thomas, Steve Alford - who made the trip to Lubbock - and Quinn Buckner. For Knight, it has always been about every player on his teams and his quest to make them better basketball players. No matter your views on Knight's old-school approach and tactics, you can't question his love for the game.
And isn't that really what life is all about?
The reality is that we're here but for an instant. So if you can find something during your lifetime that brings joy and gives you a reason to celebrate the start of each new day, then consider yourself blessed.
Knight, 66, found it a long time ago on a basketball court. Why else would he be coaching one year past the age he could be drawing social security?
Knight has an undefeated season. He's won three national championships. He's won every conceivable award and been honored every possible way. He has more money than he can spend and loves hunting and fishing.
There are other things he could do, but it's his zest for coaching that gives his life meaning. He still enjoys practice, where he can help players improve just by showing them how to come off a screen a little tighter or make a pass with a better angle.
Hours before Tech's game against UNLV, Knight had his players on the court. Then they'd leave for a quick film session. Then back on the court before another film session. Knight still enjoys the feeling he gets when a player such as Martin Zeno comes free on a back screen, as he did in the opening minutes Thursday night, and scores on an uncontested layup.
Too many times, however, his passion for basketball combined with his quest for perfection sends him over the edge, and a dark side emerges. His friends and supporters - at times I've labeled them enablers - say they can give you a thousand examples of the good things Knight has done. That's fine, but they don't undo the bad things.
That's why he's ending his illustrious career in West Texas, where football still rules, instead of a basketball-crazed state such as Indiana. Think about this: The university essentially gave away a four-pack of game tickets for the occasions Knight might break the record to ensure a full house.
Do you think that would've happened at Indiana? Or Kansas? Or Kentucky? Of course not. But Knight's desire to follow only the rules he puts in place is why he's coaching at Texas Tech.
It frustrates him, but he remains committed to Tech. He signed a three-year extension before the season and is contractually obligated to Tech through 2012, when his son, Pat, is supposed to take over the program. For the record, Knight says he has no idea how long he'll coach.
Maybe, he'll never retire. Perhaps he'll simply coach until the day his heart gives out.