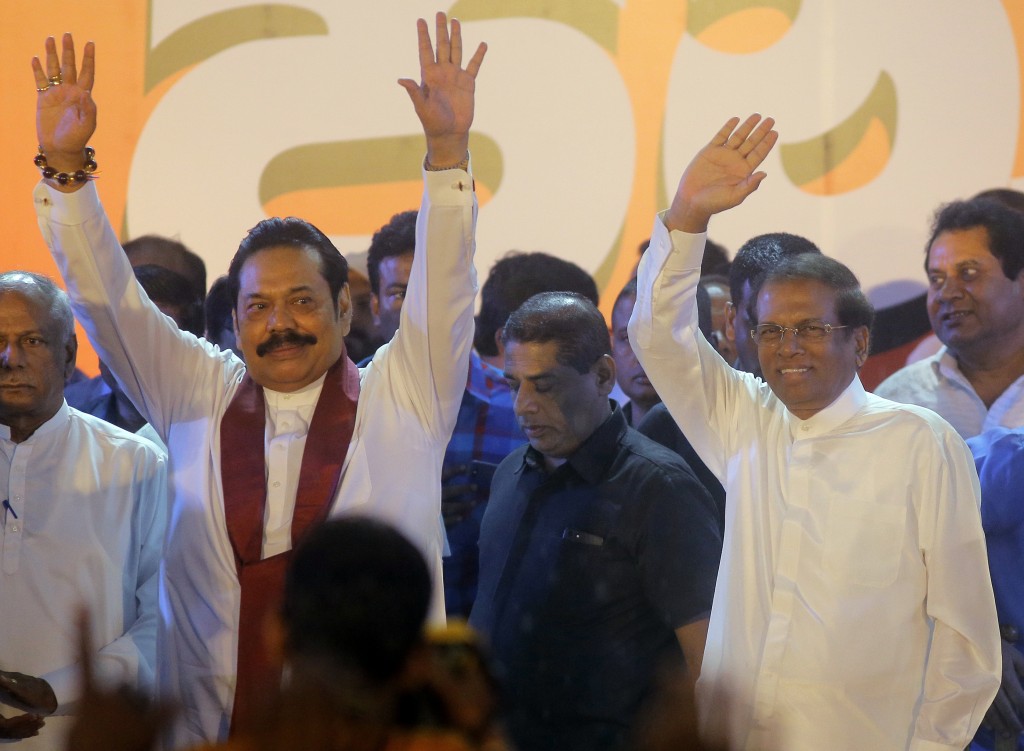 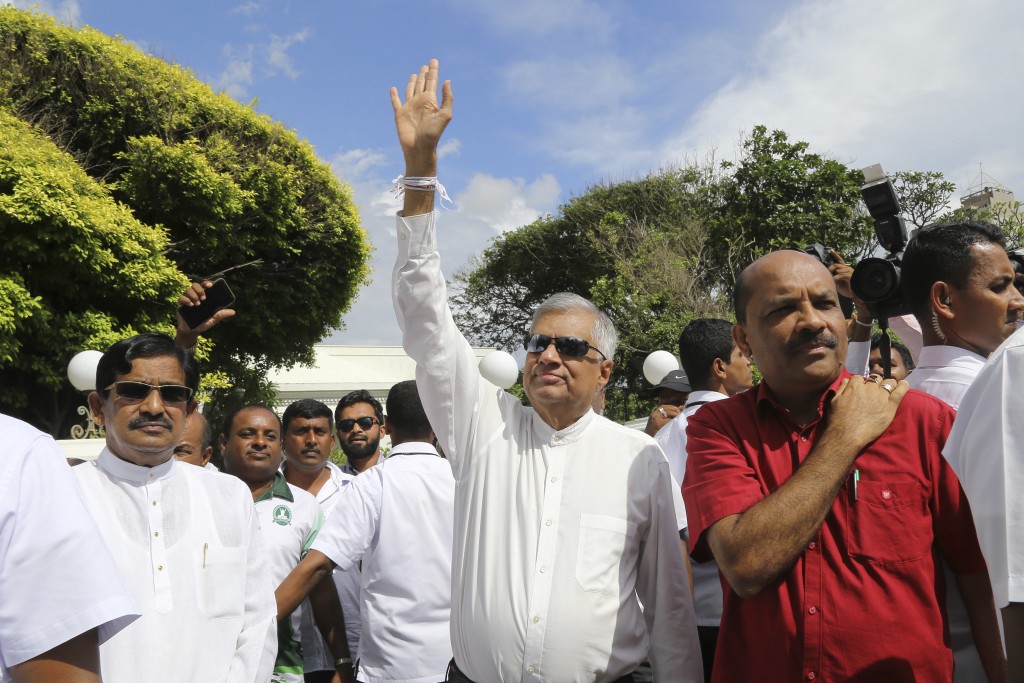 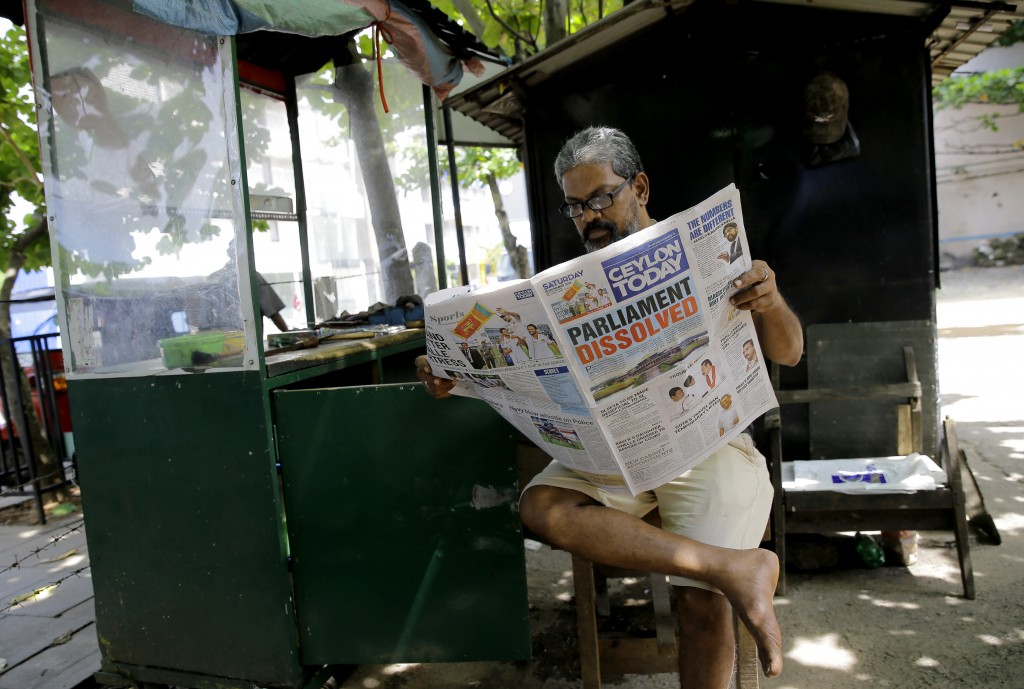 NEW DELHI (AP) — Sri Lankan is in the midst of a political crisis set off by the president's decisions to remove the South Asian island nation's prime minister, dissolve Parliament and call snap elections.

The moves have triggered public protests and international criticism, including from some of the country's biggest donors.

A look at the key players and moments in the ongoing saga:

Sirisena and Wickremesinghe are ideological opponents who formed a coalition to defeat Rajapaksa in 2015 elections. Rajapaksa, who was president from 2005 to 2015, is considered a hero by some in Sri Lanka's ethnic Sinhalese majority because he oversaw the end of a 25-year civil war by crushing ethnic minority Tamil rebels in 2009.

But his time in power was marred by allegations of war-time atrocities, corruption and nepotism.

Tensions had been building between Sirisena and Wickremesinghe for some time, as the president did not approve of economic reforms introduced by the prime minister.

Wickremesinghe's government came under fire last year after handing over operations of a port to a Chinese company in a 99-year lease that the previous government had built in Rajapaksa's home district with Chinese loans. Rajapaksa described the deal to his left-leaning supporters as a bid by Wickremesinghe to privatize national assets. Wickremesinghe said in an interview with The Associated Press that the deal helped the country avoid defaulting on debts accumulated during Rajapaksa's presidency.

Sirisena has accused Wickremesinghe and another Cabinet member of plotting to assassinate him, a charge that Wickremesinghe has repeatedly denied and that so far has not led to any arrests.

On Oct. 26, the alliance between Sirisena and Wickremesinghe formally fell apart, with Sirisena naming Rajapaksa the new prime minister and suspending Parliament.

After a week of upheaval, Sirisena announced he was dissolving Parliament and calling snap elections due on Jan. 5. He later explained in a nationally televised address that he dissolved Parliament out of fear that lawmakers would come to blows over his Oct. 26 decision.

REFUSING TO STAND DOWN

Wickremesinghe has been holed up in the prime minister's official residence in Colombo — surrounded by a skeleton security crew, supporters and Buddhist monks — since he was ousted and maintains he is the country's rightful leader. He has repeatedly called for Parliament to be reconvened so that he could prove his majority support among the country's 225 lawmakers.

He alleges that the snap election was called only when it became clear that Rajapaksa had failed to lure enough lawmakers to his side with offers of cash and jobs and would lose any confidence vote in Parliament.

There is debate over whether Sirisena's Oct. 26 move was legal.

He has cited a general clause in Sri Lanka's Constitution stating that the president has the power to summon or suspend Parliament.

Supreme Court petitioners challenging Sirisena's actions argue that a specific clause in the 19th amendment, added in 2015, stipulates that Parliament can't be dissolved until 4 1/2 years after its election, unless 2/3 of Parliament requests it happen sooner. The current Parliament was elected in August 2015.

Sirisena and Rajapaksa formed a Cabinet of party loyalists and government defectors within days of the Oct. 26 shakeup. They quickly cut fuel prices, a popular measure among those who blamed the Wickremesinghe-led government for Sri Lanka's sluggish economy.

Sirisena and Rajapaksa responded by organizing a massive rally on Nov. 5, with politicians from their party bringing busloads of constituents into Colombo. Police estimated at least 120,000 attended.

The U.S. has said that Sirisena's decision to dissolve Parliament "poses a vital threat to Sri Lanka's democratic institutions." Colombo-based diplomats from Australia, the U.K. and the European Union also issued statements calling for the country's constitution and democracy to be respected.

U.N. Secretary-General Antonio Guterres has offered to moderate discussions between Rajapaksa and Wickremesinghe. On Sunday, he urged the government to respect "democratic processes and institutions."

China and India have been careful not to take an overt position in Sri Lanka, which has been a battleground in their struggle for geopolitical supremacy in South Asia.

Petitioners asked the Supreme Court on Monday to declare Sirisena's decrees null and void. That decision could come as early as Tuesday.

Both Rajapaksa and Sirisena have said they will face the Jan. 5 election together.

Sirisena suggested on Sunday that he could have Wickremesinghe forcibly removed from the prime minister's residence.