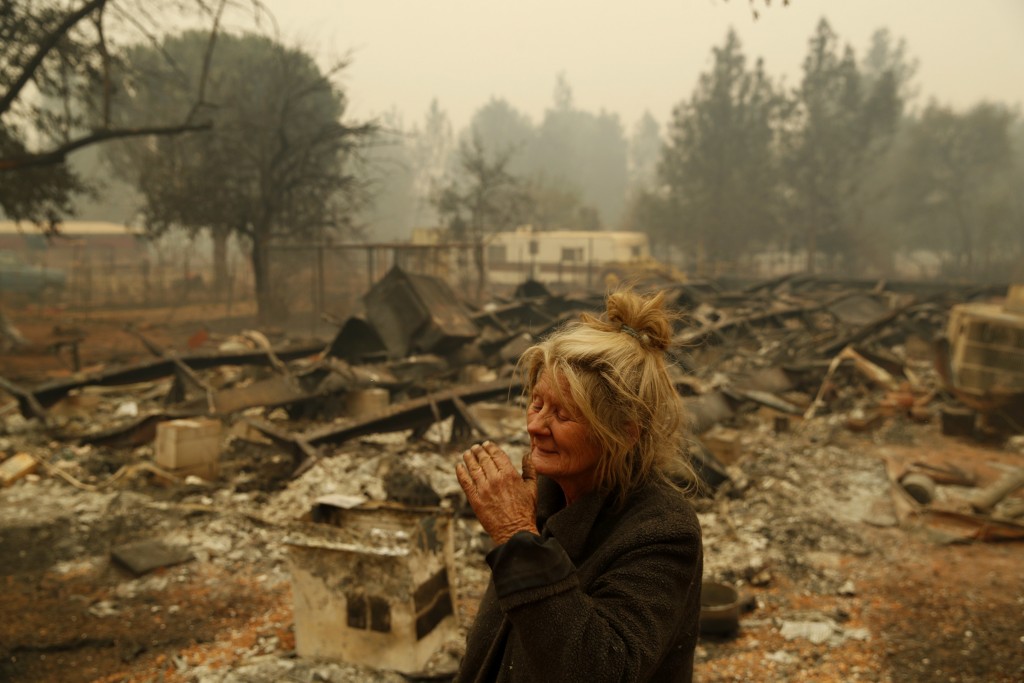 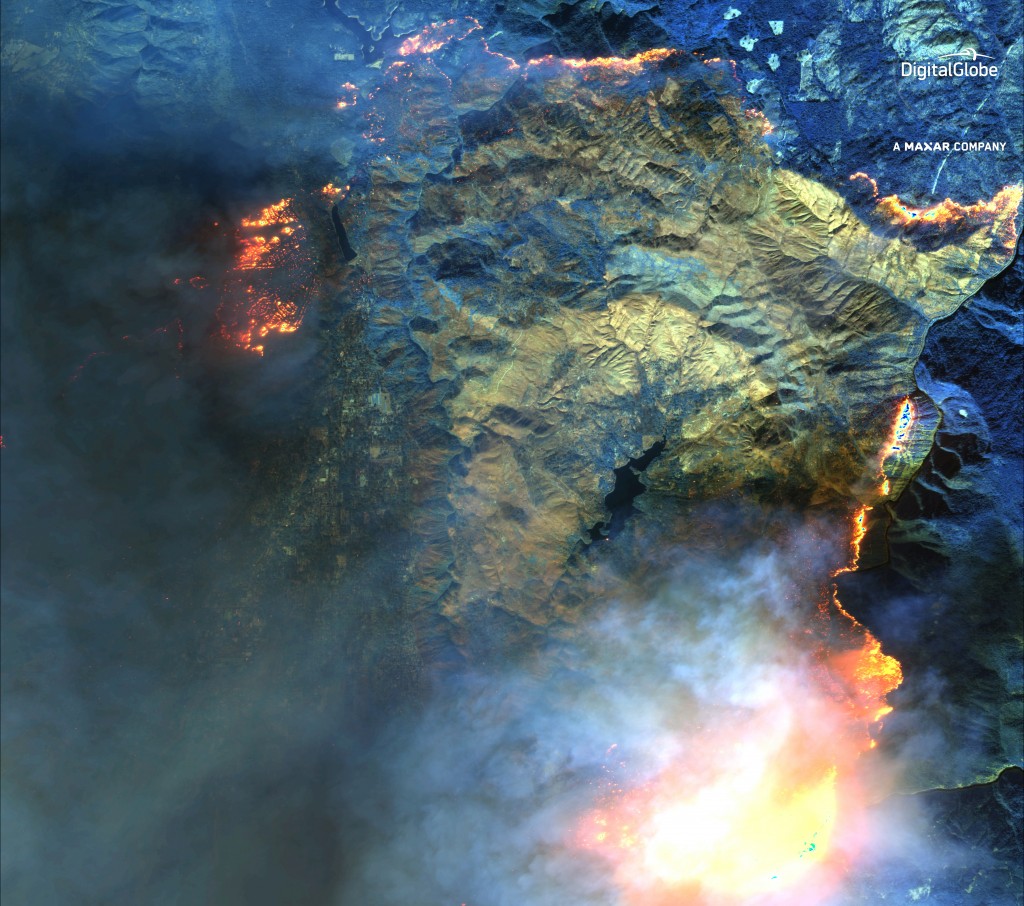 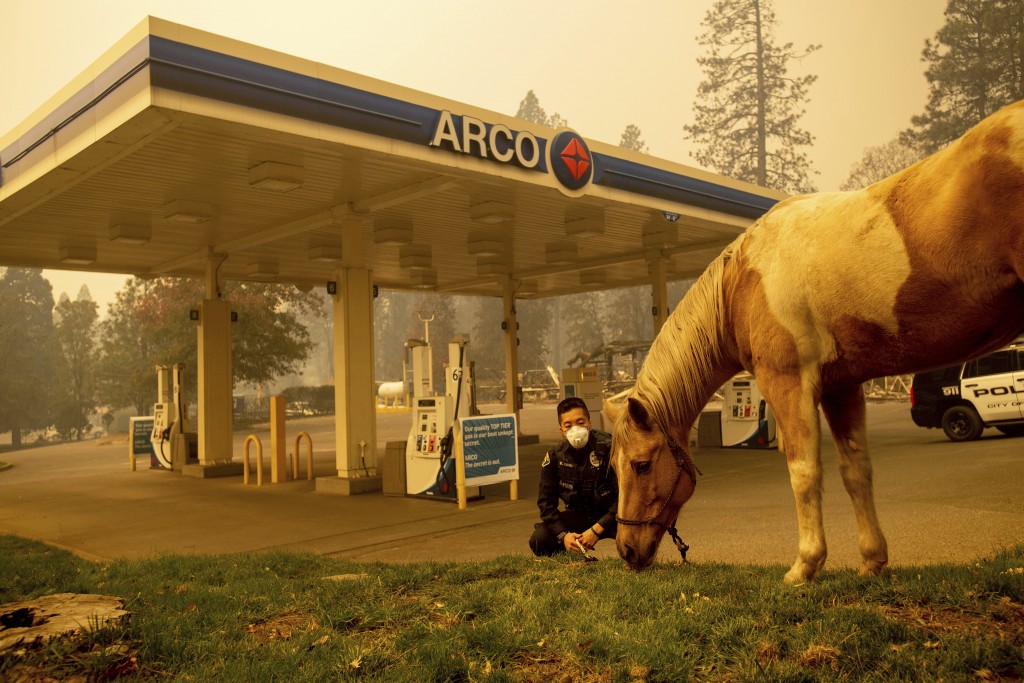 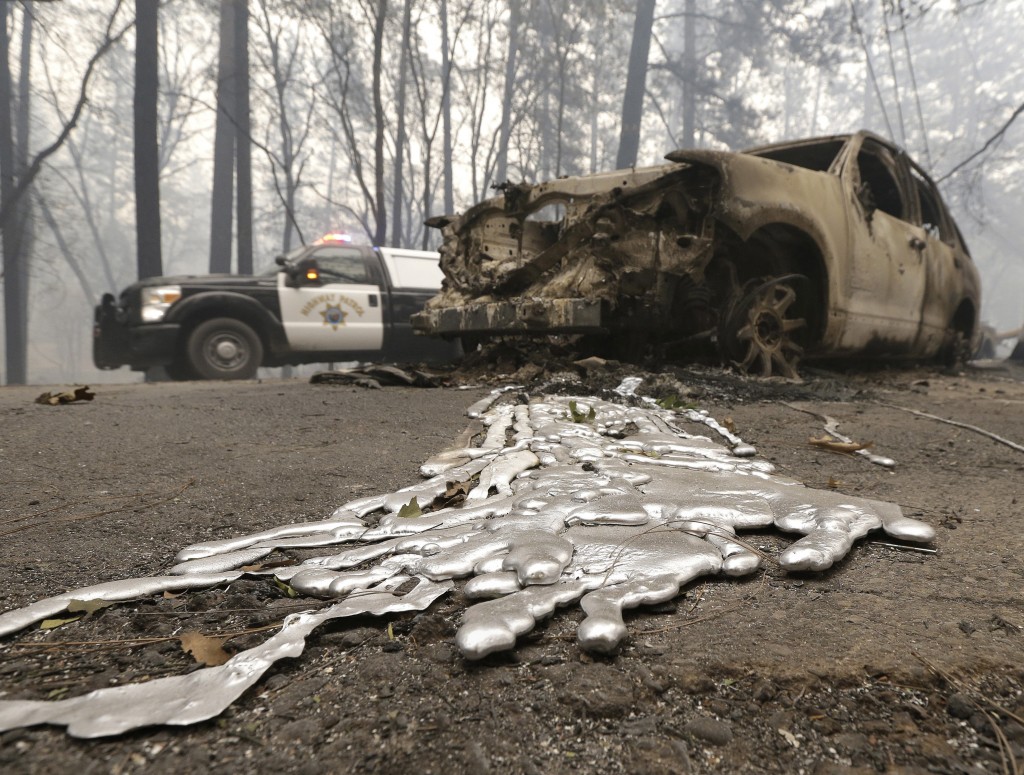 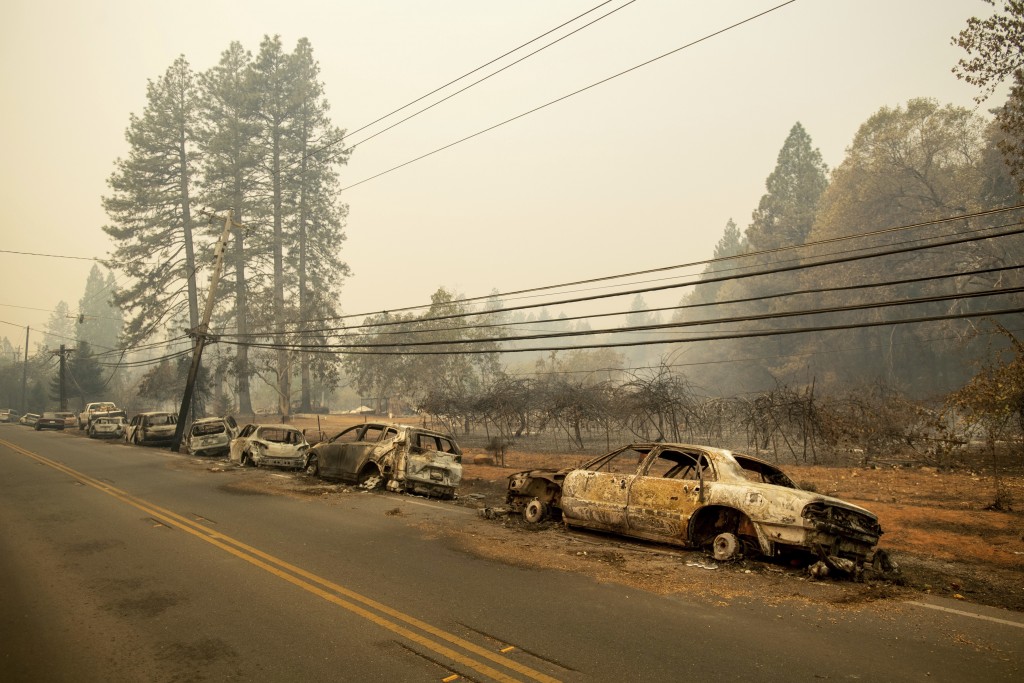 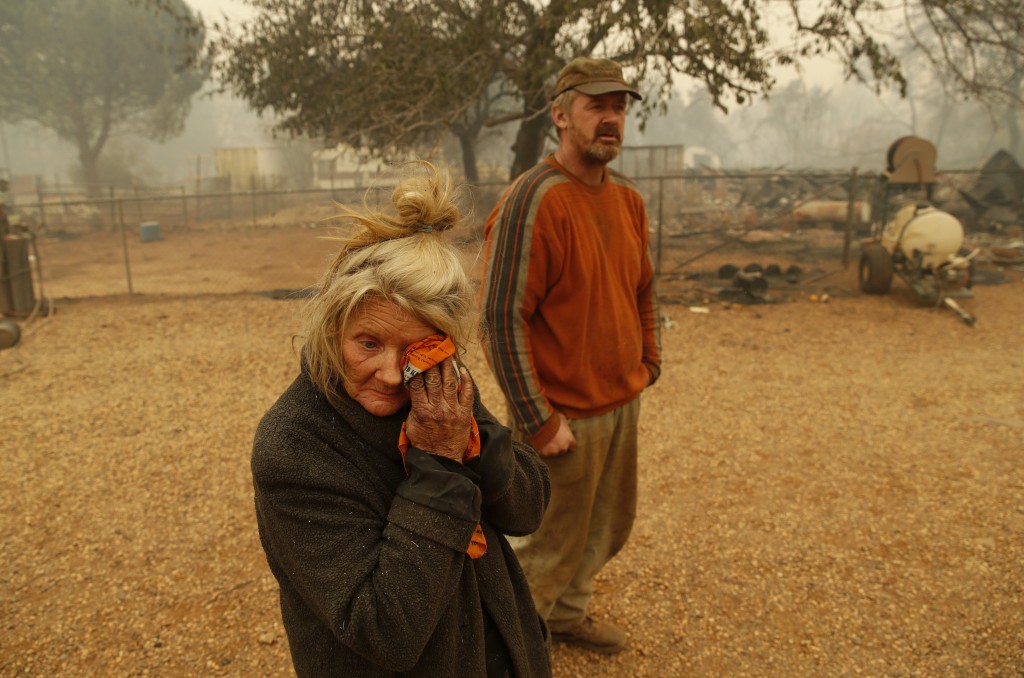 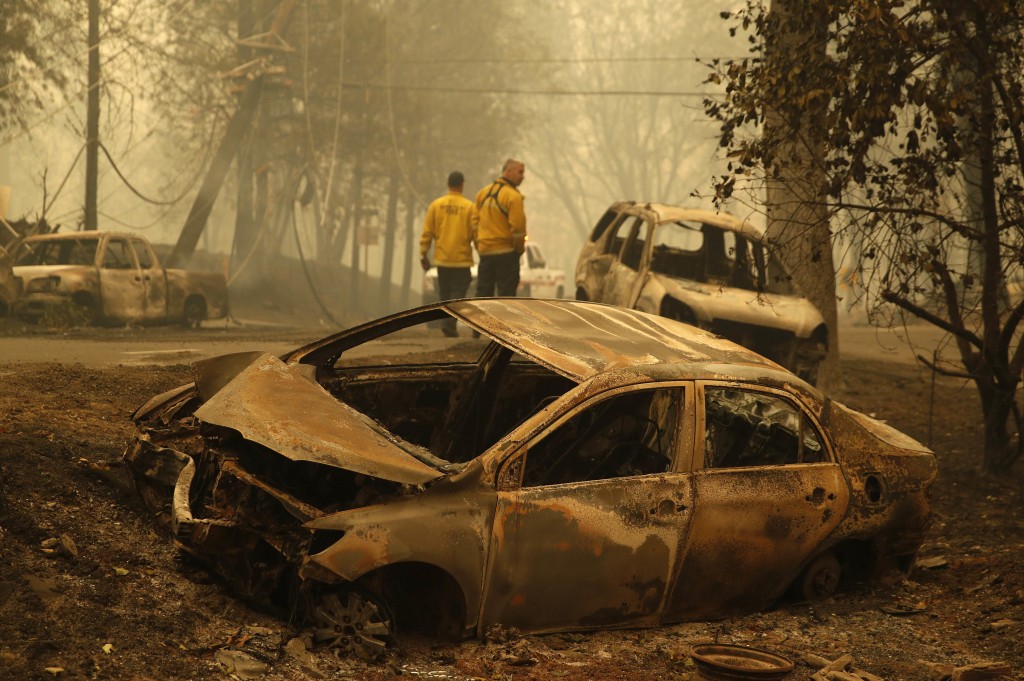 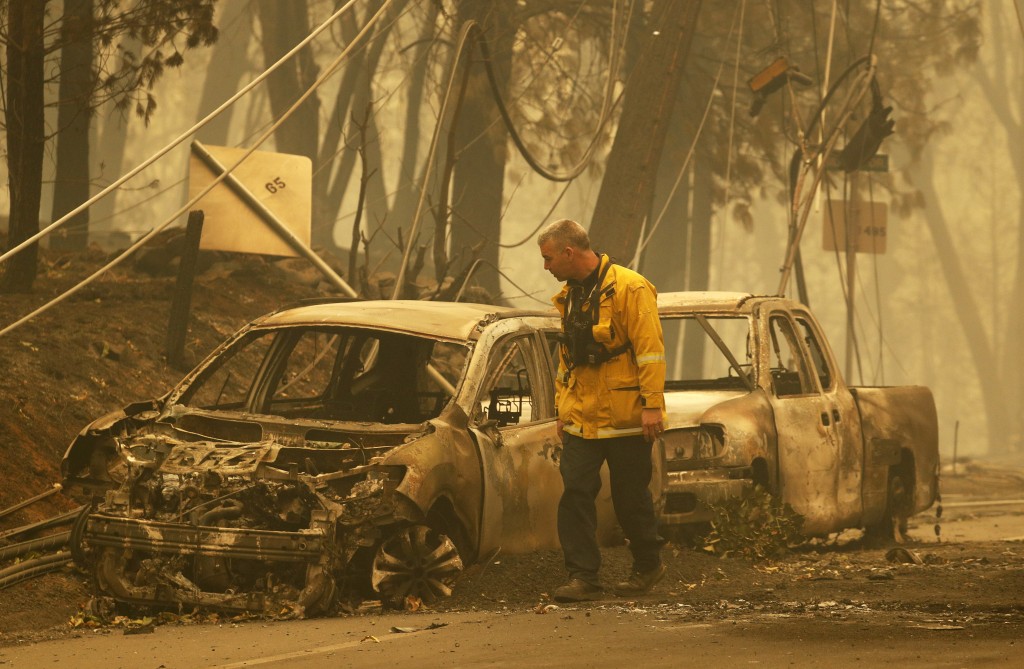 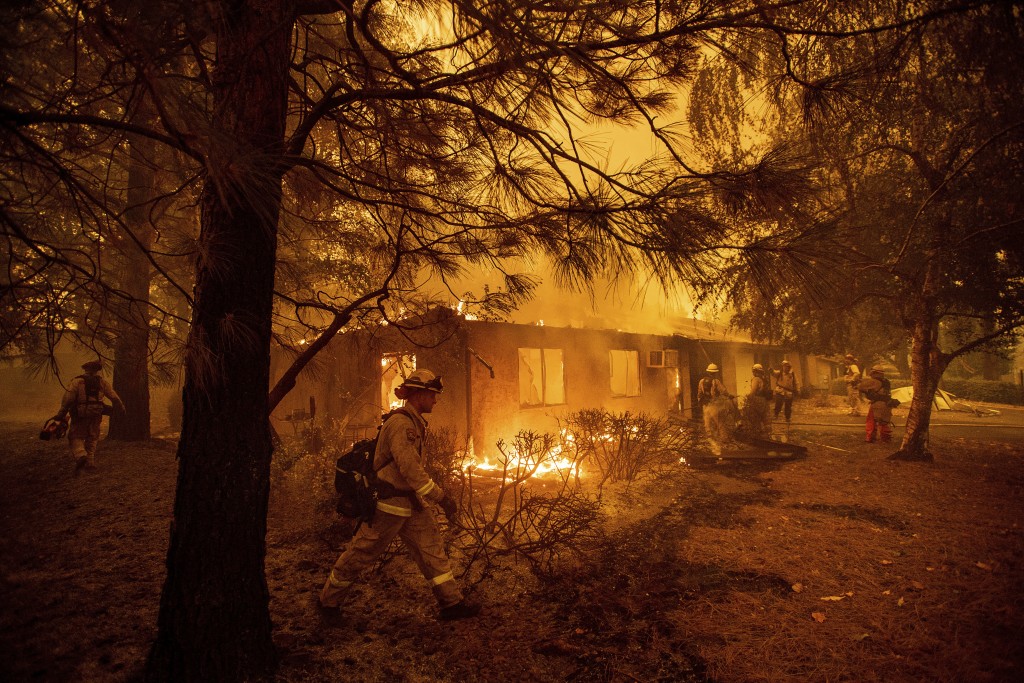 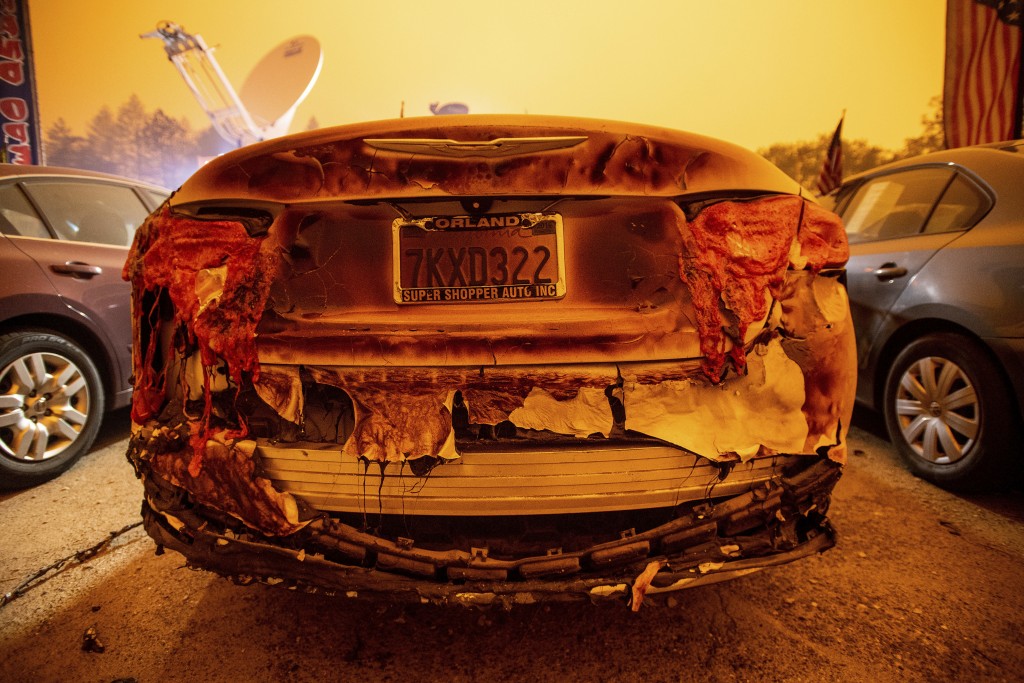 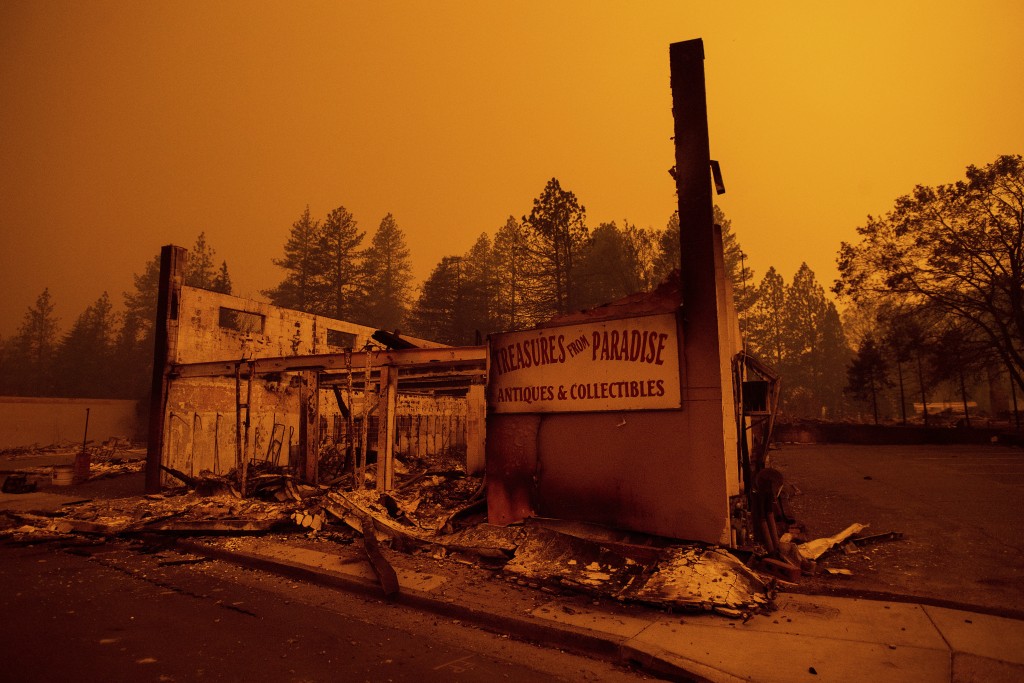 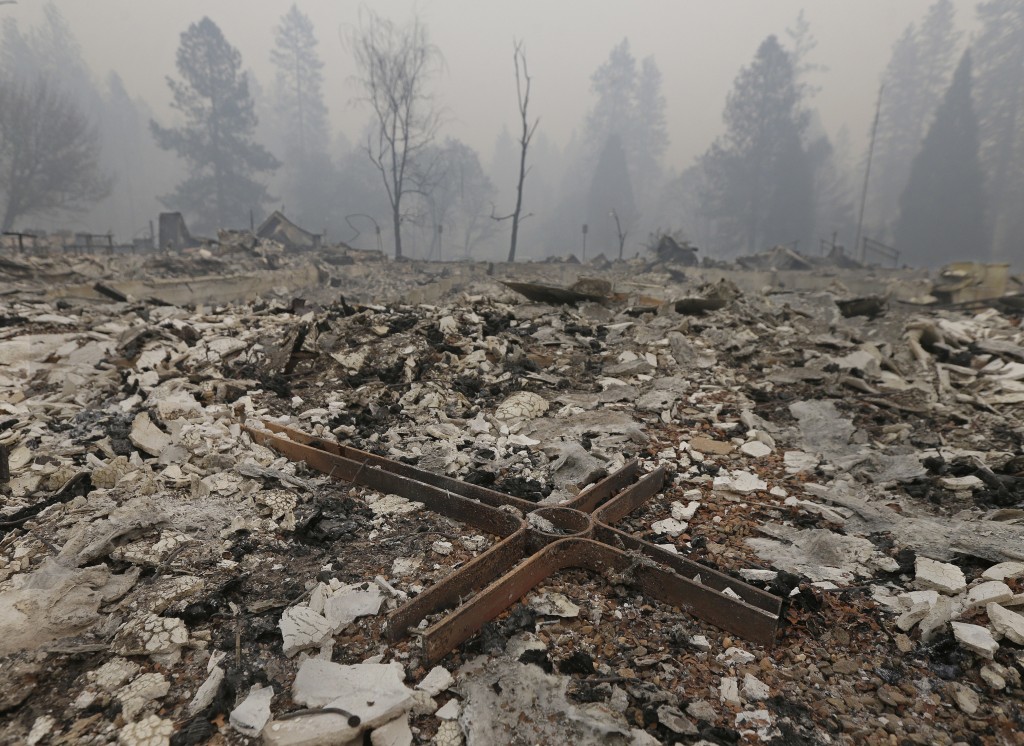 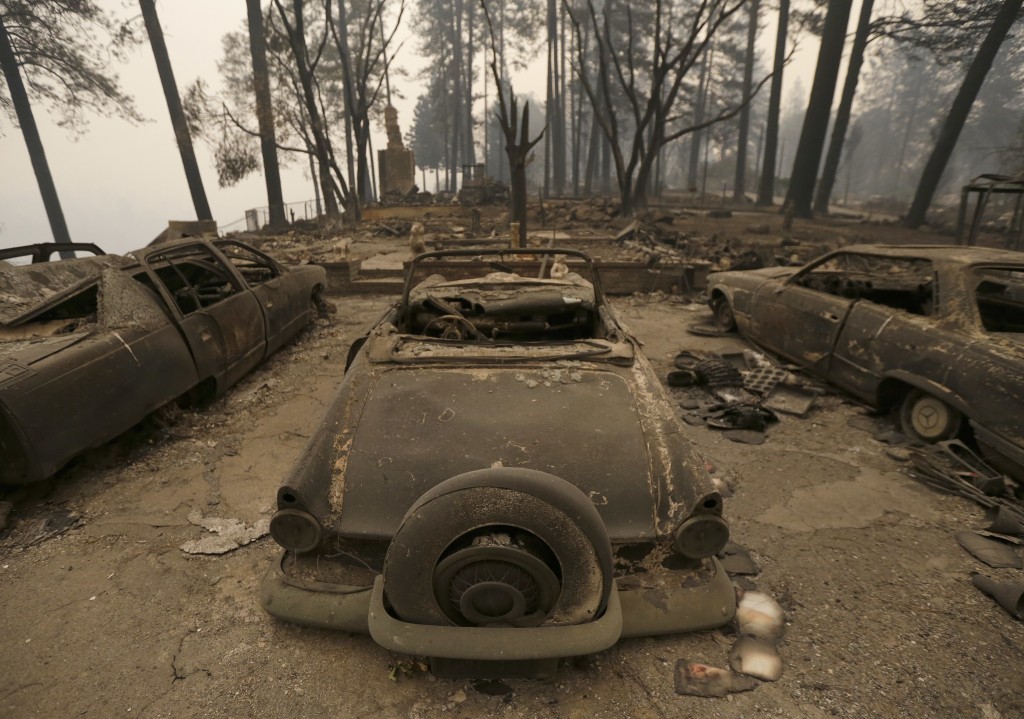 PARADISE, Calif. (AP) — Not a single resident of Paradise — population 27,000 — could be seen anywhere in town Friday, the day after most of them fled the burning Northern California community that may be lost forever. Abandoned, charred vehicles cluttered the main thoroughfare, evidence of the panicked evacuation a day earlier.

Most of its buildings are in ruin. Entire neighborhoods are leveled. The business district is destroyed. In a single day, this Sierra Nevada foothill town founded in the 1800s was largely incinerated by flames that moved so fast there was nothing firefighters could do.

Only a day after it began, the blaze that started outside the hilly town of Paradise had grown to nearly 140 square miles (362 square kilometers) and destroyed more than 6,700 structures, almost all of them homes, making it California's most destructive wildfire since record-keeping began.

Nine people have been found dead, some inside their cars and others outside vehicles or homes after a desperate evacuation that Butte County Sheriff Kory Honea called "the worst-case scenario." Their identities were not yet known.

"It is what we feared for a long time," Honea said, noting there was no time to knock on residents' doors one-by-one.

With fires also burning in Southern California, state officials put the total number of people forced from their homes at more than 200,000. Evacuation orders included the entire city of Malibu, which is home to 13,000, among them some of Hollywood's biggest stars.

The fire in Paradise, about 180 miles (290 kilometers) northeast of San Francisco, was still burning out of control Friday.

A thick, yellow haze hung in the air, giving the appearance of twilight in the middle of the day. Some of the "majestic oaks" the town boasts of on its website still have fires burning in their trunks. Thick wooden posts holding up guardrails continued to burn.

Thursday morning's evacuation order set off a desperate exodus in which many frantic motorists got stuck in gridlocked traffic. Many abandoned their vehicles to flee on foot as the flames bore down on all sides.

"The fire was so close I could feel it in my car through rolled up windows," said Rita Miller, who fled Paradise with her disabled mother.

The town, situated on a ridge between two valleys, was a popular retirement community, raising concerns of elderly and immobile residents who have been reported missing.

On the outskirts of town, Patrick Knuthson, a fourth-generation resident, said only two of the 22 homes that once stood on his street are still there — his and a neighbor's.

"I lost my home in 2008, and it's something you can't really describe until you go through it," said Knuthson, who battled flames eight feet or taller as strong winds whipped hot embers around him. He worked so long in the flames and smoke that he needed to use oxygen Thursday night at his home, but he refused to leave.

On Friday, Knuthson was covered from head to toe in black soot. His tiny town will never be the same, he said. The bucolic country landscape dotted with bay and oak trees will take years to recover.

In the town's central shopping area, there was little left but rubble.

St. Nicolas Church still stands, a rare exception. The nearby New Life church is gone. An unblemished Burger King sign rises above a pile of charred rubble. The metal patio tables are the only recognizable things under Mama Celeste's pizzeria sign. Only blackened debris remains behind the Happy Garden Chinese Restaurant sign touting its sushi. Seven burned out Mercedes chassis are all that's left of Ernst Mercedes Specialist lot.

City Hall survived. But the Moose Lodge and Chamber of Commerce buildings didn't.

The town's 100-bed hospital is still standing, but two of its smaller buildings, including an outpatient clinic, are flattened. The Adventist Feather River Hospital evacuated its 60 patients in a frantic rush when the evacuation order came Thursday morning. Some were forced back by clogged roads, but all of them eventually made it out, some in dramatic fashion.

On the outskirts of Paradise, Krystin Harvey lost her mobile home. She described a town rich with historical charm, until a day ago.

"It was an old country town. It had the old buildings lined up along the walkway," she said. "Almost all businesses were locally owned and included an assortment of antique shops, thrift stores, small restaurants, two bars and lots of churches."

Harvey wondered if the town's traditions would survive. The town was famous for the discovery of a 54-pound gold nugget in the 1800s, which eventually prompted a festival known as Gold Nugget Days. The highlight of the festival is a parade that features a Gold Nugget Queen.

"My daughter's going out for the gold nugget queen this year," said Harvey, then she paused. "Well, it's been going for 100 years, but we don't know — there's no town now."

People in Paradise, like so many in California, have become accustomed to wildfires, and many said they were well prepared. They kept their gutters clean, some kept pumps in their swimming pools and had fire hoses. But the ferocity and speed of this blaze overwhelmed those preparations.

Drought, warmer weather attributed to climate change and home construction deeper into forests have led to more destructive wildfire seasons that have been starting earlier and lasting longer.

Just 100 miles north of Paradise, the sixth most destructive wildfire in California history hit in July and August and was also one of the earliest. Called the Carr Fire, near Redding, it killed eight people, burned about 1,100 homes and consumed 358 square miles (927 square kilometers) before it was contained.

"Our llamas," she said. "Somehow they made it through."

Schuster said they stopped trying to hook up a trailer for the animals and fled their home and property with just their three cats on Thursday when the day turned pitch black as fire roared in.

"It's Paradise," she said. "It's always been Paradise, and we will bring it back."