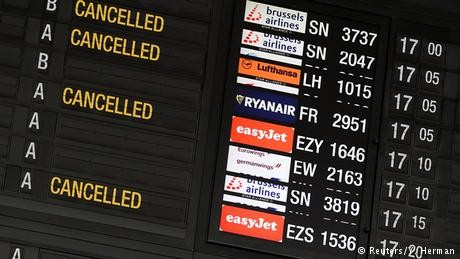 According to a new report released by the European Court of Auditors, airlines in Europe do not have to inform passengers the real reason for a delay, often giving people on the same flight different excuses depending on their persistence to get compensation.

These findings from the Luxembourg-based watchdog are among others were uncovered when it probed 11 airlines in 10 EU states and surveyed thousands of people.

"They can inform different reasons to different people," the Court told reporters in Brussels on Wednesday. It noted some good practices applied in other non-EU countries which, if applied in Europe, may enhance EU passenger rights.

By comparison, the United States offers over €1,100 for delays. New Zealand grants up to 10 times the cost of a ticket. In Canada, someone traveling with a severely disabled person does not have to purchase an additional ticket, unlike in the EU.

Researchers found that airlines often told people who complained that a delay was due to circumstances beyond their (the airlines) control. However when this line of reasoning was properly challenged, they were more likely to pay compensation.

Read more: EU passengers can claim compensation for flight delays outside the bloc

Most people in Europe are not aware of their rights and don't bother asking for compensation because they believe they will not get a positive response, said the report.

The issue has played into the hands of carriers, and created a new side business in Europe for so-called claim agencies.

Researchers noted that the high number of claims in Spain was due, in part, to the large number of chartered flights.

They also found that people who complain the most about a delayed flight are also more likely to get compensation.

However once that compensation is given to one passenger, the carrier will not inform anyone else.

The court told the European Commission to introduce a new rule that would require carriers to make payments to all passengers automatically, regardless if they had asked, if the flight was delayed for reasons that require compensation.

On paper, the EU has rules that are supposed to protect people's rights when it comes to air travel, but also on trains, buses and ferries.

However the lack of transparency, and a lax implementation of the rules, combined with vague language in EU regulations, when it comes to things like assistance, are quite problematic.

The Court recommended improving the coherence, clarity and effectiveness of the passenger rights framework; increasing passenger awareness; further empowering the National Enforcement Bodies (NEBs) and enhancing the mandate of the Commission.