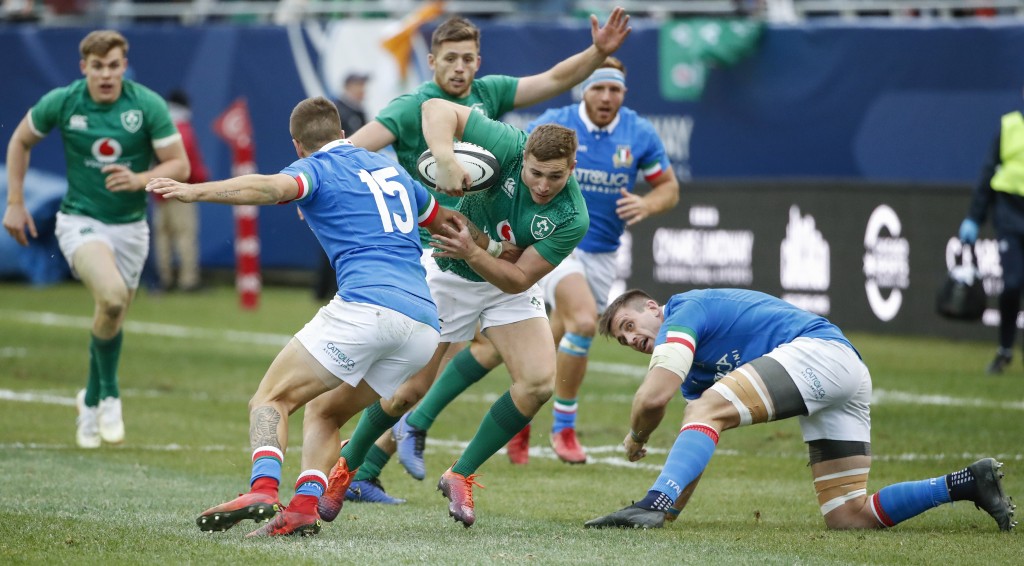 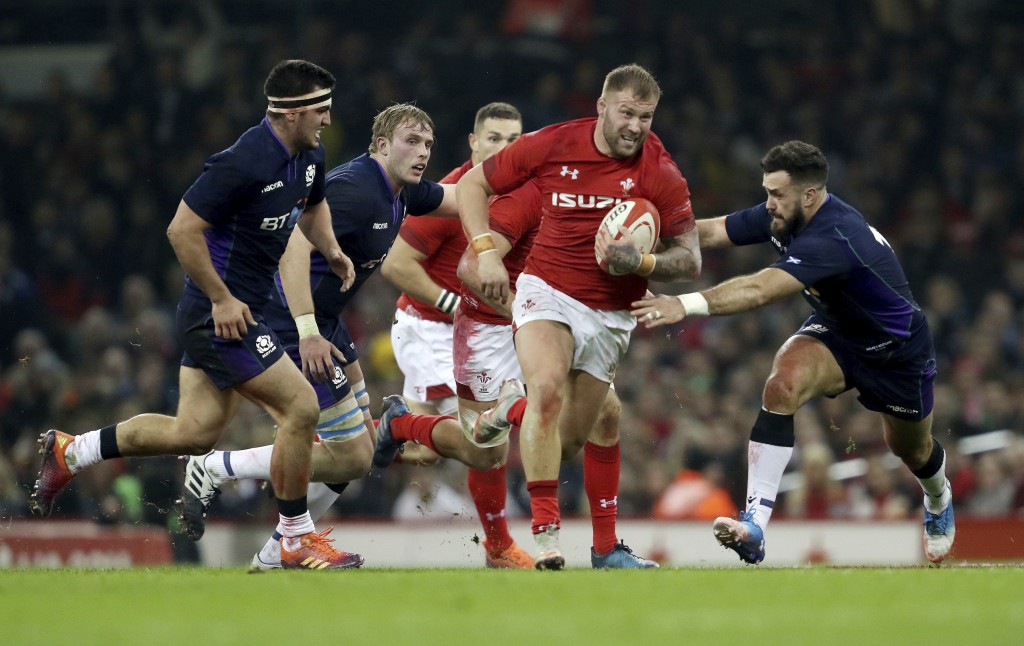 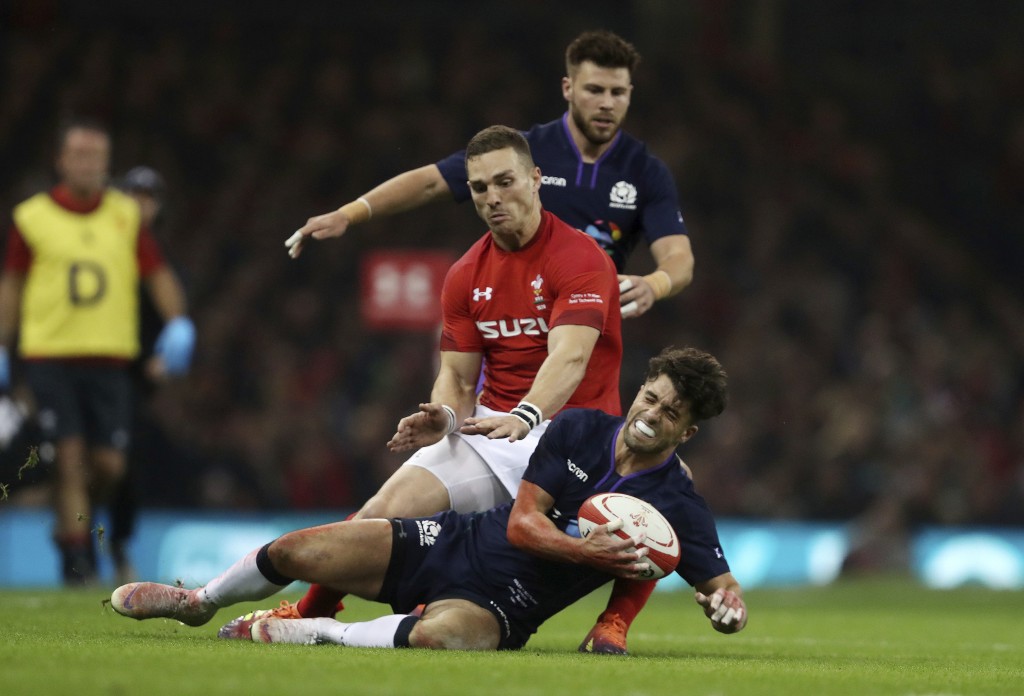 The test rugby window has reopened after five months and teams have reinforced.

Fullback Stuart Hogg has completed a remarkable recovery from ankle surgery seven weeks ago to start for Scotland, and Samu Kerevi's return for Australia has forced Israel Folau to move back to the wing. The gifted Folau has also started at fullback and center this year.

British Lions backs Dan Biggar and Liam Williams can make only the reserves for Wales, and Argentina is starting usual lock Guido Petti as an openside flanker for the first time in his 43 tests.

The teams are named and here's a look at the major matches on Saturday:

It took only a few training sessions with Heyneke Meyer for Yoann Maestri to realise what France is sorely lacking.

The lock, who wins his 63rd cap against South Africa, was instantly struck by the former Springboks coach's methods at Stade Francais.

"We're missing all of that, the intensity in training is incomparable. It's a question of how you work and your vision of rugby," Maestri said this week. "South Africa, but also Argentina, Ireland, have an intensity in their preparation which means that, during matches, they do things far more easily and quickly. They're able to resist under pressure far more comfortably."

Over the years, France has at times started games well — even against world champion New Zealand in June — but has usually finished them poorly.

France lost three Six Nations matches out of five. All those defeats were by six points or less, the team cracking near the end of matches.

Then, in June, France caused the All Blacks considerable problems in the first half, before capitulating too easily. Overall, in three tests, Les Tricolores conceded 127 points despite spells of highly competitive rugby.

"When I see the tries we score, a lot of teams can't do that. But paradoxically there are lots of basics we're not doing right," France captain Guilhem Guiardo said this week in an interview with sports daily L'Equipe. "We're not able to master the most simple things, the most efficient things. That's what we're trying to fix. At the highest level, concentration has to be maximal."

Third-ranked Wales has won six straight tests for the first time since 2012.

Sixth-ranked Australia has lost seven of its 10 tests this year.

Wales start as favorite, and yet history tells us the Wallabies should be.

Australia has won its last 13 tests against Wales stretching back to 2008, when a late Stephen Jones penalty helped the Welsh prevail 21-18.

Eight of the 13 have been in Cardiff, and in four of those matches the Australians' winning margin has been six points or fewer.

The Welsh specialize in gallant defeats against Australia and they're tired of it. It's the last chance to get the Wallabies off their backs before their Rugby World Cup pool match in Tokyo next year.

"This will definitely be important from a confidence point of view," Wales coach Warren Gatland said.

Wales delivered on expectations against Scotland last weekend, and Gatland was keen to see how his bolstered team handled the pressure of being expected to put down their bogey side. As Gatland noted, all Wallabies teams, no matter how bad they appear, are competitive.

"This is as good as I have seen us come to Europe in terms of conditioning in the last few years," Cheika said. "We are pretty hungry after an indifferent season."

Wales lock and captain Alun Wyn Jones is the only survivor from either side from that 2008 match.

Rob Kearney has been the undisputed Ireland fullback for a decade. Reliable and fearless, Kearney has amassed 86 caps. He's got a sore shoulder, trained on Thursday, and could have played Argentina at a pinch. But he missed out, and Irish fans weren't disappointed.

Because Jordan Larmour got another start, his first at Lansdowne Road. After six appearances as a utility replacement since his debut in February, Larmour made his first start last weekend against a second-string Italy and thrilled. He left Italians clutching at air and beat others for pace as he scored three tries from fullback and left wing.

Coach Joe Schmidt was excited that Larmour keeps improving, but cautioned that the Italians' tackling wasn't great, and Argentina's will be much better.

"That versatility, that enthusiasm, he's a ball of energy from back there," Schmidt said. "That gets other people energized, and hopefully he can maintain that throughout the game."

The 21-year-old Larmour is up for World Rugby breakthrough player of the year. His teammates aren't surprised.

"He's a freak," scrumhalf Luke McGrath said. "It's scary to think how young he is and the potential he could fulfil.

"He carries that threat that if you do kick poorly to him he will run it back and make yards. He can step off both feet which is a huge talent. He puts any one-on-one defenders in trouble."

Leinster and Ireland teammate Garry Ringrose praised Larmour for working hard in training and off the pitch, asking questions, and staying grounded.

However, Larmour did show some bravado when asked about possibly facing New Zealand next week.

"Looking to the All Blacks, no one is scared of them, no one is afraid of them. They are a quality team, so are we," he told the42 website. "We just need to turn up on the day and we can turn them over."

Stuart Hogg is supposed to be at home, elevating his ankle. Or in a gym, working out the kinks, getting the ankle right.

The British Lions fullback had surgery on it seven weeks ago. The doctors said he would be out for up to 12 weeks, taking him into December. He'd miss these November tests for Scotland.

But he'll be running out in blue at Murrayfield on Saturday, ready as can be for whatever Fiji can throw at him.

Coach Gregor Townsend insists giving Hogg his first rugby action since September in a test is not a risk.

"Stuart has trained for two weeks now. He trained with his club and recorded some excellent speed times. He has trained fully with us all week so he looks good to go.

"We had experience last year when he came back from two injuries and played in Champions Cup games, played very well, and then two weeks later he played test level.

"So, yeah, we could have kept him back a week or a few weeks, but he's still going to be going into a test match.

"Having watched him in training, we've seen he is ready to go."

Hogg's return is a boost to a side which struggled to break Wales' defense last weekend and lost in Cardiff.

While Fiji play the kind of game Hogg relishes, it will still be uncompromising and a test of his fitness.

As Townsend said, "We've got to counter every one of their players, this is a team that plays the game unlike any other in world rugby.

"They'll move the game from their own 22, you'll have players offloading in contact — sometimes once they're on the floor the ball will suddenly come out from a ruck and go 10 meters, especially when Leone Nakarawa has got his hand on the ball — so it is a huge challenge for us defensively."

Fiji won their last matchup, nearly 18 months ago, in Suva.

New Zealand and Australia are coming this month but it is this match against Georgia that is considered the biggest one of them all by the Italians.

Two teams with major chips on their shoulders.

Georgia sits just above Italy in the world rankings, and the Lelos have won the Rugby Europe Championship — the Six Nations B — in nine of the last 11 years.

Meanwhile, Italy has competed in the Six Nations 19 times, and taken the wooden spoon 13 times.

Six Nations organizers remain satisfied with the status quo, with Italy's greater resources, but that hasn't stopped the clamor growing for the Lelos to replace the Azzurri in an expanded Seven Nations or via promotion-relegation.

The Italians want to shut down the noise.

"We know that they have been waiting for this match for a year," Italy coach Conor O'Shea said. "I'm not so stupid as to ignore everything that is behind the match. But, for us, our future is Saturday, it's this match.

"We have to forget the debate about the Six Nations and think that international rugby needs these kind of matches ... you can't think just about the four or five teams that can win the World Cup. Georgia is coming from years of great work, but we have to think about our path."

O'Shea has been overseeing progress from the clubs up, but not fast enough to many. And he won't have his greatest asset, captain Sergio Parisse, who is out with a calf injury. Abraham Steyn replaces Parisse at No. 8, and hooker Leonardo Ghiraldini takes over the captain's armband.