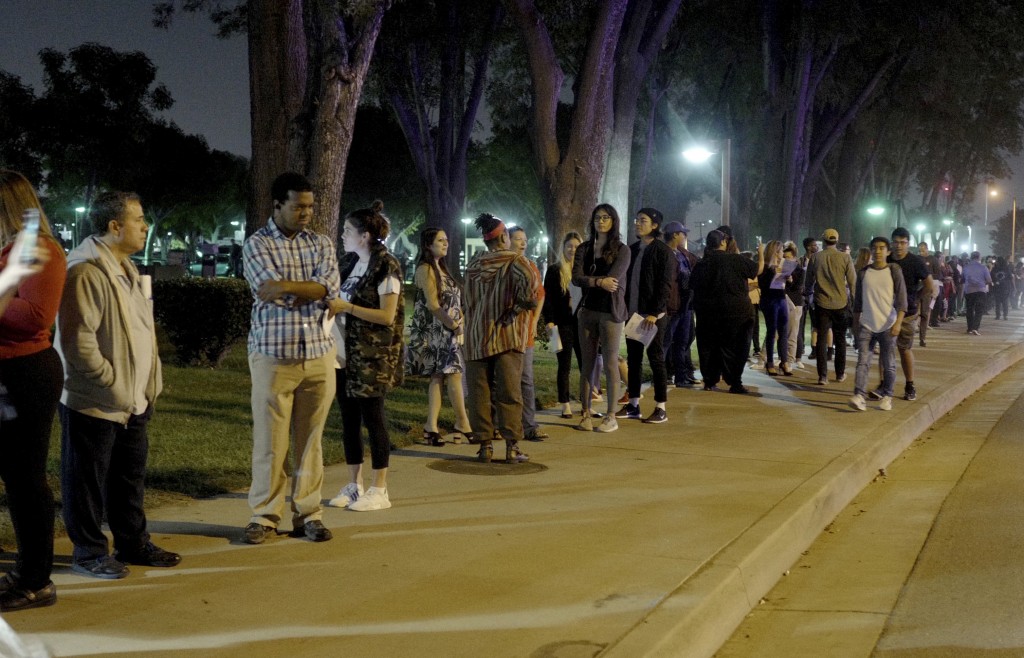 WASHINGTON (AP) — President Donald Trump has inspired outrage, love, fear and every emotion in between. He has also inspired record-breaking turnout at the ballot box.

With votes still being counted, an estimated 113 million Americans cast ballots in the first nationwide election of the Trump presidency, according to data compiled by The Associated Press. That's 30 million more people who participated in the 2014 midterms, representing the highest raw vote total for a non-presidential election in U.S. history and the highest overall voter participation rate in a midterm election in a half century.

Democrats' blue wave was real. But so was a corresponding surge in Republican enthusiasm that allowed the president's party to counter the Democrats' new House majority with big wins in top contests for the Senate and governorships this week.

"This election was about both Democrats and Republicans showing up," said Michael McDonald, a University of Florida political science professor who tracks voter turnout the United States Elections Project.

Indeed, voter participation rates approached presidential levels in some states as even the most optimistic voting experts and political operatives underestimated Trump's ability to drive voter turnout on both sides.

Democrats seized the House majority by flipping at least 28 seats nationwide. They could claim as many as 35 new seats once all the votes are counted, which could take weeks in some cases.

Analyzing 417 House races that featured at least two candidates on the ballot, The AP has determined that Democrats earned more than 51.4 million votes in competitive House races nationwide, or 52 percent, compared to 47.2 million votes cast, or 48 percent, for Republicans.

But both parties exceeded turnout expectations.

Voting experts noted that turnout exploded in states with big-ticket elections such as Florida, which featured high-profile races for Senate and governor, and those states with lower-profile contests such as North Carolina, which featured only judicial races on the statewide ballot. Voter participation rates jumped by around 10 points in both states.

In battleground Ohio, voting was up 42 percent compared to the 2014 midterm election. In Hamilton County, which includes Cincinnati, turnout exceeded any midterm election over the last 30 years.

The trend was similar in battleground Florida, where voting increased 33 percent over 2014. And in Texas, where Democratic superstar Beto O'Rourke narrowly lost his bid to unseat Republican Sen. Ted Cruz, voting was up an astounding 92 percent as roughly 8.2 million people voted in 2018 compared to 4.7 million four years earlier.

Even with the surge, Republicans won the highest-profile races in all three states. The losses in governors races in Ohio and Florida were particularly concerning to Democrats given those states' significance in presidential elections.

"I thought It was very close to complete victory," Trump said in a testy press conference Wednesday, suggesting that losing the House would improve his political fate.

Democrats seized on their overall advantage in the popular vote, which showed their candidates across the nation earning millions more votes than the GOP.

"Bottom line, Donald Trump lost the popular vote by 2 points in 2016 and he's on track to lose it by 9 in 2018," said Jesse Ferguson, former executive director of the Democrats House campaign arm. "We saw an uptick in Democratic enthusiasm and turnout, an uptick in first-time voters, an uptick in new registrants, and this electorate was more diverse and a little younger than typical midterm elections."

Indeed, outside groups that pumped hundreds of millions of dollars into the midterm season to engage young people and minorities cited evidence that their strategy worked, even while admitting disappointment about losing big races — none bigger than the Florida governorship.

Youth turnout, as defined by voters between 18 and 29, surged to a number not seen in a midterm election in a quarter century. Overall, 31 percent of eligible young people cast ballots, according to an analysis by the Center for Information and Research on Civil Learning and Engagement at Tufts University.

In 2014, only an estimated 21 percent of young voters turned out.

But because of a surge in turnout among other demographics, it's unclear whether young people had outsized impact.

Florida voters between the ages of 18 and 29 made up 12 percent of those who cast ballots, according to VoteCast, a wide-ranging survey of the electorate conducted by The Associated Press. Sixty percent of those young voters backed losing candidate Andrew Gillum, who would have been the state's first African American governor.

Young voters nationwide also made up 12 percent of the electorate, with 6 in 10 backing Democrats.

The data left little doubt as to what caused the surge in enthusiasm. Nearly two-thirds of voters said Trump was a reason for their vote, according to VoteCast.

"There were Democrats who would have crawled over broken glass to vote against Republicans because of Trump," Wolfson added. "And in the last week, he certainly motivated some base Trump voters to come out enthusiastically themselves."

Turnout broke records for midterm elections in Midwestern battlegrounds such as Wisconsin and Iowa, though with conflicting results.

"There were big disappointments clearly, but there were lots of great wins," said Page Gardner, founder and president of the Voter Participation Center, which works to boost turnout among underrepresented groups. "These people helped create finally a divided government — and a check on the president."