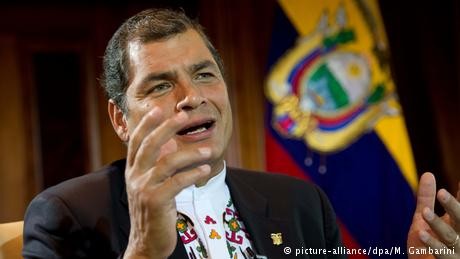 Former Ecuadorian President Rafael Correa requested asylum in Belgium in an apparent bid to avoid extradition, according to judicial sources on Thursday.

The request comes a day after an Ecuadorian judge opened a criminal trial against Correa for his suspected involvement in a botched kidnapping of an opposition lawmaker in 2012.

What is the case about?

The former lawmaker Fernando Baldo, a Correa ally who turned critic, was kidnapped in Bogota in 2012. But shortly afterward, Colombian police released him, saying Ecuador's intelligence agency Senain was behind it. The agency reports directly to the presidency.

The Ecuadoran judiciary claims it has sufficient evidence to prosecute and obtain convictions of the defendants. The two police officers were put into a witness protection program after they declared Correa had ordered the kidnapping.

Read more: Ecuador: The end of the 'Citizens' Revolution'?

The trial was suspended shortly after it opened. According to Ecuadoran law, Correa cannot be tried in absentia.

The case is likely to remain suspended indefinitely until the former president returns to his home country or the trial is closed by judges.