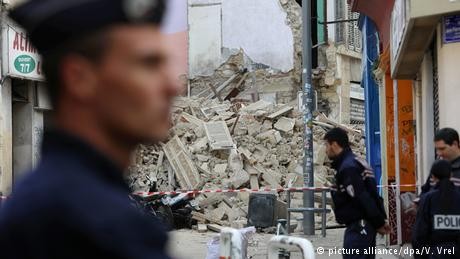 Authorities believe one person may still be trapped under the rubble. The chances of finding survivors "are thin, very thin, but real," said Charles-Henri Garie, who leads the water brigades of the Marseille fire department.

Gaudin is under pressure to resign after the buildings collapsed on Monday. "Some people are taking advantage of this in opposition to society's interests," Gaudin said.

Earlier this week, French Interior Minister Christophe Castaner said at least 6,000 properties had been identified as "at risk" in Marseille. He said they comprised 44,000 lodgings mostly in lower-class neighborhoods. Castaner described the situation as "unacceptable."

But Gaudin was defiant, saying he would not heed calls to jump ship in the wave of the tragic incident.

He said since 2005, €35 million ($40 million) had been allocated to renovating or demolishing social housing blocks. "Do you think a ship captain quits during a storm?" Gaundin asked.

But politicians and residents continued to decry the situation, saying officials needed to be held responsible.

"Everybody knew about the problems with the two collapsed buildings," Patrick Lacoste, a spokesman for a local housing action group, told France 24. "People died for nothing, even though we knew."

Jean-Luc Melenchon, a local left wing lawmaker and former presidential candidate, said it was "the homes of the poor that are falling down, and that's not a coincidence."