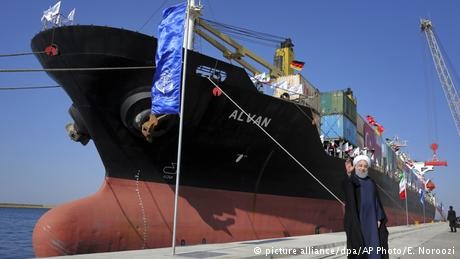 US officials said Tuesday that the Indian-backed Chabahar port, located on the Gulf of Oman in southern Iran, could continue operations and development in an exemption from the latest round of US sanctions.

The port connects India to Afghanistan and other Central Asian countries, bypassing India's rival Pakistan. A US State Department spokesperson said that US President Donald Trump's South Asia strategy "underscores our ongoing support of Afghanistan's economic growth and development, as well as our close partnership with India."

Read more: Iranians feel the pressure of new US sanctions

In 2016, Afghan, Iranian and Indian officials signed a series of agreements that ensured New Delhi's investment in the Chabahar port project. The port, along with an attached railway project, allows Indian goods to reach Afghanistan and Central Asian countries without having to cross the Pakistani border, which is often closed due Islamabad's political tensions with New Delhi and Kabul.

According to his spokesperson, Afghan President Ashraf Ghani worked behind the scenes to ensure that the Chabahar project was not a part of US sanctions on Iran.

"Since the start of discussions over new sanctions on Iran, the Afghan president has personally focused on this issue with utter seriousness and commitment and discussed it through diplomatic channels with US officials," spokesperson Haroon Chakhansori, told DW.

The latest round of talks on the port took place on Sunday during a meeting in Kabul between President Ghani and US Principal Deputy Assistant Secretary for South and Central Asian Affairs, Alice Wells.

However, experts point out that sanctioning the port would not have made a huge impact on Afghanistan's trade with Iran or India because most of the transactions between the countries are made using an unofficial, traditional system of sending money locally referred to as "Hawala."

Using Hawala, business owners do not make transactions with banks. Instead, money is sent through local currency exchange shops. These transactions are not tracked by US financial institutions.

"Afghanistan's trade with Iran did not suffer during previous sanctions, on the contrary, our trade with Tehran increased from $24 million in 2001 to over $2 billion in 2017," Azarakhsh Hafizi, the head of the international relations committee at Afghanistan's Chamber of Commerce and Industries (ACCI), told DW.

"Our trade with Iran increased significantly when the sanctions were in place," he said.

Indian exports through Chabahar to Afghanistan and Central Asian countries cost more in comparison to exports that traverse Pakistan. Kabul-based university lecturer Qais Mohammadi told DW that the US exemption is a symbolic and political gesture.

"Kabul and its allies are sending a signal to Pakistan. If Pakistan does not make it easier for Afghans to conduct trade with India, both countries will find alternative routes – even if they are more expensive," he said.

Pakistan does not currently allow Indian goods to cross its soil to reach Afghanistan. India and Pakistan accuse each another of providing sanctuary to insurgents who, they claim, carry out attacks on the other side of the border.

More importantly, exempting the Chabahar project from new US sanctions highlights the current US government's intention to give India a larger role in Afghanistan – a move that Pakistan has criticized.

Read more: Can Afghanistan step out of Pakistan's shadow?

"We appreciate India's important contributions to stability in Afghanistan, but India conducts billions of dollars in trade with the United States, and we want them to help us more with Afghanistan, especially in the area of economic assistance and development," President Trump said in August 2017 when he announced the US strategy for South Asia.

Since then, the Trump administration has increased pressure on Pakistan by suspending millions of dollars in military aid and granting India more influence in Afghanistan.

While sanctions on Tehran may not have a huge impact on Afghanistan's trade with Iran, the measures take a toll on the almost 1.5 million Afghan refugees currently in Iran. Most of these Afghans have saved years worth of earnings in Iranian currency, which has plummeted in value as a result of US sanctions.

"These people had saved money for years to return to Afghanistan, buy a house and start a life, but the currency they have saved in, lost its value overnight," Azarakhsh Hafizi said.

Read more: Opinion: Iran's options are either sanctions or corruption

The illegal flow of US dollars from Afghanistan to Iran also affects Afghanistan's economy. Many people are believed to buy US currency inside Afghanistan in order to smuggle it to Iran for a profit on favorable exchange rates caused by sanctions. Experts say a big reason behind the drop in value of Afghanistan's currency against US dollars in recent months is the illegal transfer of cash to Iran.