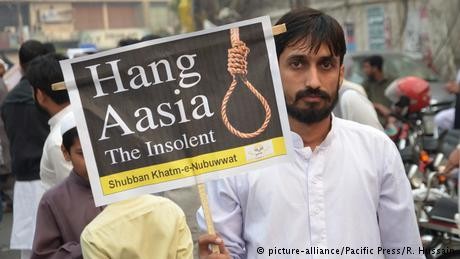 The Pakistani state took nearly ten years away from Asia Bibi. Born in 1971, she has spent the prime of her life in jail. Bibi, an impoverished mother of five, was incarcerated for insulting Islam in 2009, and sentenced to death in 2010.

In Pakistan, it only takes a mere accusation, a slight assertion, to put someone behind bars on blasphemy charges. At last, after a long and arduous legal battle lasting nearly a decade, Pakistan's top court acquitted Bibi on October 31. The verdict was hailed by liberals and rights activists all over the world.

The logical outcome of the Supreme Court's decision would have been Bibi's immediate freedom. But authorities were forced to keep her in prison for over a week. Hardline Islamist groups are demanding her death and they have taken to the streets in protest of the court's ruling.

No blasphemer has the right to live, they chant, while setting cars and shops on fire in many cities. The Tehreek-e-Labbaik (TLP) group says the judges who acquitted Bibi must be killed. They're also urging army officials, who are loyal to the Islamist narrative, to revolt against the incumbent army chief, General Qamar Javed Bajwa.

In spite of this serious challenge to its authority, Pakistan's government has not met the Islamist protesters with an iron fist. Prime Minister Imran Khan's government caved in to extremists, and agreed to take legal measures barring Bibi from traveling abroad.

Pakistani authorities justified their agreement with the TLP, arguing they wanted to avoid more violence on the streets. It's possible they were only buying more time to deal with the situation. On Wednesday evening, news broke that Bibi had finally been released from prison and could potentially soon be taken out of the country to safety.

A failure of law

Bibi's heart-wrenching ordeal has proven that blasphemy remains a sensitive issue in Pakistan and, more importantly, the blasphemy laws in place since the 1980s cannot be challenged.

Opposing these laws, or demanding amendments to them, would be considered sacrilegious in Pakistan. Two prominent politicians were killed in 2011 for supporting Bibi and calling for the blasphemy laws to be reviewed.

While Bibi's acquittal by the Supreme Court was a positive step, the legal foundation on which the judges issued their verdict is problematic. They ruled that Bibi was released due to lack of evidence. The ruling doesn't set a strong legal precedence, as we know how easy it can be to fabricate evidence in countries like Pakistan.

Right now Pakistani lawmakers need to sit together and review the country's controversial Islamic-rooted legal system. I don't expect the state – of which the military is the most powerful component – to change its overall Islamic narrative that breeds extremism in the country. It obviously serves the country's ruling classes to perpetuate animosity towards India, while the Pakistani military gets the lion's share of the country's budget.

But recent events should be a wake up call for Pakistani politicians, generals and the judiciary that legal change – if not a total overhaul of the state – is necessary. If the Pakistani government and judiciary won't undertake these measures, the state could lose its authority in the coming years, and Pakistan would be run by religious extremists from the streets.

The state can't protect itself

However, it looks like the Pakistani state has already lost most of its authority. The fact that Bibi, after being proven innocent by the highest court in the country, could not leave jail lest she be murdered by hardliners, shows Pakistan is on the way to becoming a failed state.

Currently there is speculation that Bibi will soon be taken out of the country, or has already been flown out. But why can't Bibi stay in Pakistan as a free citizen? Why can't she move freely inside her own country? Why is it necessary that she escape to the West? Can Pakistan function like a normal state? I think it is high time that Pakistani authorities, both civilian and military, change the dangerous course they have taken since the 1980s.

The obsession to carve "strategic depth" in Afghanistan to counter regional rival India has emaciated the Pakistani state to an extent that even the country's powerful military establishment has to bow down to jihadist proxies.

Read more: Pakistani minister: Asia Bibi could be barred from leaving the country