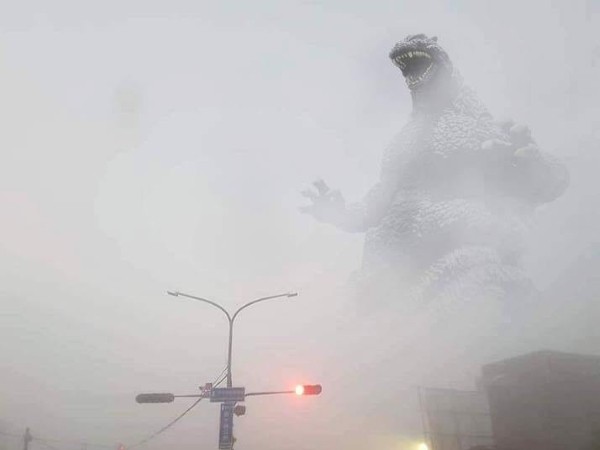 TAIPEI (Taiwan News) -- As frightening levels of pollution plague western Taiwan for a second day in a row, a Taiwanese netizen took a photo of a murky street in the western Taiwan city of Taichung, and seamlessly imposed an image of Godzilla on top.

Western Taiwan continues to be plagued by "unhealthy" air quality for the second straight day with harmful levels of air pollution recorded in 58 weather stations, 22 of which have flashed a red warning, signifying a reading from 151 to 200 on the AQI scale. AQI levels above 150 are considered “unhealthy for everyone,” and members of sensitive groups may experience health effects.

In response, a member of the Facebook group Baofei Commune (爆廢公社公) this morning (Nov. 8) posted this image of Godzilla, the gargantuan monster from a Japanese film franchise by the same name, appearing to emerge in front of a traffic light on a street in Taichung. When posting the image, the netizen wrote, "When will the air in Taichung finally be clean... scared no, no."

The frightening thing about this level of pollution, is that even a behemoth as massive as Godzilla would be shrouded in smog until it was too late to flee. In response, another member of Baofei Commune posted this image of Ultraman battling some sort of giant insect: