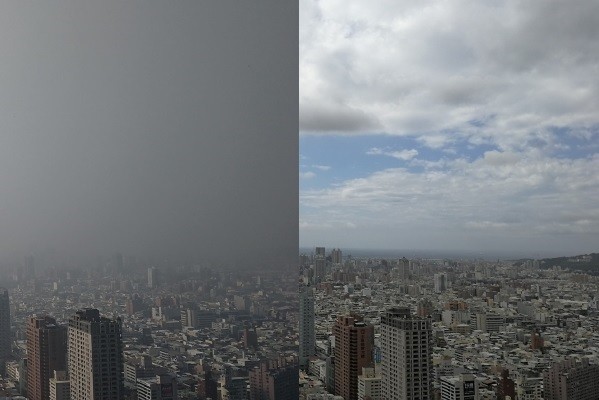 According to the EPA's Air Quality Index (AQI), as of 8 a.m. this morning, there were 58 stations across western Taiwan which reported poor air quality. Among those stations, 22 in northern, central, and southern Taiwan have flashed a red warning, which runs from 151 to 200 on the AQI scale.

AQI levels above 150 are considered “unhealthy for everyone,” and members of sensitive groups may experience health effects. The EPA uses a six-color air pollution warning system, in which a maroon alert is the highest and most severe warning, indicating “hazardous” air quality, and is followed by purple, red, orange, yellow, and green alerts. The EPA said that, due to the influence of easterly winds, many locations along the western half of Taiwan will see thick fog, resulting in poor dispersal conditions in southern and central Taiwan. The EPA has issued a red warning for air quality in central Taiwan, Yunlin, Nantou, Chiayi, Kaohsiung, and Pingtung, while it has issued an orange warning for northern Taiwan and Miaoli.

In addition, at 6 a.m. this morning, because more than a third of the stations in northern Taiwan, Miaoli, and central Taiwan flashed a level 2 warning, the EPA said Taiwan Power Company (Taipower) is reducing production today. It is anticipated that the Taichung, Hsinta, and Hsieh-ho power plants will independently reduce their load and emissions from 7 a.m. to 4 p.m.

The EPA reminds people in the areas reporting level-red pollution that if they experience discomfort such as eye pain, coughing, or a sore throat, they should reduce physical exertion, especially outdoor activities. Patients with heart, respiratory, or cardiovascular disease, along with children and the elderly, should stay indoors and reduce physical exertion. If it is necessary to go outside, it is advisable to wear a protective mask, and people who have asthma may need to increase the frequency of using their inhalers. Although winds carrying smog from China to Taiwan contribute to 30 percent of the nation's air pollution, the remaining 70 percent is from domestic sources such as factories, vehicles, and coal-burning power plants, according to the Taiwan Environmental Information Center. However, based on the latest map of carbon monoxide concentrations by Windy.com, it is quite apparent that a fair share of the air pollution in Taiwan today is coming from China. Windy.com map of carbon monoxide concentrations over China and Taiwan. AirVisual Earth map of AQI levels in China and Taiwan.