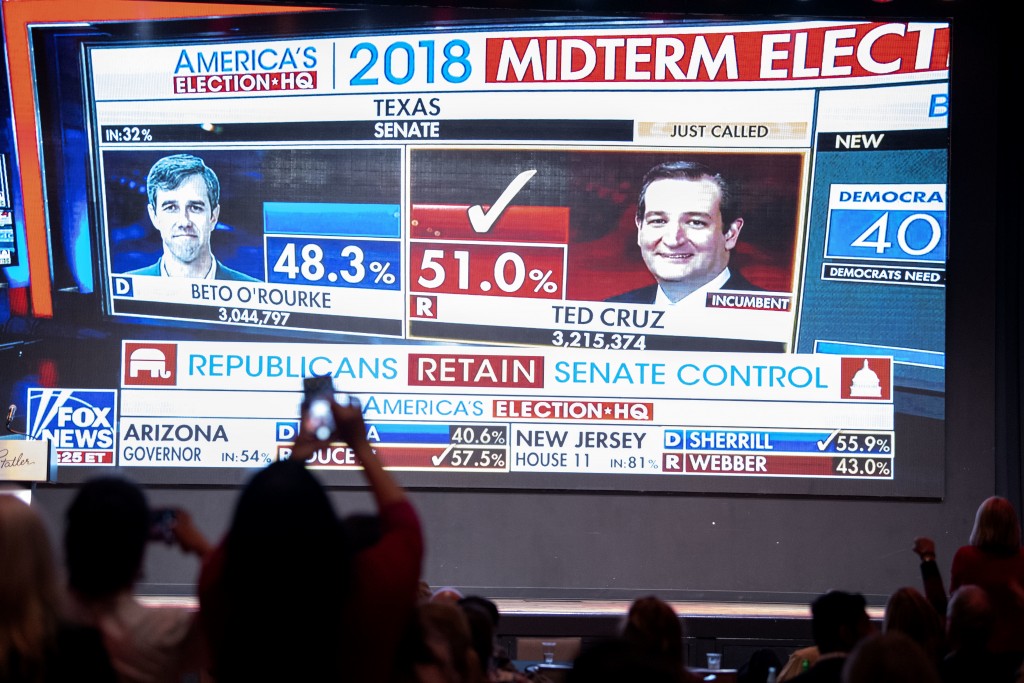 NEW YORK (AP) — After hours of television commentating, swinging needles on election meters and reams of statistics from obscure counties called up on computer screens, CNN's Jake Tapper had a revelation about Tuesday's midterm elections.

"Actually," he said, "this is pretty much what we thought was going to happen."

The House of Representatives appeared on the brink of switching from Republican to Democratic control. Republicans looked like they would expand their advantage in the Senate. Some close races broke blue, others broke red.

Polls had suggested those results for months. Networks quoted exit polls that showed two-thirds of voters had made up their minds more than a month ago.

Still, for news organizations covering the election Tuesday night, getting to that point was a roller-coaster journey of dips and dives.

Sensing extraordinary interest in the midterms, ABC, CBS and NBC devoted their entire prime-time schedules to monitoring the vote count across the country; most recent midterms had them covering the results for only one hour. Cable news networks gave it wall-to-wall coverage.

As the evening began, there were similarities to the 2016 election and President Donald Trump's surprise win. The cable networks gave attention to late-afternoon exit polls that seemed to indicate this year's vote would be a repudiation of Trump.

There were glum reactions on the set at Fox News Channel. Commentator Steve Hilton said that Trump has had a lot of achievements as president, but it seemed the midterms were becoming a battle of style vs. substance, and style was winning. Laura Ingraham said Democrats are better than Republicans in telling the story of America.

But by around 7 p.m., MSNBC's Rachel Maddow confided that she was feeling a post-traumatic stress disorder reaction to what happened two years ago.

"At some point, the Democratic confidence is going to run up against some real numbers," she said.

Many of President Trump's fans do not participate in polls, and especially won't talk to someone conducting an exit poll, said CBS' Major Garrett. Some of these voters get measured only once, on Election Day, when it really matters, and that has an impact on the predictions, he said.

Maddow's fears were soon realized and, like in 2016, Florida was a bellwether. Democrat Sen. Bill Nelson and gubernatorial candidate Andrew Gillum had jumped to early leads, but results started coming in and they fell behind. On MSNBC, guest James Carville's face looked grey.

"There was some hope the Democrats were going to have a wave election," Carville said. "It's not going to be a wave election. It could be a good election. But I see the chances of a wave dissipating every time I look up at the board."

It quickly became a common wave, nearly a cliche, across the dial: no blue wave, no tsunami. Election meter needles slipped close to the toss-up range for the House race.

"This is heartbreaking," said CNN's Van Jones, predicting that Democrats would wake up the next morning with the same sense of outrage they've felt for the past two years.

The change came like a thunderclap, and from an unexpected source. Fox News declared at 9:30 p.m. ET — a full 90 minutes ahead of rival CNN — that Democrats would win control of the House.

And as more results came in, there was another change in mood.

Carville's grin was back. He said the meter MSNBC was using to indicate the odds of House control had been driving him crazy but "I'm starting to like it as it goes toward the blue.

"I wanted to throw something at it a little bit earlier," he said.

On CNN, Jones said that "my heart has been restored." It might not be a blue wave, but given the number of women and minorities being added to the House, it's a rainbow wave, he said.

At MSNBC, before likely House Speaker Nancy Pelosi even gave a victory speech, there was a report that Democrats would seek release of Trump's tax returns. Anchor Brian Williams questioned the timing.

"Is that the right look by the Democratic Party before this night is even over to start making noise about the president's tax returns?" he asked.

In some respects, the roller-coaster ride was just beginning.