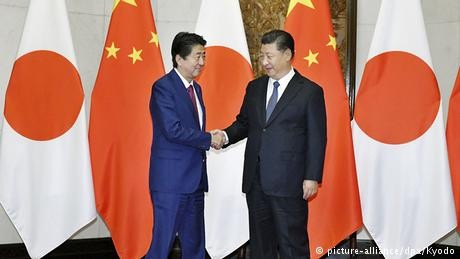 Japan and China are behaving in a more friendly fashion toward each other. Shinzo Abe's visit to Beijing last month, the first since he began his second term as Japan's prime minister in 2012, was supposed to herald a new era in bilateral relations between Asia's two major economies. Their main differences — Abe's right-wing course, the territorial disputes in the East China Sea and the still-unresolved issue of how to deal with Japan's World War II crimes — have been laid to rest for the moment. Right now, the desire is for cooperation.

There is good reason for this. Both Japan and China are the targets of Donald Trump's trade war. The US president accuses them both of exploiting the US through trade surpluses. He has imposed tariffs on most imports from China and has bullied Japan into trade talks by threatening to impose tariffs on car imports. China is Japan's biggest trade partner, and about 30,000 Japanese businesses are present in China. If China's economy suffers, so does Japan's.

At the meeting in Beijing, Japan and China signed off on about 500 cooperation deals worth $2.3 billion (€2 billion) in the areas of infrastructure, logistics, health and financial services. China also managed to involve Japan in its Silk Road trade infrastructure project without requiring too many concessions. Japan is not an official partner in the Belt and Road Initiative, which is supposed to draw Asia, Europe and Africa economically closer together. Abe was able to insist that "international standards" be applied to subprojects. In this, he is on the same wavelength as other industrialized nations, such as Germany, which have called on China to follow an "open, transparent and economically viable" approach that takes the financial situation of participating countries into account and does not plunge them into debt. Thanks to 50 new third-party agreements, Japan will be able to invest in infrastructure, including an urban development project in a special economic zone in eastern Thailand, that will benefit the Silk Road without being an official partner.

Without mentioning the US president by name in their talks, the leaders of both countries said they wanted to better protect the global trade system from attacks — for instance, by setting up a currency exchange agreement between their central banks. This will protect the financial stability of both countries, in that China and Japan will be able to lend yuan and yen to each other as necessary. The $30 billion currency swap also sends a political signal to the United States. Beijing's goal is for the yuan to replace the US dollar as the world's reserve currency, or for it at least to have equal status. Trump's rough treatment of the US's allies has played into China's hands.

The United States remains Japan's most important military ally. By visiting China and making an explicit invitation to President Xi Jinping, Abe was also sending the United States a message and asking for more attention. Abe knows that, though rapprochement with China is a reason for confidence, it is not grounds for euphoria. In October 2006, after a wave of anti-Japan demonstrations in China and at the start of his first term as prime minister, Abe became the first Japanese leader to make an official visit to Beijing in five years. Even then, there was talk of a "turning point". But then the two countries had another dispute. However, Abe has not forgotten how Trump put an abrupt end to the Trans-Pacific Partnership when he entered office. The TPP would have brought many Asian countries, including Japan and South Korea, together in a huge free trade zone with the United States. China, which was not part of the deal, would have come under huge pressure.

Two years after Trump's election, the world's diplomatic maps have been redrawn. New coalitions are emerging in Asia that would have been unthinkable in 2016. Last month, Indian Prime Minister Narendra Modi became the first foreign head of government to be invited to Abe's Mount Fuji holiday residence. At their talks in Tokyo, the two agreed to work more closely together on economic and security issues. "A strong India is beneficial for Japan, just like a strong Japan is in India's interest," Abe said. His government is trying to play a mediatory role instead of working for itself and against others. That's a remarkable development. Asian nations are becoming much more confident and are trying to work out their power struggles without the protective force of the United States, which itself tends to work in its own interests. And that's a good thing.